In 1982, 1986, and 1991, Timothy Mo was shortlisted for the Booker Prize, which means he was widely considered to have written one of the dozen best novels in the U.K. and all the commonwealth countries in each of those years. As serious fiction writers go, he was top shelf, a star, with a highly literary publisher, Chatto and Windus. But in 1987 that venerable firm became an imprint of the much more commercially carnivorous Random House. 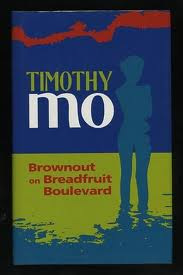 By 1994, Mo was unhappily and unsuccessfully (by his standards) auctioning off "Brownout on Breadfruit Boulevard," a scatological political satire, set in the Philippines. He was unhappy with the publishing world generally. He was unhappy to be offered only 125K £ for the rights to "Brownout" and he was even more unhappy about the dismal attention to paperback sales he foresaw, based on his past experience.

And so he set up Paddleless Press and self-published. Four years later came "Renegade or Halo2". Both were well-reviewed. In 1999, he was touting the latter and seemed chipper enough.

And then he vanished. I assume he's alive; there's no obit. There are no subsequent publications. Maybe he found out he needed a bigger feedback loop than self-publishing provides... more attention, more pomp, some of the celebrity he had turned his back upon. Maybe he was written out, although I doubt it. Maybe he's ill, or terminally pissed off. Maybe he's working on an epic.

I chanced on "Brownout" online. I'd loved Mo's first two books and for $3.87 "Brownout" could be mine, and soon it was.

It turned out to be terrific and had some special relevance for me. The book is set in the Southern Philippines, the Vasayas, in a fictional city that aspires to the mid-nineties glories of the larger, neighboring Cebu, where I happen to have spent an intense (the glories have succumbed to economics) few days a couple of months ago. And it deals, in its whole second part, with a heavy-breathing, international development conference of the kind I occasionally inhabit. As a whole, the book is hilarious and provocative.

Some people won't get past the book's first chapter -- an exercise in what one reviewer termed "a detailed and thoughtful description of coprophilia." Nice touch with the "thoughtful" part. Regardless, art has always shocked. It's a swell book that deserved an audience it didn't receive.

Mo's saga made me think more about audiences, creativity, and financial compensation, which had already been on my mind ever since my close friend of 35 years, in an excoriating email signed 'the Lamborghini-driving' screenwriter, threatened to cut our cord over SOPA. It was a Harlan County kind of thing, he said. Which side are you on?

Since it isn't my work that is being stolen, I can afford the more nuanced anti-SOPA stance -- "A serious problem that needs a more nuanced solution." But he wasn't in a nuanced mood at the time.

He calmed down later. He is not a Lamborghini-driver, of course. He could never afford the maintenance. He calls himself that in bitter jest. He's a working stiff who has a creative gift and who has spent forty years trying to exercise it inside and outside the maw of commerce.

Something has unraveled where audiences, creativity, and financial compensation come together. And now we are reweaving.

I love Kevin Kelly's "1000 True Fans" theory of how artists can approach this makeover. It's starting to happen. Have you heard about Amanda Hocking? She pulled off what Mo couldn't.

Out of the unraveling and reweaving may emerge something better: more creators earning smaller but more passionate audiences and finding a way to eat in the process. Timothy Mo set up Paddleless Press in the pre-web mid-Nineties. Today, with a database of his existing readers and SEO-savvy marketing techniques, he'd have a better chance.

I hope he finds out. 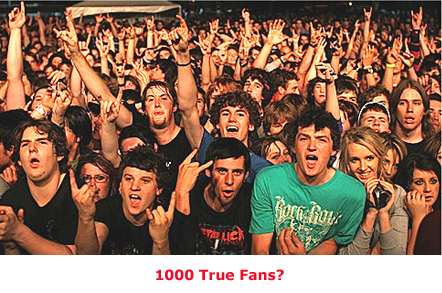