An extremely rare lunar event on the night of Jan. 4, 1912, may have set in motion history's most infamous iceberg: the one that, three and a half months later, would collide with the Titanic, plunging the ship along with 1,500 passengers and crew into the icy waters of the North Atlantic.

That's the argument from a pair of astronomers at Texas State University, anyway. Other scientists believe the researchers' case against the moon is weak.

Astronomers David Olson and Russell Doescher say they have discovered that a "supermoon" event coincided with spring tide and Earth's perihelion (the point where it is nearest the sun) on or around the same January night one century ago. Together, these events caused extreme tides that could have dislodged icebergs and flung them into southbound ocean currents. By Apr. 14, one of these bergs could have dipped just south of Newfoundland, right in time to intercept the Titanic's maiden voyage.

Though the ultimate cause of the deadly shipwreck was the failure of the Titanic crew to respond to warning messages about the icy conditions that night, "the lunar connection may explain how an unusually large number of icebergs got into the path of the Titanic," Olson said. [Map of iceberg path]

The work is forthcoming in the April issue of Sky & Telescope magazine.

If the astronomers' calculations are correct, then Jan. 4, 1912, was a truly unusual night. First, the moon's perigee, or closest approach to Earth, was the most extreme in 1,400 years, and this close approach came within six minutes of the time when the moon was full. Full moons coinciding with lunar perigee have been dubbed "supermoon" events. Second, the moon and sun were aligned that night, causing their gravitational pulls on the Earth to combine and leading to an abnormally high tide, called a "spring tide." And lastly, Earth's perihelion had occurred the day before, so the sun's gravitational pull on Earth was unusually strong that night, too, the researchers argued.

In short, the configuration of the celestial bodies "maximized the moon's tide-raising forces on Earth's oceans," Olson said in a press release. And this may have stacked the deck against the Titanic.

Icebergs wrenched off Greenland glaciers on Jan. 4 would not have had time to travel south all the way into the path of the Titanic in three and a half months. However, icebergs that had already been en route, but which had gotten stuck along the coast of Newfoundland, could have been dislodged by the extreme tide.

"As icebergs travel south, they often drift into shallow water and pause along the coasts of Labrador and Newfoundland. But an extremely high spring tide could refloat them, and the ebb tide would carry them back out into the Labrador Current, where the icebergs would resume drifting southward. That could explain the abundant icebergs in the spring of 1912," Olson said. "We don't claim to know exactly where the Titanic iceberg was in January 1912 — nobody can know that — but this is a plausible scenario intended to be scientifically reasonable." [2011 'Supermoon' Marooned Ships] 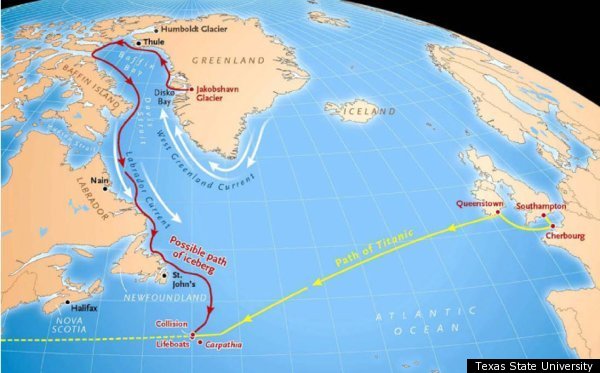 According to John Vidale, a seismologist at the University of Washington who has studied the weak correlation between ocean tides and seismic activity, the new theory is far-fetched. Worse, it's missing its linchpin: a calculation of how much higher the tides actually were on the night of Jan. 4.

"It would not be hard to compute an accurate time history of the tidal levels during those months to see just how anomalous were those few hours of critical alignment compared [with] a normal set of tides," Vidale told Life's Little Mysteries.

Without this information, it's difficult to judge the Texas State researchers' claim one way or the other, but Vidale is skeptical. "It seems quite a stretch to argue that a few hours of high tides more than three months prior would have such a dramatic effect," he said.

Some of the reasons given by the researchers for the abnormal tide are misleading, Vidale added. "The extremely close time alignment of closest approach and the full moon — 6 minutes — is a red herring. For forces and levels that cycle with a period of many days, it makes no difference whether the difference is minutes or many hours," he said. [How to Discover a Shipwreck in 5 Easy Steps]

In fact, Vidale said, Earth's perihelion and lunar perigee both last for multiple days, and so in early January 100 years ago, "it would most likely be several days of larger-than-normal tides at work, not a single high tide with a misalignment of only six minutes."

But the key question has not been answered: How much higher were the tides?

John Bellini, a geophysicist with the U.S. Geological Survey, is also skeptical. He said, "It sounds to me like the authors are teasing with chaos theory akin to the classic scenario of a butterfly's wings fluttering in one place causing a deadly hurricane thousands of miles away and many weeks later." And that doesn't actually happen.

Copyright 2012 Lifes Little Mysteries, a TechMediaNetwork company. All rights reserved. This material may not be published, broadcast, rewritten or redistributed.

PHOTOS: IMAGES AND ILLUSTRATIONS OF THE TITANIC

PHOTO GALLERY
Memories Of The Historic Titanic
Download
Calling all HuffPost superfans!
Sign up for membership to become a founding member and help shape HuffPost's next chapter
Join HuffPost