The stick lying on the sidewalk was, at first, a stick -- just a twig blown down from its tree in last night's windstorm. Then a toddler picked it up. She pointed it to the ground and it became a walking stick. She poked it into the side of the car seat my husband was carrying on our short walk, and the stick became some sort of tool. "I fixed my car seat!" our toddler announced. 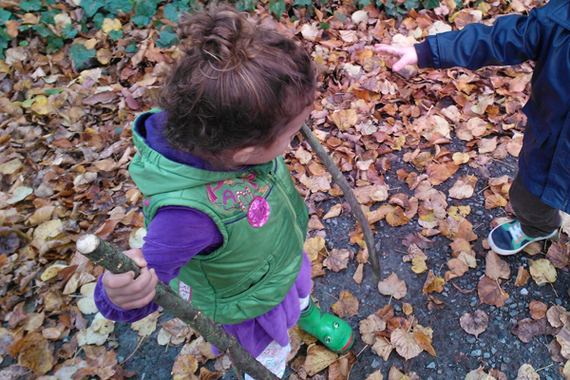 Then she was done. "Carry it," she commanded me, in the royal tone of toddlers everywhere.

Watching her gallop down the sidewalk, twirling the twig, was such a joyful reminder that tots don't need fancy toys. "The best toys don't beep, talk, dance, or flash to hold a child's attention," I write in Zero to Five: 70 Essential Parenting Tips Based on Science. "They require imagination to come alive."

What's so important about using imagination in this way?

It is what makes us uniquely human. As John Medina explains in the bestselling neuroscience book Brain Rules:

Our brains can behold a symbolic object as real by itself and yet, simultaneously, also representing something else.

There is an unbroken intellectual line between symbolic reasoning and the ability to create culture. And no other creature is capable of doing it.

Imaginative play develops the symbolic and abstract thought that underpins a culture. OK, I want that.

How do we create the conditions for our children to use their imaginations?

It's easy to see their imaginations take over outside. We may smile when our child twirls a twig and wistfully think, "Nope, kids don't need much." And then we may come home to a playroom dotted with bright red and yellow plastic talking toys. (Even if we thought we'd buy only wooden puzzles and blocks, somehow these things sneak into our homes.)

What does a playroom devoted to imagination look like? I'm getting an idea from attending a parent-child preschool class at a Waldorf school once a week. The simple toys include wooden trains and blocks without detail; pine cones and branches; a barn of felted animals; and soft, handmade dolls with yarn for hair and minimal features. They're the kinds of toys that require imagination to come alive.

Crafts include watercolors or yarn for hand-knitting. There are tools for work: pint-sized brooms, a low dish-washing station with little aprons. There's no color that's not found in nature, no plastic in sight, no screens of any kind.

Story time is a fairy tale told using felted puppets, silk cloths, and elements of nature like leaves and and chestnuts. When it's time for a snack, the children are entranced by the ritual of lighting a candle and singing a song to the fire fairies. I'm struck by how magical and childlike it all seems. And how purposefully so.

We can't always play outside in nature. But we can take a second look at the space we create for our children inside.