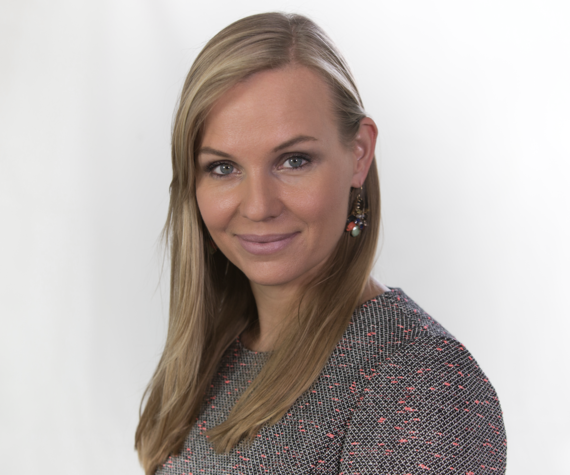 "Don't underestimate yourself and think that something is difficult because it's hard. If it is hard, it is hard for other people too. If they can achieve it, you can achieve it too. What are you waiting for? You only have one life - so don't wait to show your true potential - just go for it!"

Ella is the CMO and a co-founder of digital investment manager Scalable Capital. She combines a finance background with several years of experience building e-commerce startups. As founder and CEO of Westwing.ru she grew the site over 3 years into the dominating online player in the home & living category in Russia. She also spent 7 years at McKinsey & Company in New York, Dubai, Munich and Cologne working for private equity and consumer goods clients as well as advising banks on risk management topics.

One person I really admire, that I first read about many years ago is James Dyson. I find his story very exciting, the way he had to go through major challenges to get his product manufactured and distributed. It took him 10 years to become an 'overnight success'. He had the perseverance to keep pushing to find ways to make his dream come true. He knew that what he was designing was of great value, had a great idea and stuck with it and now he's a billionaire. I really admire how he made it happen over time, kept on going through dark moments and value that more than a quick success. It's important for people to know that this is actually the usual path, not 'instant success'. Being an entrepreneur is not an easy path to take and you have to be tough, super excited about what you do and not get beaten down when the going gets rough. Financial success cannot be the only thing that motivates you. It's an experience and a journey.

What stands out for me is spending 3 years to found and grow Westwing in Russia and building it into the largest player in the online home & living category. It was scary for me at first because I didn't speak Russian. The environment was challenging and it was difficult to be accepted as a woman CEO in Russia. I am proud that I didn't shy away from that challenge. There is still quite a bit of corruption going on in Russia and business partners often don't trust each other, so at times I was asked for my passport details and my private address as a 'mild threat' to ensure we would fulfil our contractual duties and pay our bills on time. It was much more difficult than any other experience I had in Germany, the UK, or the US and I am very proud of what I achieved and learned. I made a lot of friends and am now mentoring a few very talented young women I met during that time. This has been the most rewarding part of my time in Russia - many of the people I met there have become very loyal friends.

Being respected by investors. The VC world is even more male-dominated than other sectors and it was rare to sit in front of a woman during those meetings. I do feel that male investors sometimes struggle to connect to what you are suggesting if your business is targeted at women (like several of the businesses I have founded). They can also feel reluctant around a female CEO and think 'what if you get pregnant? I can't believe you will still be able to run the business' - though they will not tell you that outright, but I know from male colleagues or friends that these discussions come up when the woman has left the room. There is still a lot of prejudice out there that makes the funding journey for a woman entrepreneur particularly painful.

For me, the three key factors of Scalable's success are:

I would love to give my team members at Scalable more room to experiment and think on their own. As we are in a highly regulated financial environment, we have to be very careful, so I can't give them as much freedom to explore new ideas as I'd love them to have. At the same time, I need to be able to delegate more and more to my team so as not to become a bottleneck for our growth, so it's hard to combine those elements. I definitely want to spend more time on ad hoc as well as planned feedback sessions to help everyone to reach their potential.


What would you say to others to encourage them to become entrepreneurs?

It sounds counterintuitive as an answer to your question, but first of all I would say that entrepreneurship is not right for everyone. It has become a 'thing' nowadays, but you really need to think about it, before becoming an entrepreneur. Success is not guaranteed and you have to be sure you can take several failures. It's important to think carefully about it. However, I have also seen a lot of people think about entrepreneurship in what I think is an overly timid way. Most people think that if you fail, you will be doomed in your career and nobody will want to hire you any more and that your friends and family will point the finger at you. I think that after a failure as an entrepreneur, you actually become more valuable as an employee and many employers will value the skills you have acquired on your journey. I am always impressed by someone who set up their own company and then realised they were not made for that. When I left McKinsey to set up my first company, everyone there told me 'you are so brave'. But I thought to myself, if I fail, will I be sleeping under a bridge? No. I still have my previous experience to fall back on. So be realistic about the real down side if your company doesn't work out and you will see, it's usually not that terrifying.

I give direct and honest feedback and try to give it immediately. I try not to be in a situation where, if I'm unhappy with someone's work, they don't know about it. I give constructive feedback about how they could do it better. I also try to be very approachable and joke around sometimes too. I don't ever want to be seen as the boss you can't disagree with or have a conversation about why you differ on a matter. If people shut down and don't share their true opinion with you, you could end up making a wrong decision. So I enjoy being challenged by my team members.

I might micro-manage sometimes! It's probably a typical women's issue not to be good at letting go and letting their team get on with it. Women often feel insecure about their own achievements and and there is that constant 'guilt' thing there, wondering whether they've done (well) enough, whereas men are usually way more confident. It is something that a lot of women struggle with, where they don't trust themselves enough that they can do as good a job as a man.

The most important thing I would tell myself would be not to write a doctoral thesis - it is a waste of time if you want to become an entrepreneur. When I think about all the market opportunities that were out there to set up a company earlier, I could have started a company while at university. Just because you are young, it doesn't mean you can't do it, but it never occurred to me at the time that I could start a company while still studying. Getting that experience earlier on would have been great, instead of spending 2.5 years getting my PhD. On the other hand, I value the time at McKinsey. I made a lot of friends, built a network that is very relevant for what I've been doing since leaving the Firm, and I've leaned a lot during that time - how to analyse information, structure and solve problems as well as communicate with investors and many types of stakeholders.

I want to grow Scalable into a global player. We are now regulated and authorised by the FCA (Financial Conduct Authority) in the UK, so will launch our business in the next weeks, and we've been live in Germany for a few weeks. I would love to see Scalable be present in, say, 10 countries on several continents and develop into a trusted brand in the financial sphere, possibly also beyond the services we are currently offering.

On a personal level, I would like to develop a healthy work/life balance, through having a bigger team I can rely on and give them the right opportunities to learn and grow themselves. I would also love to be involved in opening the eyes of girls and younger female students about the opportunities they have to make a career for themselves, to make sure they don't take themselves out of the game too early. At McKinsey, I saw that some women left the Partner track even before they had children, because they felt they wouldn't be able to combine a role as a mother with a leadership role at the firm, despite all the support McKinsey offers to its female consultants. It's frustrating to see that many women still automatically assume that their careers will have to take a substantial step back if they want to start a family. So I want to help make women more aware about what they can do and the options available to them. It makes me a bit sad to see so many women still focus on traditionally "female" roles and sectors, which are often the ones with lower financial rewards too. I majored in mathematics at school and wrote my diploma thesis on financial derivatives, and there were not too many other women in the room with me, even though I'm sure they can do just as well as men in these subject areas. I think the media landscape has to change in the way it selects the women it portrays as role models to younger women, otherwise this bias will not go away.