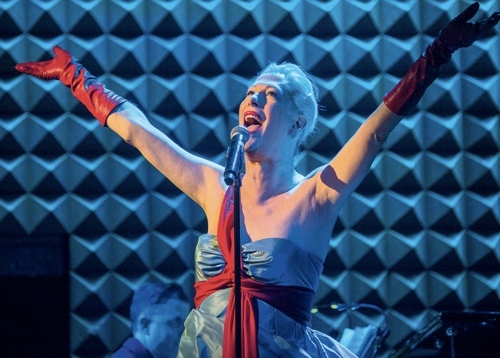 In the early 1990s, Justin Vivian Bond lived in San Francisco, and would soon move to New York, where we were both part of the cohort living through the darkest times of the AIDS epidemic, changing all of us forever. This was the time of Kiki and Herb, the legendary cabaret duo act created by Bond and Kenny Mellman.

We first met in person in 2003, after the performance of Kiki & Herb: Coup de Théatre, at the Cherry Lane Theater. The moment was brief, but I felt a sense of kinship, which we have been building upon ever since. It has been a transformative privilege to watch V move on and become the mesmerizing trans-genre artist Mx Justin Vivian Bond -- performer, singer-songwriter, visual artist and activist. Viv has the rare ability to make one laugh, cry and be moved all in the turn of a song, a phrase or the exquisite rendering of a watercolor. The looping and interlacing of the personal and the political, the public and the private, in V's work continually enthrall me. I try to catch Justin Vivian Bond in performance as often as possible. There is a transparency of process happening in the moment and, when the fairy dust settles, I come away feeling elated and inspired.

Joy Episalla: Let's talk about the songs you choose to sing. I love the way you're able to envelop me in a song, but at the same time, you are adding layers of meaning to it. There is the interplay between the personal and the political. Even though I'm looking at you, and you're looking at me, and you're telling me something, you're also telling me something else. That's the catch. That's the best part.

Justin Vivian Bond: Not everybody has a clue that it's happening, which is awesome. Sometimes drunk straight people come up to me and want to lecture me about sexuality and gender. Do they really think they're going to deliver any profound illuminations on that subject? So I just act a little drunker than them and say something ridiculous and scare them off. It's the kindest way to deal with it. There's no point in arguing with people when we're not even talking about the same thing. It can be fun, but it's also scary. People can have a violent reaction to something because they have no clue what's going on. It's out of their psychological realm to actually understand the subject. Which is sad, but it's also not my responsibility to educate them. A new paradigm is here -- it exists and there're plenty of us seeing it. Obviously, there are a lot of things I myself can't understand, but I'm not going to start pontificating about them.

Let's face it, though, part of my job is to charm large groups of people, and as I've gotten older, I've begun to see that particular part of my job as very uninteresting, tedious and energy-consuming. Over the last 20 years, I've spent a huge amount of time trying to charm crowds.

JE: Your exhibition My Model / MySelf is a pretty deep journey, also time-wise -- holding onto something, your obsession with Karen Graham, for so long and then coming back to it.

JVB: Ironically, it's about how I, as a young trans person, identified with this ideal of ultimate femininity. As an adult, I realize that she was an icon representative of capitalist society and designed to perpetuate an ideal and to sell things.

JE: But she also gave you an opportunity to hold onto a certain kind of vision.

JVB: Exactly, a vision of who I was or who I wished to be.

JVB: When I was admiring and loving her and desiring to be that idealized creature, I wasn't thinking critically. She was there to sell me an identity, and so I bought it. An identity that I couldn't even begin to have.

My interest in her wouldn't have been rekindled if I hadn't found out that she went on to become a fly-fishing instructor. I found this interview with her where she talks about being a child and sneaking off into the woods to play with the tadpoles and to sleep naked in the moss.

When I left Kiki and Herb, I went up to the Queeruption festival in Canada with Nath Ann -- we literally had just met -- and we pitched our tent over this little indentation in the forest that was just moss, and we laid with each other in this bed of moss for a week, and that was a rebirthing for me into who I am now. If I hadn't read that article about Karen Graham and her relationship to nature--

JE: --you wouldn't have noticed all the connections. She wanted to be out in nature and be a real person. 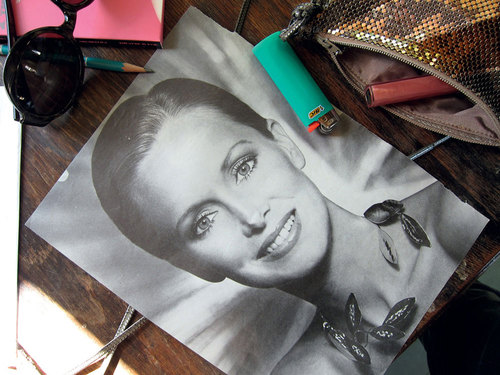 Installation view of My Model / MySelf, 2015. Courtesy of VITRINE, London.

JVB: She wasn't into those guys who would sit with the sun reflectors working on their tans. (laughter)

JE: In your essay on Karen Graham in the 2014 Feminist Press anthology ICON, I read that you were already recontextualizing as a young child without completely being aware of it. For a young person, it's an important revelation: you can know something about yourself, but not everybody else needs to know.

JVB: I was mentoring four performers recently at the Tyrone Guthrie Centre in Ireland. We created a space with the five of us, wherein they could be as vulnerable as they needed to be, without any judgments whatsoever -- with critical thought, but not critical judgment. They got to be incredibly open with their feelings and thoughts, and with their attempts. It was beautiful and moving to watch their experimentation. After about five days of that I said, "It's good that you can get to that place while we're here but you don't need to do that anywhere else. Just because you're capable of it doesn't mean you need to share it. You can change it, you can use it in whatever way you need to."

JE: What a gift that is, what a keepsake.

JVB: I wish someone had told me that when I was young. I wish I'd had a place where I felt safe enough to be vulnerable. But I didn't -- not with my family and not in my acting school.

JE: Seeing you perform and looking at your art, hearing you read, being with you across the table, gives me that serene sense of grace that you have.

JVB: Thank you. I probably got that from my grandmother. She used to tell me stories about the old days. I hardly remember them but in her presence I learned how to be a witness for what she had witnessed and how to tell stories myself. The gift she gave to me was the grace of listening and from that I learned how to just be.