A transgender woman in Scotland is demanding an apology after workers at the courthouse who handled her divorce proceedings left a shocking and offensive Post-it note attached to her court documents.

As The Daily Record originally reported, 51-year-old Becky Kent found the handwritten note on the top of her divorce decree. The note allegedly read: "Colin it's right! Man -- changed his name to woman's name -- statutory declaration attached! Takes all sorts!"

Take a look at a photograph of the alleged note below, then scroll down to keep reading: 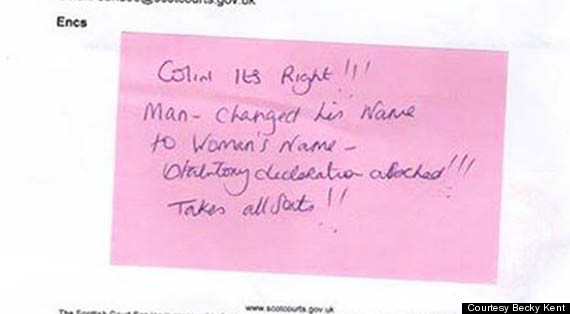 "I came to Scotland because of how forward thinking the people are when it comes to gender equality and for the most part everyone has been so supportive," Kent said in a statement to reporters, as cited by Deadline News. "But when I opened that letter on Monday I was just like, ‘Wow.’ I couldn’t believe how ignorant it was."

She continued, "Firstly, how can you be so stupid that you don’t remove a Post-it note like that before sending it? Seriously, where is the common sense? But most importantly it’s alarming how they could go against their own equality policy which says they will treat people in protected groups with dignity and respect.”

Kent reportedly demanded a formal apology and asked that the court redraft her divorce documents with the correct titles.

A Scottish Court Service spokesperson apologized and stated that staff would be reminded of the court's policy, according to The Herald.

“We would like to offer our sincere apologies to Ms. Kent for her recent experience," the spokesperson stated, as per The Daily Record. "We strive to treat all court users with dignity and respect. We will investigate this incident and take appropriate action.”

This isn't the first time that mistakenly documented transphobia has landed an individual in hot water. Earlier this year, Oregon bar owner Chris Penner left a voicemail asking a group of transgender women to no longer patron the establishment, as he worried individuals were going to consider it a "tranny bar" or a gay bar. Penner ended up paying a $400,000 fine for discrimination.