I've really struggled as a writer to talk about the tragic shooting of unarmed Florida teen Trayvon Martin by George Zimmerman, who has still not been arrested or even charged. While media discussions swirl about so many other issues, for me it boils down to a central point that, according to 911 calls, Trayvon Martin was viewed as "suspicious" by Zimmerman simply for being black. And that basic issue, the scary look at how race can dangerously shape perceptions with deadly results, is what has struck me to the core.

You see, I have a black son.

Back when we lived in Florida, my husband and I became foster parents to a young black teen who needed a home. He joined us when he was 16 and we quickly built a family together. While he may have long ago grown up and moved out, he is still part of our family and always will be. 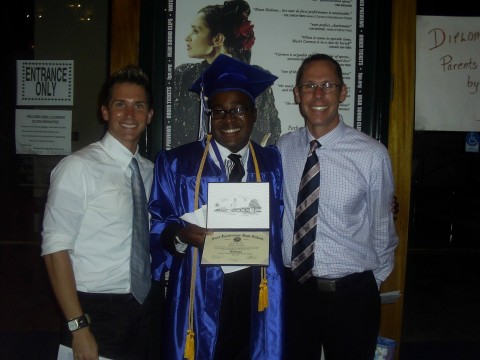 It is his face that I see when I see Trayvon Martin. The face that I drove to school every day. The face of a son that whose tie I tied for prom. The face that we laughed and cried with. I cannot even begin to fathom what Travyon's parent are going through -- trying to imagine their pain chills me to the bone.

This death, and the injustice of the response, should chill us all. The shooting, and the ugly racial attitudes that appear to have led to the targeting of Trayvon, should make us all take a step back and really examine the tough issues at the heart of it all.

To be blunt, seeing the world through my son's eyes was a huge teachable moment for me. I had no clue what it was like to be a young black man in America today. While I liked to think of myself as 'evolved and aware' of racism, the day to day experience of having women clutch their purses when my son walked by or having security guards follow us in stores was still shocking. I even watched a bank refuse to open an account for my son until I came in with him. Long talks with him about the suspicion and danger faced by people of color on a daily basis gave me insights not only into his experience, but into my own position of blind privilege as a white man.

And that's the point -- I still don't know what it's like to be a person of color in America. I never will. But I can open myself to the thoughts, feelings, and struggles of others that are different than me and accept their life experiences that I can never fully understand.

While America could be having this very same teachable moment by listening and accepting the life experiences of others, of people like Trayvon and my son, it seems we're not. Here in Illinois, for example, Rep. Rich Morthland (R-Cordova) has said that while Trayvon's killing was a 'tragedy,' he intends to reintroduce a "Stand Your Ground" bill, similar to Florida's. But the refusal to learn from, or even listen to, the experience of black Americans goes far beyond tone-deaf politicians -- it's all of us.

It's never an easy thing to talk about the ugly side of our society. Shining an uncomfortable light on things like racism, social injustice, and ingrained bias make us see the faults in ourselves. We see our failings, no matter how 'evolved and aware' we think we are, and it hurts. But that pain is nothing compared to the pain Trayvon Martin's parents feel at his death -- or the pain that every parent feels as they have to look into the eyes of their child as they try to explain the hate they will always face simply for the color of their skin.

Admitting the role we all play in creating the atmosphere that led to Trayvon's death is hard, but it is a small step in trying to learn and change. We owe all our kids, and each other, at least that much.