In one of her earlier bodies of work, "My Idyllic Marriage," the artist Wendy Nanan sought to come to terms with her home country of Trinidad as a place of "the intermingling of cultures." Nanan says, "Here in Trinidad we have La Divina Pastora, a very dark image that Indians worship. But what is so interesting about La Divina is that Hindus and Catholics share her, as well." What the artist would end up doing is taking two statues that are venerated by two different religious traditions and encasing them in their own house so that they could learn to live together. "That, for me, is the reality of what it means to be Trinidadian," the artist says.

Finding one's place and claiming that place are central to the work that Nanan does. Nanan was born into an Indian family in Port of Spain, the capital city of Trinidad, where her father was a businessman and her mother worked alongside him in the business. She has four brothers and three sisters, all of whom would go on to attend university. Nanan admits that while growing up, her father did not know much about art. But that did not prevent him from encouraging his daughter's artistic leanings. "My father would sit outside and wait for me as I walked around in museums," she says.

In high school Nanan would be introduced to a new art teacher from England who, she says, "opened my eyes" to art and encouraged her to think broadly about it. After finishing high school she went on to do a bachelor's degree in England before returning to Trinidad to settle down and work. "When I came back to Trinidad from England I really struggled a lot as an artist and a person," she tells me. "I struggled to understand where I fit in the society, but I also struggled as an artist. Our art traditions are large enough, I believe, to encompass everyone, but it seemed that there was a preference for naïve/touristic kinds of work as opposed to the more trained and contemporary works that I was doing. Unfortunately, I think that this spilt still exists in our society, and it is very unfortunate."

If Nanan struggled because of the more trained work that she was doing, she also struggled in her society by being an Indian woman artist. "People just weren't used to it back when I was leaving high school in the 1960s," she told me. "People just weren't used to a young Indian woman working on murals or making art. Because of this I was always seen as strange, and it was not that I was even the first Indian woman artist in Trinidad! For me the struggle was many-fold because I had to struggle to say who I am in a colonial place, and there were class restrictions as well. If you were a middle-class person - a middle-class woman - you should have certain goals of wanting to get married and raising a family, which were never my goals. Instead, I was very focused on trying to understand the place that I call home."

In that regard, one event that particularly stood out for her happened when the West Indies cricket team beat England's cricket team in a match. It seemed to Nanan that the slaves had taken over the master's game and she found herself going to cricket matches at the Oval, where she started doing a series of drawings that would morph into automatic drawings, drawing the cricket scenes without looking at the paper or the ink before her, but instead keeping her eyes focused solely on the game. "I think that was perhaps the best work I have ever done," the artist says. "Those cricket drawings. I developed a way of drawing without thinking. My hand just drew what I saw. I gave my mind up, my thought process up, and I just flowed with the process."

All the while she was working hard to break into what she calls the "all-boys system of buyers and collectors and government people responsible for collecting art on the island of Trinidad."

In fact, the "My Idyllic Marriage" series of works would see Nanan in 1989 get her first solo exhibition at the National Gallery in Trinidad. "I guess I was granted the show," the artist reflects, "because I used our traditional forms in the making of the work and I made references to aspects of our culture that any Trinidadian could easily grasp. These works still excite me because there is a crudity and honesty to them. I did four baby Krishnas, for example, but now the Krishnas had Christian wings and they were holding things deeply symbolic for Trinidadians - an enamel cup with oil coming out, another one held the doubles that we love to eat in Trinidad. I guess what I was saying with these works is that we have to rely on the things we have invented ourselves on this island and to value what is special to us and indicative of us as Trinidadians."

Given her emphasis on Trinidadian culture and identity, the 50th anniversary of Trinidadian independence in 2012 found the artist wondering how much Trinidad had really changed since gaining Independence from Great Britain. Her conclusion was that there had been very little change since Independence. For one thing, the society, as she sees it, seems to be stuck in class binaries. Nanan's response to this realization was a quite telling series of heads plastered with stamps, in which she is riffing on the Queen of England.

For her latest body of work, though, Wendy Nanan has gone back to tackling the subject of her placement as an Indian woman artist in Trinidad. But this time the answers she offers are more contemplative and accepting, if not outright bursting with life and fertility. "In this latest body of work," she shares, "I have taken the viewer with me to some of the places I love to go walking in the mornings. On these walks I often collect pods and seashells from the beach, and I have been collecting these for years now."

The pods are lined in vegetative-like structures that resemble wombs being lined with eggs which literally seem to be coming off the gallery walls. There is a symbol that looks like a phalanx ready to protect and defend all that is natural. The cycle of life is invoked in these works as is fertility and fecundity and even mortality. There is the sense that the artist has emphatically found her voice.

"For me, it was important to find my place in the world and the place I have found for myself in Trinidad. My advice to young artists, especially young Trinidadian artists, is to get out and see all that you can. I think that is very important and I am glad that I left Trinidad for a few years. But for me, Trinidad is where I belong. Of course, I know that people look at me as very foreign and different because of personal choices I have made in my life regarding marriage and children, but still I feel very grounded in Trinidad. The landscape of the country is running through me like a river. I know that road through Manzanilla so well that it feels like my blood running through my veins. I have to be here and claim this place. Trinidad is my place. I think this is what viewers are seeing and sensing in my latest body of works." 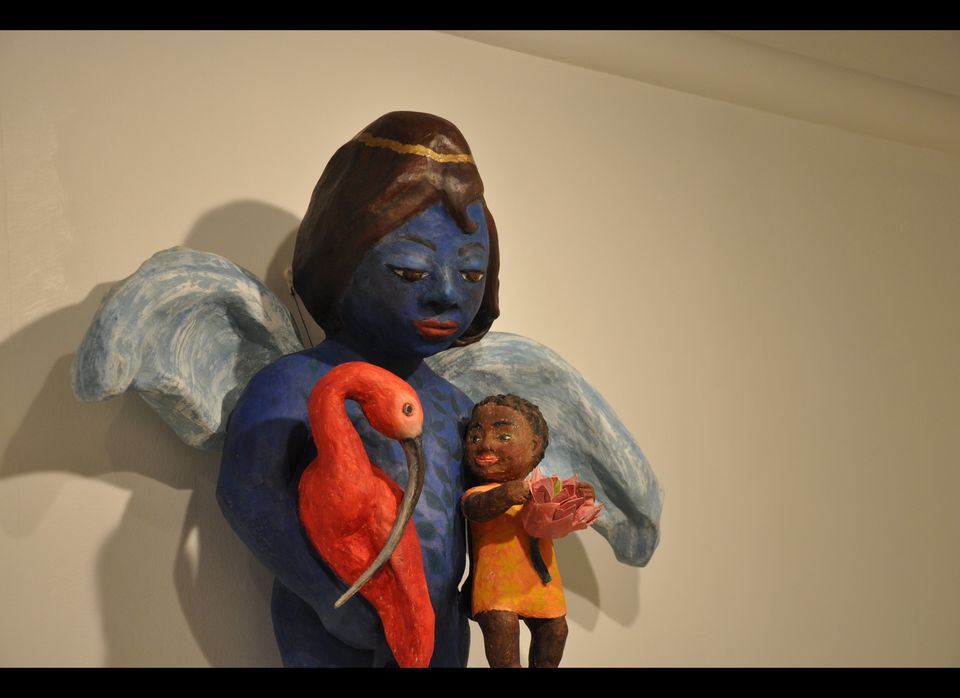