Some common hardware supplies are being used to help send this turtle on a road to recovery.

The Wildlife Rehabilitation Center at the Wisconsin Humane Society recently took in Gertie, a painted turtle who was found on the side of the road after she was hit by a car. The turtle's shell was left shattered, so Scott Diehl, the center's director, used epoxy glue and cable ties to mend it back together and allow the animal to heal. 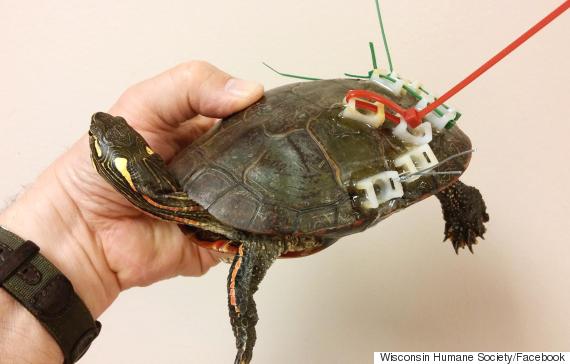 Gertie the turtle after cable ties were added to help her shell heal.

After she was brought in, Gertie, who would likely have died within a day without help, first had her wounds cleaned and debris removed, Diehl told HuffPost. Afterwards, cable tie mounts were attached to her shell with the help of the epoxy glue. The ties were later sewn through the mounts and tightened until the pieces of the shell were brought together. As Gertie heals, the pieces of her shell will reconnect on their own.

"It's like any other [human] fracture, where you bring the broken bones together as close as you can," Diehl said. 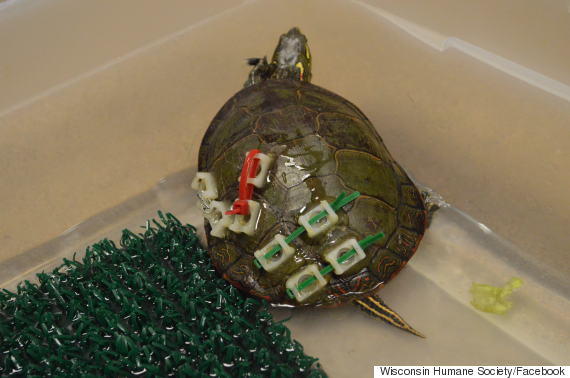 While these materials may seem unusual for a job like this, Diehl told HuffPost that this method has been used before to help turtles with fractured shells recover. He explained that he preferred using epoxy glue and cable ties, which is less invasive than other healing tactics.

"The turtle would have to be under anesthesia," Diehl said, describing one alternate method. "The vet would ... pull various pieces together using wire that's passed through holes [which] are drilled adjacent to one another on the various pieces."

So far, Gertie is recovering nicely and has been given pain medication to stay comfortable, Angela Speed, the group's vice president of communication, told HuffPost. As she gets better, the rehab center will move her to larger enclosures, eventually bringing her outside to get her acclimated to the outdoors before they release her. The cable ties will be gradually taken off as well as her shell heals.

Diehl says he hopes that Gertie will be ready to be released back into the wild in August.

Sweaters For Pet Turtles And Snails