There's a new thriller out this weekend, concerning the 18th Apollo mission to the moon (and the scary things which, in 1974, allegedly occurred there), and there is some speculation on the part of its producers as to whether the footage is "real" or not. Okay, Messrs. Weinstein, fair enough. We'll run with that. I've had a look at the trailer for Apollo 18 and, apart from its outer space setting, it features a montage of two lunkheads going crazy and yelling and smashing stuff. Either this is a movie about a covert lunar landing gone horribly awry -- or it's a metaphor for what happens when you blindly pick a roommate off Craigslist. 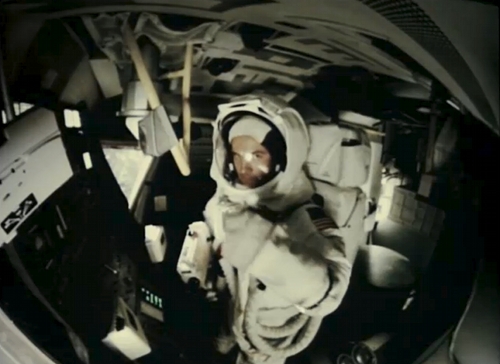 But anyway, they wouldn't show us Apollo 18 in advance -- and it seemed a stretch to review the excellent They Might Be Giants album of the same name -- so instead I spoke with author (Unsolved UFO Mysteries, Star Trek Cookbook), behavioralist/sociologist and extraterrestrial scholar (publisher of UFO Magazine, host of History Channel's UFO Hunters) William J. Birnes, who enthusiastically answered my questions as to whether or not there are really any nasty bugaboos wandering around on that big pretty orb in the sky where we humans fleetingly used to go but mysteriously don't go anymore.

Mr. Birnes proves immediately engaging, as this material falls well within his best-known field of expertise. The man also knows his movies (we talk classics: The Day the Earth Stood Still, Earth vs. the Flying Saucers, Invasion of the Body Snatchers), thus it is with considerable effort that I withhold my Pink Floyd/Wizard of Oz question, and instead ask him whether or not the U.S. government covertly sustains a presence on the dark side of the moon. 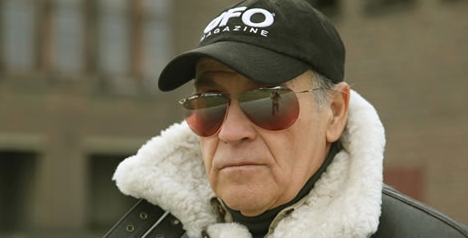 The celebrated UFO-ologist then cites his book, The Day After Roswell, regarding the U.S. Army planning a fully functional lunar military base ("Project Horizon") on the dark side of the moon, dating back to 1954. Intriguing! (Plus we get a cool Space: 1999 nod in there.) But oh, does it get better. Let's talk aliens.

"I do believe that at least part of what those plans were about," continues Mr. Birnes, "was for a strategic planetary defense against UFOs. And you'll say, 'Bill, you're out of your mind. What are you saying? Where's the evidence?' Well, here's the evidence: In 1952 -- again, this is not speculation -- there literally was a flying-saucer invasion over Washington, D.C." Referencing another of his books (Aliens in America), the watcher-of-skies recounts USAF General John Sanford telling America the UFOs were bogus; then, four years later, Project Blue Book leader USAF Captain Edward Ruppelt refuting Sanford's alleged cover-up, telling America that, yes, indeed, the invasion was real. Mr. Birnes also assures me that Eisenhower (with Churchill in tow) personally observed (and covered up) a UFO encounter over the North Sea. (Incidentally, be warned: You can blow a whole day viewing clips of this stuff on YouTube.) 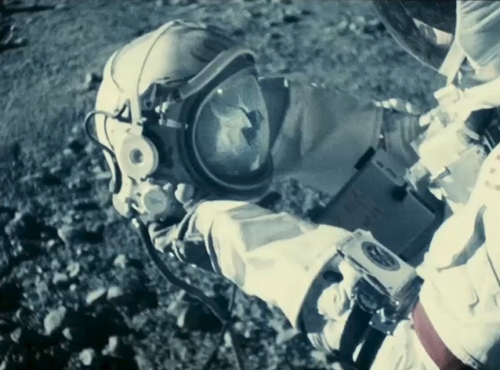 But I want to know about the aliens. Do they like us? Do they hate us? Do they think we're merely stupid primates, placed here to entertain them?

William J. Birnes deftly deflects my (standard-issue) question regarding why, if aliens are real, they don't just land in suburbia in broad daylight and say hello. (He figures they're not terribly interested in us. Perhaps they've seen Jersey Shore?) But moreover -- and this actually makes some strange sense -- he espouses the theory that there are many species of alien, some benign, some hostile, intermingling with our collective human experience. These tangents prove fascinating -- Biblical, Native American, even genetic -- however I must steer us back toward the moon.

Former NASA photo-lab employee Donna (Teitze) Hare comes up, as Mr. Birnes notes her testimony that NASA routinely airbrushed out any and all alien details (spaceships, lunar buildings); and further, that the aliens made it very clear to NASA not to return to the moon -- especially to its dark side. Back in the mid-'60s, an Air Force technician friend of Mr. Birnes (whom he protectively grants anonymity) is cited to have lucked into viewing more photos of structures on the moon. I want to know: alien or terrestrial construction? "Well, that's the thing!" exclaims the specialist. "They were kind of circular, dome-like structures -- it didn't look like the campus of Microsoft. Did they look alien? Yeah, they looked ultra-modern, like beyond Frank Lloyd Wright." Further, the tech's very life may have been endangered by viewing the highly classified materials. Spooky! 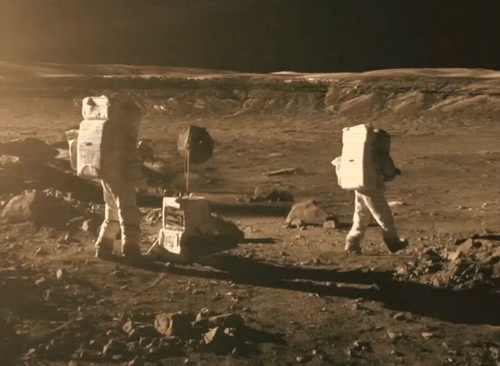 But we're talking about a movie here. I bring up the theory that perhaps the first manned lunar landing was a clever hoax (Please, Mr. Aldrin! Just theorizing! Ow!) -- you know, that it was simply Stanley Kubrick filming the astronauts on a soundstage -- which is, um, exactly what the movie Apollo 18 is; minus Kubrick; plus director Gonzalo López-Gallego (Please, Mr. Weinstein! Just stating facts! Ow!) -- and Mr. Birnes has astute words for this notion as well.

Alien lunar bases? Covert U.S. government lunar bases? Both? Does one hand (NASA) not know what the other hand (the military) is doing? I don't know, and Apollo 18 didn't have a midnight screening -- but Mr. Birnes does have some strong feelings about humankind going back to the moon:

Obviously there's some policy reason we're not doing it -- whether it's, 'We don't want to fight with the extraterrestrials,' or whether Obama is leading from behind, and letting the Russians, the Indians and the Chinese go first, you know: 'You guys get your ass kicked! Why should we?' My attitude is, I think that when you look at the missions that are being contemplated now -- 2025 to an asteroid; and 2030 to Mars -- it would've been far more efficacious for us to have kept going to the moon! Build that moon base! Establish a permanent base on the moon! Why fight with the Russians and the Chinese? C'mon, guys! You've got money! We all want the minerals. We're not gonna kill each other. We've had nuclear weapons aimed at each other since 1948, we haven't used 'em, why would we use 'em on the moon? That's dumb. Let's all make some money here! I mean, the moon's great! I would've continued on the moon. I would've built international spaceships, and I already would've been exploring some of the solar system by now -- thirty, forty years after the last Apollo mission. It makes absolutely no sense that we stopped going to the moon.

Now, with thanks to Mr. Birnes and noting of course that I am quite happily an Earthling, herein delivering an entertainment piece entirely devoid of any personal opinions on the subject of aliens and those shady government guys who love to tussle with them, I invite our HuffPost readers to opine about Apollo 18 and associated topics in the Comments section.