UNITED NATIONS -- The woman is perfect for the job of heading a new U.N. women's "entity." The question is whether she will have more than potential, such as finances, staff and recognition rather than contributing to the blizzard of documents on promoting and protecting women.

Michelle Bachelet (full name: Verónica Michelle Bachelet Jeria) is an accomplished figure in her own right -- former president, defense and health minister of Chile, a survivor of torture under the Augusto Pinochet regime that killed her father, a pediatrician, a linguist (Spanish, English, Portuguese, French, German) -- and a single mother of three.

In 2008, Time magazine ranked Bachelet, who turns 59 this month, as number 15 on its list of the world's 100 most influential people. Her name had been bandied about for months with some compatriots wondering if the job was too limited for her. She had considered remaining active in Chilean politics after leaving office in March with an 84 percent approval rate. But diplomats said it was hard for her to say "no" after intensive lobbying.

The initial budget is supposed to be $500 million but it is based on voluntary contributions, which could be a financing problem in the future. The new body, operational early next year, will have an executive board of 41 members spread through regions around the world.

U.N. Secretary-General Ban Ki-moon, who announced the appointment on Tuesday, has said that he appointed more women to senior posts than at any other time in the history of the UN, including nine women to the rank of under-secretary-general. The number of women in senior posts has increased by 40 per cent under his tenure, he said. Earlier this year he named Margot Wallstrom of Sweden as the first special representative on sexual violence in war zones.

Still the current crop of women, with notable exceptions, has been subdued and rarely raises a battle cry for equality around the world compared to 10 years ago. That cabinet, under his predecessor, saw Sadako Ogata of Japan, Carol Bellamy and Catherine Bertini of the United States, Gro Harlem Brundtland of Norway, Dr. Noeleen Heyzer of Singapore. And before that reigned Dr. Nafis Sadik of Pakistan, the legendary head of the UN Population Fund who campaigned for women's reproductive rights at the 1994 Cairo conference on population.

But Bachelet is no a shrinking violet on women's rights. The question is whether she will get enough money and whether enough governments will want to work with her. Women in the developing world make up the face of poverty, are victims of HIV-AIDS and die in childbirth because of lack of health care and birth control.

"As a pediatrician and epidemiologist and the first woman president in the history of Chile, President Bachelet is acutely aware of the challenges that affect women, particularly in the developing world. As President, she was a tough and seasoned diplomat and a popular head of state who demonstrated a talent for bringing people together."

"Bachelet... has distinguished herself as a champion for those who do not always have a voice. She was instrumental in pushing for a stronger network of social protections for Chile's poorest and advocating for laws dealing with violence against women. In her new role, Bachelet will be responsible for elevating the rights and needs of women and girls across the globe, including the 330 million women who comprise the world's working poor."

Irina Bokova, the Bulgarian director general of the UN Educational, Scientific and Cultural Organization (UNESCO), was the first to speak up: "The creation of UN women... was already an important development. It becomes even more significant now that a person with the talent and experience of Michelle Bachelet has been named to direct it." 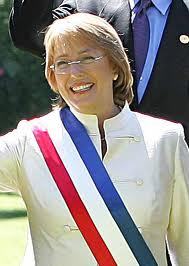