The streets of Paris overflowed on Sunday, as more than a million people converged on the capital to take part in a march for national unity. Among the masses gathered around the Place de la Republique square were over a dozen world leaders, as well as members of a swath of France's political parties.

Demonstrators carrying French flags and the ubiquitous "Je Suis Charlie" signs stretched along two separate routes toward the Place de la Nation. The area was closely guarded by hundreds of troops and police. Sunday's government-sponsored rally comes after extremist attacks last week claimed the lives of 17 victims. The crisis began with an assault on the Charlie Hebdo satirical newspaper offices, which led to a multiday manhunt, and culminated in two deadly hostage situations.

France is still reeling from the events, which newspaper Le Monde equated to a French 9/11, and there has been fear over the effect the attack will have on an already tense society. In the days following the killings, several reports of Muslims being targeted in racist or violent incidents have emerged. France's Jewish population is also on edge, with reports of an increasing number of Jews leaving the country in fear, as well as Israeli Prime Minister Benjamin Netanyahu encouraging emigration following the killing of hostages in a kosher supermarket late last week.

At the rally on Sunday, however, the tone of French unity was at the forefront, with Prime Minister Manuel Valls declaring, “We are all Charlie, we are all police, we are all Jews of France." 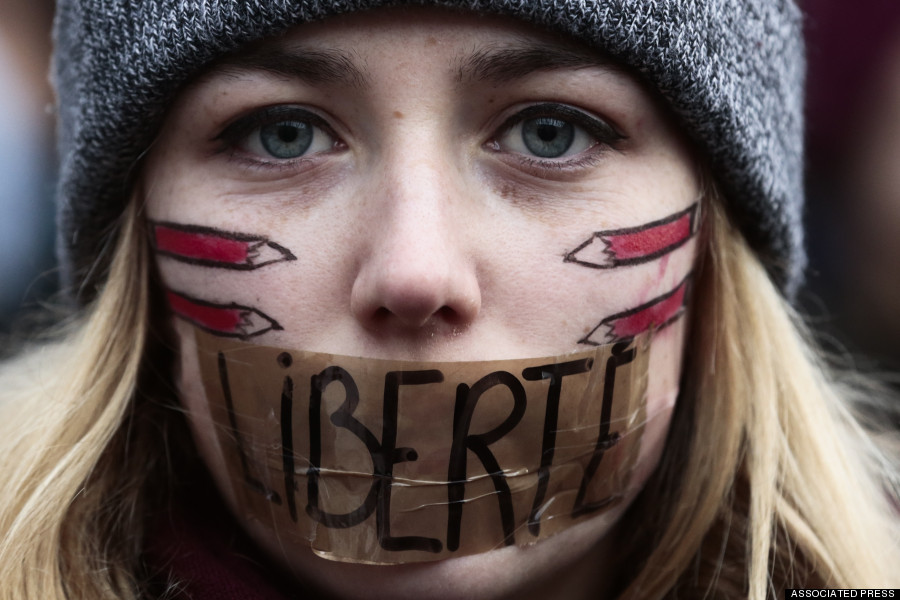 A woman has taped her mouth displaying the word Freedom on the tape, as she gathers with several thousand people in solidarity with victims of two terrorist attacks in Paris. (AP Photo/Markus Schreiber) 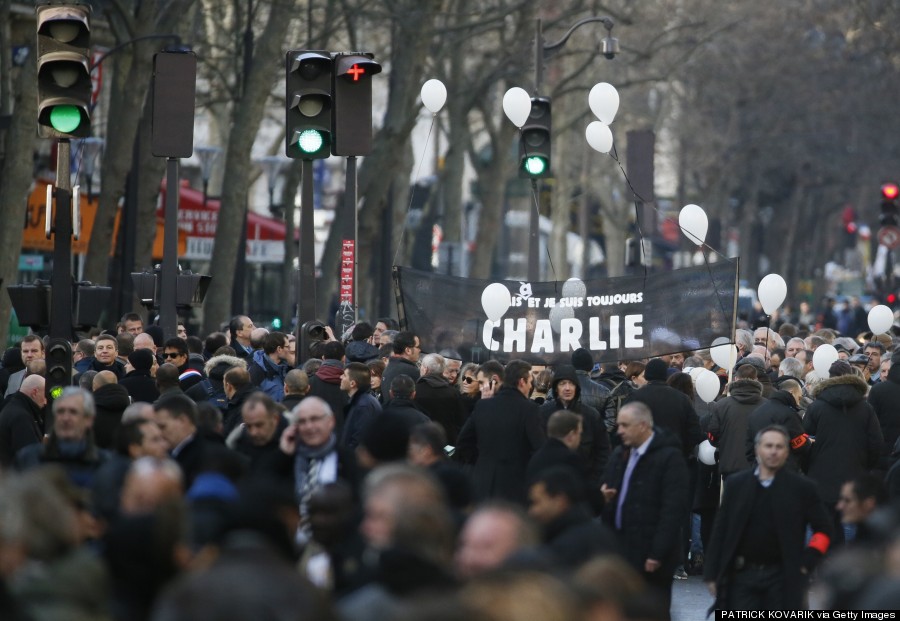 People take part in a Unity rally Marche Republicaine in Paris on Sunday in tribute to the 17 victims of a three-day killing spree. (Photo: PATRICK KOVARIK/AFP/Getty Images) 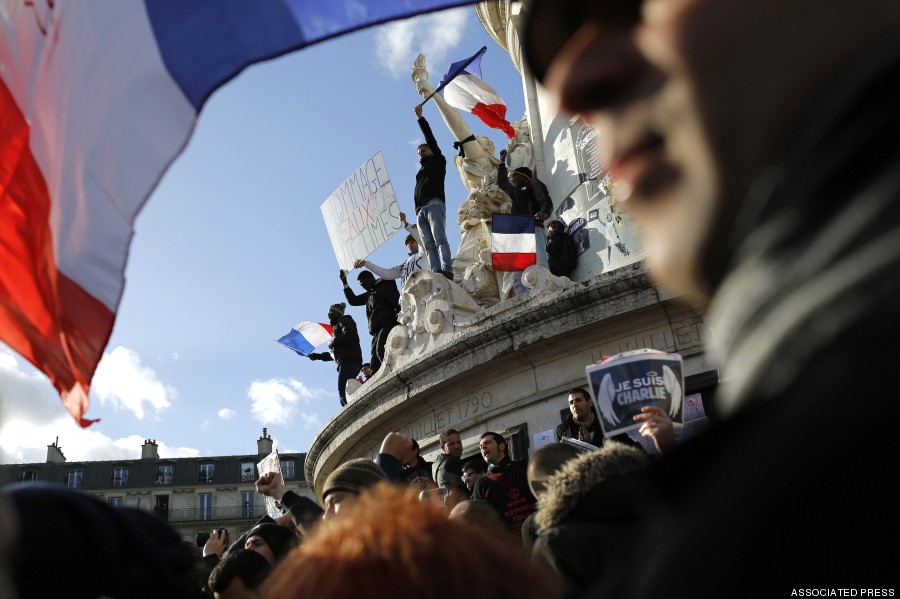 Demonstrators wave flags on the monument at the center of Republique Square before the demonstration, in Paris, France, Sunday, Jan. 11, 2015. (AP Photo/Laurent Cipriani) 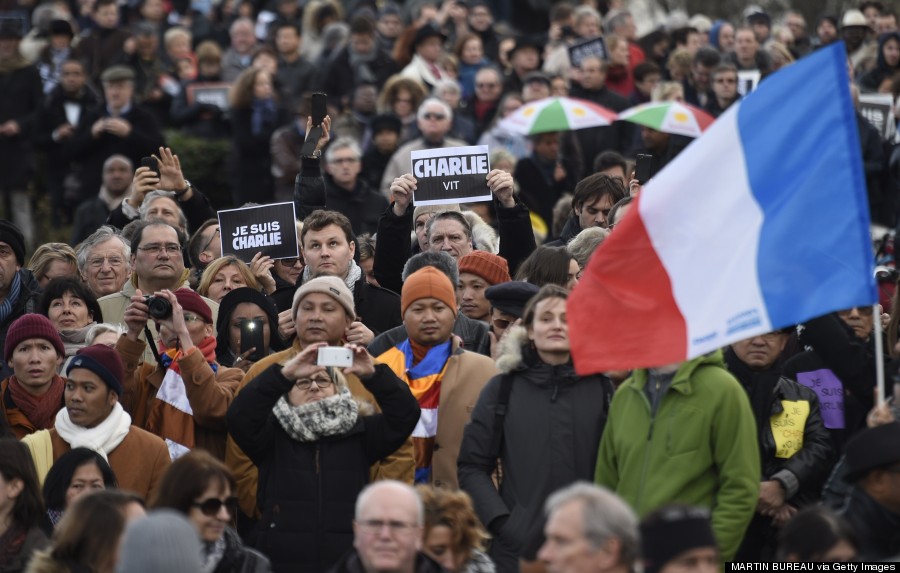 People hold signs and the French flag as they gather at the Place de la Nation during the Unity rally Marche Republicaine on Sunday. 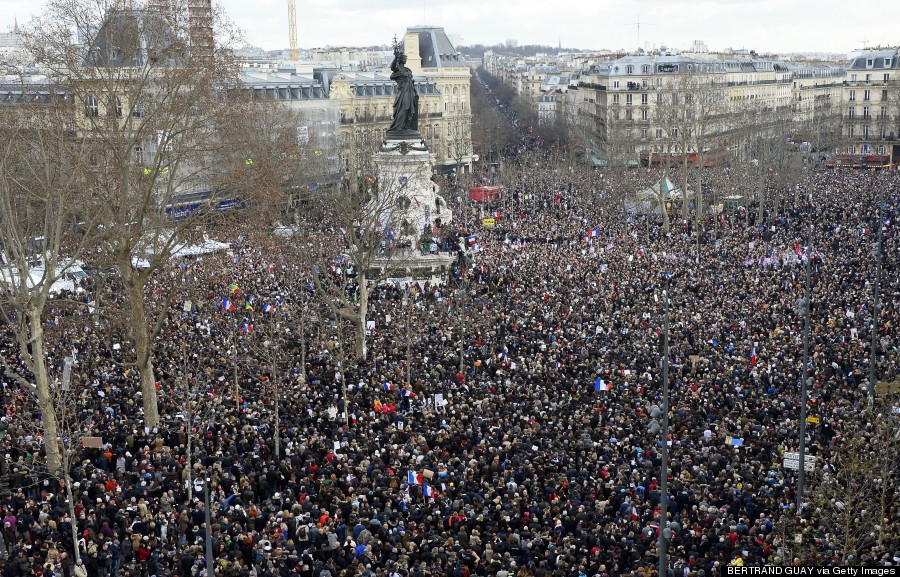 People gather on the Place de la Republique (Republic Square) in Paris before the start of a Unity rally Marche Republicaine on Sunday.
Advertisement 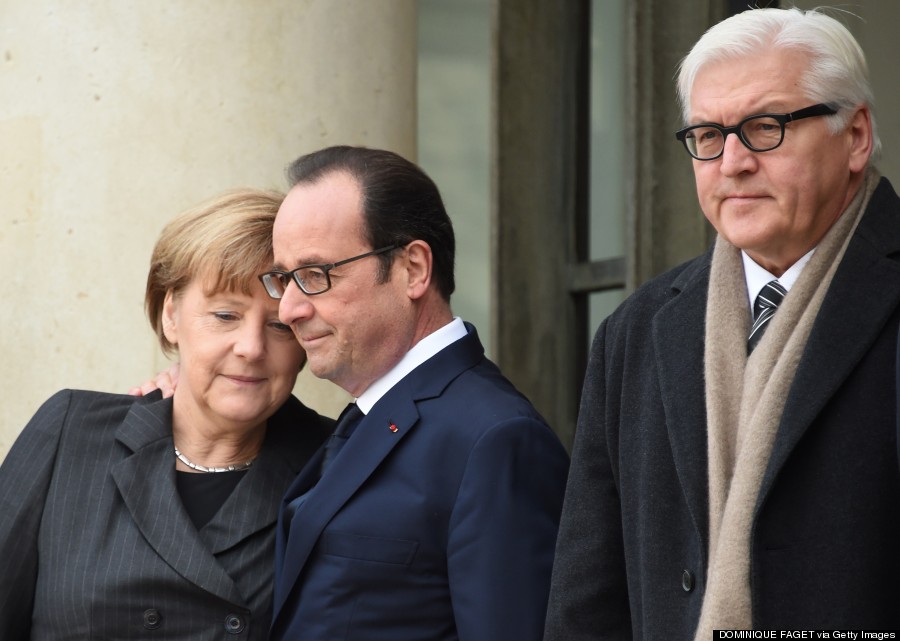 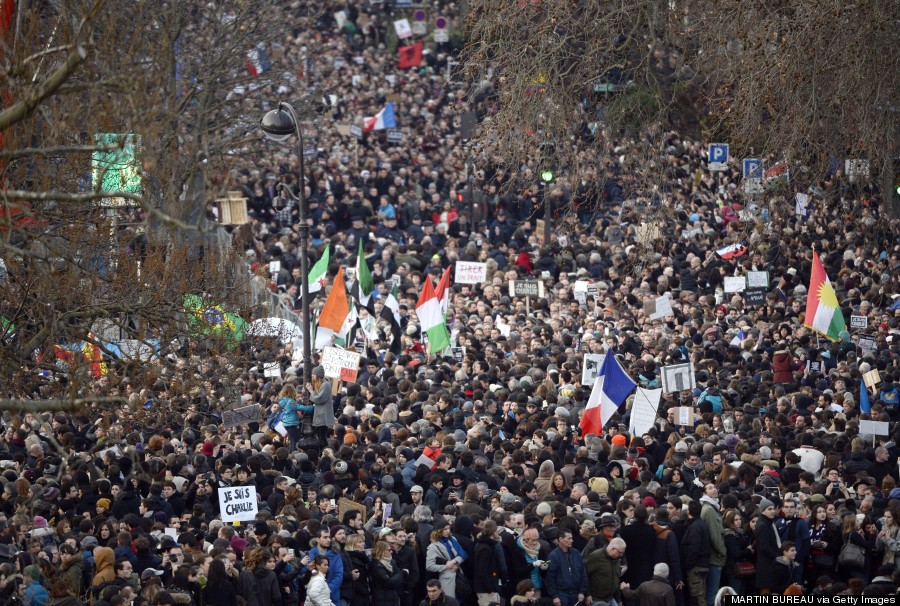 People wave flags from different countries as they take part in the Unity rally Marche Republicaine on Sunday in Paris in tribute to the 17 victims of a three-day killing spree. (MARTIN BUREAU/AFP/Getty Images) 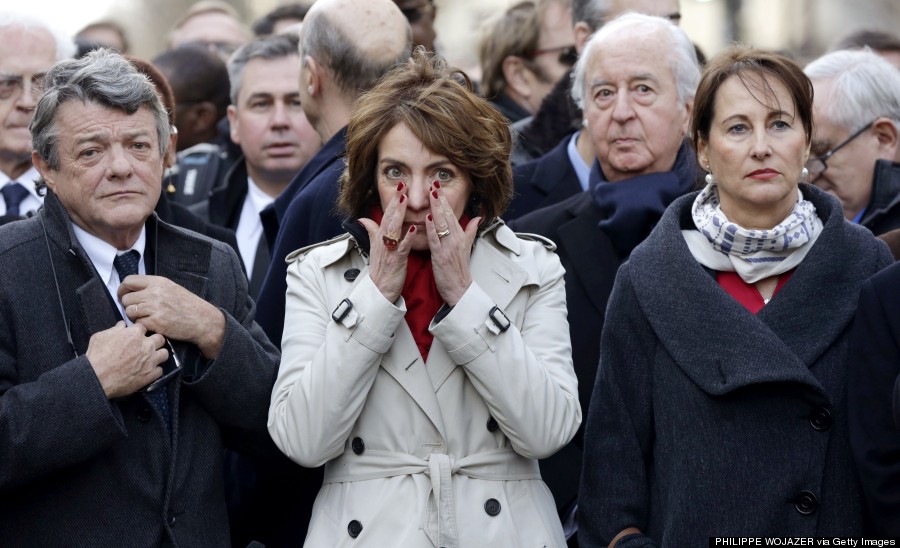 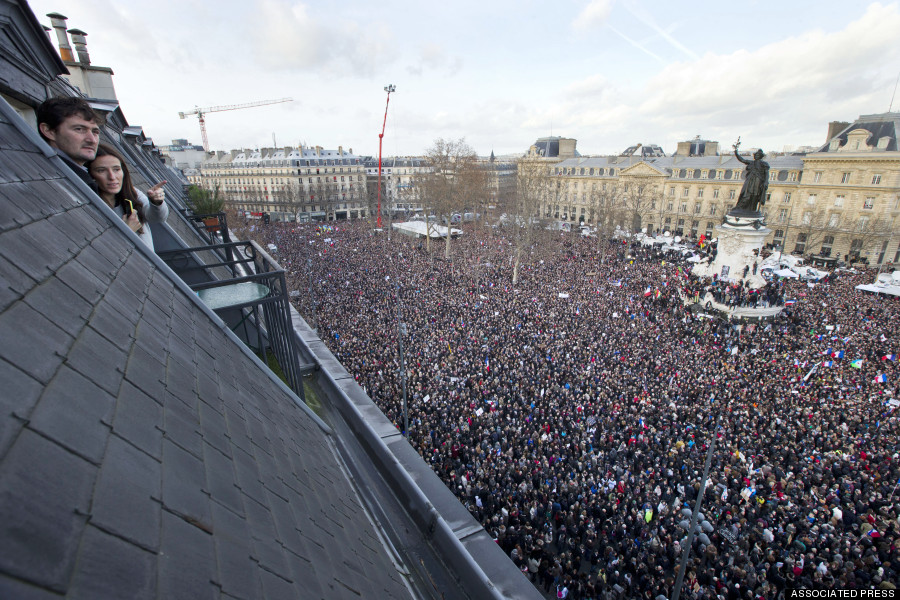 People watch from their roof-top apartment as some thousands of people gather at Republique square in Paris on Sunday. (AP Photo/Peter Dejong) 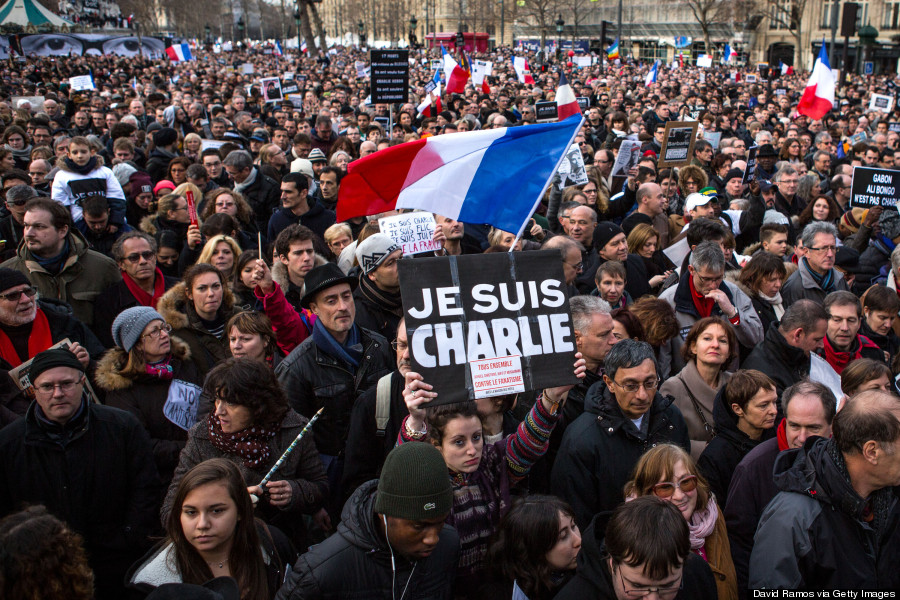 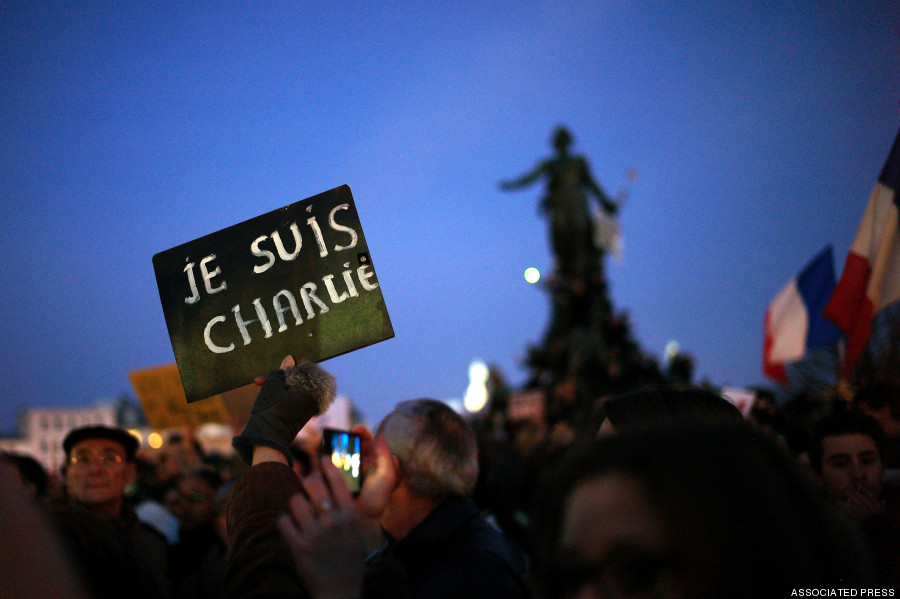 A demonstrator holds a sign reading "I am Charlie" at Place de la Nation during a rally in Paris, Sunday, Jan. 11, 2015. (AP Photo/Thibault Camus)

CORRECTION: A caption identified Angela Merkel as the German Vice-Chancellor. This article has been updated to reflect that Merkel is Germany's Chancellor.