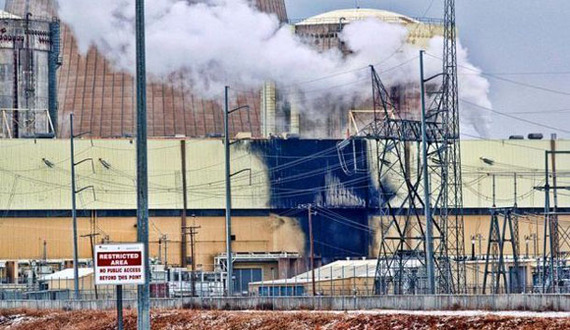 A fire started in Arkansas Nuclear One's electrical switchyard last December after a transformer exploded. It took an hour and a half to bring it under control.

Last week marked the 10th anniversary of a federal reactor fire safety standard, but it's doubtful anyone at the U.S. Nuclear Regulatory Commission (NRC) broke out the Champagne. That's because 35 reactors -- more than a third of the U.S. fleet -- still don't fully comply with it.

That's not a trivial matter. The NRC itself estimates that fire represents as big a risk for a reactor meltdown as all other potential threats combined, and since 1995 there were more than 150 nuclear plant fires. Regardless, instead of issuing violation notices or shutting down plants until they comply, the agency has spent the last three decades granting extension after extension, and pushed the final deadline for compliance to 2018.

If past is prologue, that cutoff date will likely slip, too. In the meantime, the agency's lax enforcement threatens the safety of tens of millions of Americans who live within 50 miles of a noncompliant reactor.

The NRC established its 2004 fire standard as an alternative to one that dates back to 1980. Like the earlier standard, the 2004 version is supposed to ensure a fire can't destroy a reactor's primary and backup emergency safety systems. Owners have the option of complying with either standard.

The 1980 standard was prompted by a catastrophic fire at the Browns Ferry plant in Alabama in March 1975. A worker, trying to locate an air leak with a lit candle, succeeded all too well. He found the leak, but a rush of air flared the candle, igniting the polyurethane foam seal that insulated electrical cables in the wall.

The fire, which burned for nearly seven hours, torched some 1,600 electrical cables and disabled the Unit 1 reactor's emergency core cooling systems and most of Unit 2's. If not for a heroic effort by workers to jury-rig ways to pump water into the reactor containments, both units would have melted down.

The standard the NRC adopted after the Browns Ferry fire required plant owners to separate primary electrical system cables and emergency backup cables by at least 20 feet. If that proved impossible, plant owners could place them at least 10 feet apart and install fire barriers or suppression systems, such as sprinklers and carbon dioxide dischargers. And if the plant's design necessitated placing the two cable systems next to each other, the standard called for owners to install the barriers and suppression systems and wrap them in fire retardant material.

Beginning in the early 1990s, studies revealed that some types of material used for electric cable insulation, called fire wraps, did not meet the 1980 standard's requirement to withstand a fire lasting as long as three hours. To compensate, many plant owners began to use measures -- particularly what the industry calls "manual actions" -- that the NRC had not approved or authorized. For example, if a fire damaged primary and backup system cables, the plant would dispatch workers to manually turn on pumps, close valves, or take whatever steps necessary to control the situation. NRC regulations permit manual actions, but only when they have been formally reviewed and approved on a case-by-case basis.

In 2000, NRC fire inspectors discovered that plant operators were routinely using unapproved manual actions, making it difficult, if not impossible, for the agency to determine whether the plants were operating safely. The agency then began to crack down on the practice, but plant owners threatened to submit hundreds, if not thousands, of exemption requests, which would have buried the agency in paperwork.

To avoid bureaucratic gridlock, the NRC established a new standard in 2004 that gave plant owners the option of managing fire hazards through computer modeling. Developed by the National Fire Protection Association, the revised standard, called the NFPA 805 regulation, "seeks the same outcome as the 1980 standard," explained Dave Lochbaum, director of the Nuclear Safety Project at the Union of Concerned Scientists (UCS). "But it allows a plant to do it by calculating fire timing. How long will it take to put out a fire? How long can cables last in a fire? How long would it take for a fire department to get to the site?"

A 2012 GAO investigation concluded this seat-of-the pants freelancing could compromise plant safety. According to the report,

... some plant operators had used temporary measures that that they could take without prior approval to compensate for equipment that needs to be repaired or replaced (compensatory measures) for an extended period of time rather than conducting needed maintenance, a practice that could degrade nuclear fire safety. For example, some plants had adopted fire watches, in which teams of plant employees are either posted continuously in a single location in a plant or rove throughout the plant to detect signs of fires. We reported that, at one nuclear power plant we visited, plant operators used fire watches for more than five years instead of replacing faulty seals to cover openings in structural barriers.

Perhaps more important, the GAO found that the NRC does not maintain a centralized database to track manual actions, so there is no way for the agency to assess the extent of the practice or the risks it might pose.

"The NRC has been backed into a corner on this issue," said David Wright, a senior scientist at UCS and co-director of the organization's Global Security Program. "The agency has allowed plants to use unapproved manual actions because it doesn't have the resources to approve them all, but it shouldn't pretend that it understands in detail what the risks are and it can guarantee plant safety. It has let things go on too long already, and needs to strictly hold plants to their schedules to comply with the fire standards."

While the NRC Dawdles, the Public is at Risk

Instead of holding plants to tight schedules, however, the NRC's glacial pace of resolving fire safety problems is slowing down.

To try to expedite matters, for example, the NRC picked two plants as pilot projects to work out the kinks and bugs of adopting the NFPA 805 regulations: the Shearon Harris plant in North Carolina and the Oconee plant in South Carolina. In both cases, it took less than six years from the time the owners told the NRC they intended to transition to the new standard to when the agency formally approved the plans. Note that didn't include the time it would take for actual implementation.

Given pilot projects are typically where problems are identified and resolved, one would expect that, based on lessons learned, subsequent NFPA transitions would take less time. In fact, the opposite is true. The Diablo Canyon plant in California, for instance, informed the NRC it would adopt the new fire standard more than eight years ago, but the agency has yet to approve its transition plan.

The NRC's scorecard today? There are currently 100 operating reactors. Owners of 46 of those reactors notified the NRC they plan to comply with the 2004 fire standard in lieu of the 1980 standard. To date, however, only 11 of the 46 reactors have completed all the required steps to achieve compliance, according to the NRC. In the meantime, plant operators are still relying on manual actions to manage fire risk.

Lochbaum says the NRC's inability to expeditiously enforce its fire regulations is inexcusable.

"By tolerating the intolerable, the NRC is letting the public down and literally gambling with their lives," he said in testimony before Congress in mid-June. "If a fire destroyed one of the out-of-compliance nuclear reactors, would the NRC have a good answer to the question: 'Why did you allow the reactor to operate so long despite the known risk?' I can't think of a good honest answer."