Polls find greater skepticism of mandatory vaccines among younger Americans. Clinton and Bush are running even in Florida. And Gallup is doing more online research, but the Gallup Daily will remain a telephone poll. This HuffPollster for Tuesday, February 3, 2015.

MILLENNIALS LESS SUPPORTIVE OF MANDATORY VACCINATION - Monica Anderson: "A Pew Research Center report released last week shows that a majority of Americans say children should be required to get vaccinated. Further analysis of the survey data reveals significant age differences in views about vaccines. In 2009, by contrast, opinions about vaccines were roughly the same across age groups. Also, some modest partisan divisions have emerged since 2009, when Pew Research last polled on the issue. Overall, 68% of U.S. adults say childhood vaccinations should be required, while 30% say parents should be able to decide. Among all age groups, young adults are more likely to say vaccinating children should be a parental choice. Some 41% of 18- to 29-year-olds say parents should be able to decide whether or not their child gets vaccinated; only 20% of adults 65 or older echo this opinion. Older Americans are strong supporters of requiring childhood vaccinations – 79% say they hold that view, compared with 59% of those under 30." [Pew]

Another poll finds similar result -Peter Moore: "YouGov's latest research shows that most Americans (57%) support requiring all children to get vaccinated against childhood diseases, but 32% do think that it should be up to parents to decide whether or not their child should be vaccinated. Americans under the age of 30 (43%) are far more likely than other age groups to say that the decision should be left to parents. Only 26% of 45-64 year olds and 21% of over-65s think that vaccination should be at parental discretion...Younger Americans are not only more likely to oppose mandatory vaccination, but are also more likely to say that vaccines can cause autism. 21% of under-30s say that they can cause autism, compared to only 3% of over-65s."
[YouGov]

Vaccination becomes politically polarizing - Brendan Nyhan: "The social and political conflicts we’ve seen emerge over the outbreak threaten to polarize the issue along political lines and weaken the social consensus in favor of vaccination... Moreover, the outbreak has fueled a backlash against the anti-vaccine movement that is likely to be counterproductive. Dr. James Cherry, an infectious disease specialist at U.C.L.A., for instance, labeled parents of unvaccinated children 'selfish' and 'dumb,' while a Los Angeles Times columnist, Michael Hiltzik, called for treating 'the anti-vaccination crowd' as 'public enemies.' If we’ve learned anything in politics over the last few decades, it’s that this kind of language is likely to be polarizing, driving people away rather than persuading them. What’s even more dangerous is politicizing the debate over vaccines. Comments by Gov. Chris Christie of New Jersey calling for 'balance' in the vaccine debate after President Obama said Americans should 'get your kids vaccinated' could have a similarly perverse effect, turning a public health issue into a matter of partisan allegiance." [NYT]

CLINTON LEADS BUSH IN OH & PA, EVEN IN FL - Quinnipiac University: "A first look at three critical swing states, Florida, Ohio and Pennsylvania, for the 2016 presidential election is good news for former Secretary of State Hillary Clinton, who tops possible Republican contenders in every matchup, except Florida, where she ties former Gov. Jeb Bush, and Ohio, where she ties Gov. John Kasich, according to a Quinnipiac University Swing State Poll released today. Overall, Gov. Bush runs best of any Republican listed against Clinton." [Quinnipiac]

GALLUP REDUCING PHONE INTERVIEWERS - Matt Olberding: "Gallup, which for decades has been synonymous with the phone interview, will be doing a lot less of it. The company, which was based in Lincoln from 1988 to 2003, is reducing its call center staff in both Lincoln and Omaha. Johnathan Tozer, Gallup's global communications director based in Washington D.C., said the company is reducing phone data collection, where applicable, 'which is part of Gallup’s long-term migration plan toward online data collection in addition to our sophisticated analytics and consulting.' Tozer said the change will involve no layoffs, and all reductions will be achieved through either attrition or transfers or promotions within the Omaha and Lincoln offices. He did not quantify the scope of the changes." [Lincoln Journal Star via @LoveStats]

Change will not affect Gallup Daily - Gallup Poll Editor-in-Chief Frank Newport, responding via email: "The Gallup Daily tracking surveys, monthly Gallup Poll Social Series surveys, and other Gallup poll related research **will continue to be conducted using RDD phone surveys.** As Johnathan indicated in the article, we are continually conducting research and evaluating the effectiveness of all of our research methods. At this point, RDD phone surveys continue to be the best method for scientifically generalizing from a sample to the national adult population."

Apropos of something... - To access the Journal Star report on the changes at Gallup, readers who do not subscribe to the newspaper had to answer a question for the Google Consumer Surveys. Google has pitched their service to news organizations as a way to "monetize your website's content." [Google] 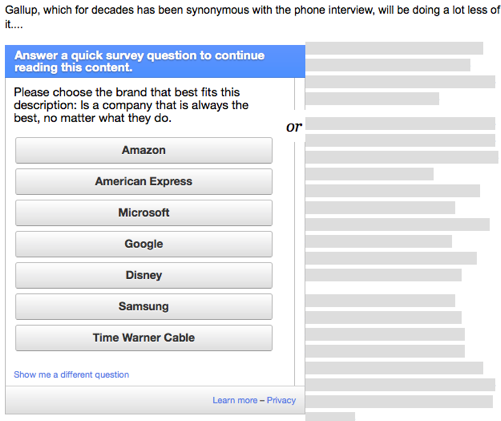 ACADEMICS DIVERGE WITH PUBLIC ON IMMIGRATION BUT AGREE ON WALL STREET - HuffPollster: "Fifty-three percent of academics who specialize in international affairs said they believe that the U.S. should increase immigration, while 27 percent believe it's best to keep it at the present level and 6 percent called for decreasing it…In contrast...[O]nly 22 percent [of Americans] support an increase in immigration, while 33 percent would keep it at the present level and 41 percent would decrease it... The poll also found that academics diverge with national public opinion on defense issues…[W]hile just 38 percent of scholars think the nation is headed back into a Cold War against Russia, fully half of Americans said the same in a poll taken last March...Academics, like much of the public, had mixed opinions on the campaign against the Islamic State...One place scholars and the broader public agree? Wall Street. Forty-eight percent of scholars in the poll said they thought the global regulatory infrastructure system is neither more nor less capable than it was in 2008…[Twenty four] percent of people expressed no confidence in the federal government's ability to regulate financial institutions, while 34 percent expressed 'not much' confidence."[HuffPost]

TUESDAY'S' OUTLIERS' - Links to the best of news at the intersection of polling, politics and political data:

-Gallup breaks out presidential approval by state for 2014. [Gallup]