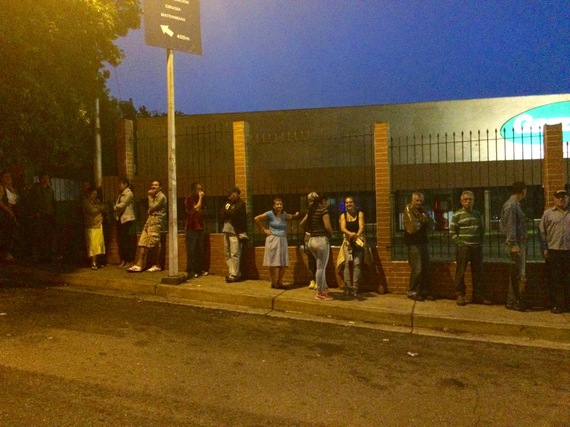 Venezuela is going through one of the worst economic crisis it has faced in decades. With oil prices at an all-time low, the country is largely unable to pay for and import essential food items or medicines and while the government denies there is a problem and refuses to ask for international aid, people are struggling to make ends meet in the midst of rising malnutrition and a healthcare crisis.

In one of the countries with the largest oil reserves in the world, shopping for food can be a daunting, almost impossible, task.

It's Tuesday afternoon in Guarenas, a small city some 30-minutes by car from central Caracas, Venezuela's capital.

Esperanza, a 59-year-old grandmother, stands in line patiently with an expression that combines hope and desperation on her face. The relentless heat does not seem to deter her. She arrived at the supermarket long before dawn to ensure she could buy something to feed her family. A couple of dozen people stand in front of her. Confusion reigns -- no one knows what the supermarket will offer today, or if they will be able to buy anything at all.

In some areas of the country this uncertainty and desperation has turned into protests and looting.

Today is one of the two days this week Esperanza is allowed to shop for food and other essentials at regulated prices. People in Venezuela are only allowed to shop twice a week as part of the food distribution strategy imposed by the authorities intended to mitigate the growing crisis.

The oil-dependent country is experiencing extreme food shortages since the price of petrol plummeted three years ago, leaving Venezuela with little cash to continue to import basic food products and medicines.

"This is the second queue I'm doing today. The other shop had run out of products quickly so they told people to go. I don't know what they will be selling here but I will stay, no matter what," says Esperanza, whose name means 'hope' in Spanish.

"Little Hope" Esperanza lives with her son, his wife and their two young children - her grandchildren. They all survive on two monthly salaries of between US$30 and US$40 a month (according to the average exchange rate).

Under the same exchange rate, a kilogram of flour is sold in non-regulated markets at around US$2.50, a litre of milk nearly US$2 USD and a kilo of pasta at US$3.50. Feeding three adults and two children within the family-budget is an increasingly difficult task.

Even if you're prepared to pay higher prices, essential food items are scarce. Other basic items such as sugar, hygiene products and medicines are almost impossible to find these days. Esperanza's job is to fetch enough food to keep the family going, and the strain is starting to take its toll.

"I have not eaten anything since yesterday and if I can't buy something today I will go to bed without having had dinner once again. I will have to put my grandkids to bed early so they don't ask me for food," she said, tears running down her face.

The situation worsens the further you travel away from Caracas - where hunger is quickly turning into violence.

Over the past few weeks, media outlets across Venezuela have reported increasing demonstrations and incidents of looting -- a reaction to a crisis that is reaching catastrophic proportions. Security forces are reported to have used excessive force leaving nearly a dozen dead and many others injured. In the city of San Cristobal, in the state of Táchira, on the border with Colombia, tensions are running high. 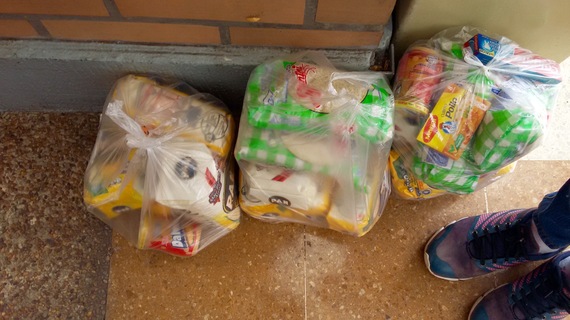 "I have some flour and pasta at home but if I can't buy any oil today I do not know what I will cook," said an elderly woman. She has been standing in line for five hours.

Around her, a few dozen people shout angrily at the man who is trying to organize the queue in the main state-owned supermarket in town. They say they have been waiting for hours and complain there is no system to ensure everybody can go home with something to feed their children. The shop's doors are guarded by a dozen police officers in riot gear. They are protected by heavily armed members of the National Guard.

Most of those in the queue are likely to go back home empty handed or, at the most, with a packet of flour and a little cooking oil - the basis for arepas, a type of pancake that has become one of the the main sources of affordable nutrition for millions across the country. Those less fortunate will go back to their families with nothing but a mango or a few potatoes.

"I cannot even remember the last time I ate chicken, meat, tuna or milk," said another woman.

"We are used to skipping breakfast but now if you only get to eat once a day, you are lucky," she complained.

"Humiliating" The availability of what are considered 'essential goods' by the Venezuelan authorities has plummeted in recent months. Shopping for diapers, baby formula, and deodorant - now relegated as 'non-essential' - has become a near impossible task.

"It's humiliating," said a young mother holding a two-month-old baby as she waited by the aisles of a private supermarket after a neighbor tipped her off that they were going to 'release"' diapers and formula at regulated prices.

"I managed to buy some formula and diapers a few weeks ago but nothing since. What am I supposed to do? It is very frustrating to hear the government saying everything is fine."

Shopping for food is heavily bureaucratized. People have to show their ID or fingerprint to shop and the food allowance is personal and not transferable. Older people and those unable to manage the hours-long queues cannot send anyone else to do it for them.

"What am I going to eat this week?" asked Carmen, an 80-year-old woman. "Plantain mash, what I have been eating for weeks. I do not know how much longer I can go on like this." 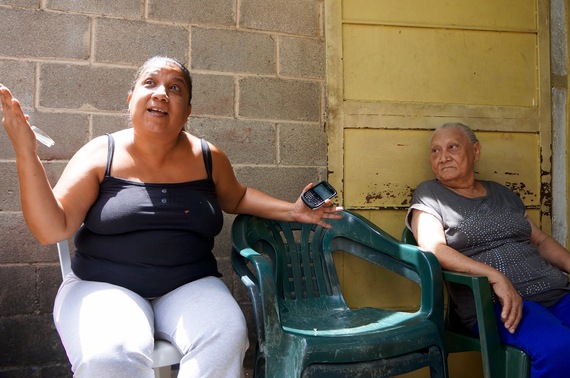 A government in denial The government of President Nicolas Maduro, Hugo Chavez's successor, has so far denied there's a humanitarian crisis and consistently rejected calls to ask for international aid including vetoing attempts to bring in vital medical supplies.

Human rights organizations such as Amnesty International have argued that the authorities must urgently request humanitarian aid in the form of food and medicine.

"Failing to acknowledge and tackle the utter urgency of the crisis in Venezuela will only turn a very dramatic situation into an unthinkable nightmare," said Erika Guevara Rosas, Americas Director at Amnesty International.

Esperanza's frustration shows. She looks at the supermarket's door, several metres away from her, tears still running down her face.

"We are just asking for food, nothing more," she said.