Torn between playing with his young kids in France and playing chess in Norway, Vladimir Kramnik, 38, made a choice that paid off. The former world champion won the 2013 FIDE Chess World Cup in Tromsø and collected $96,000. 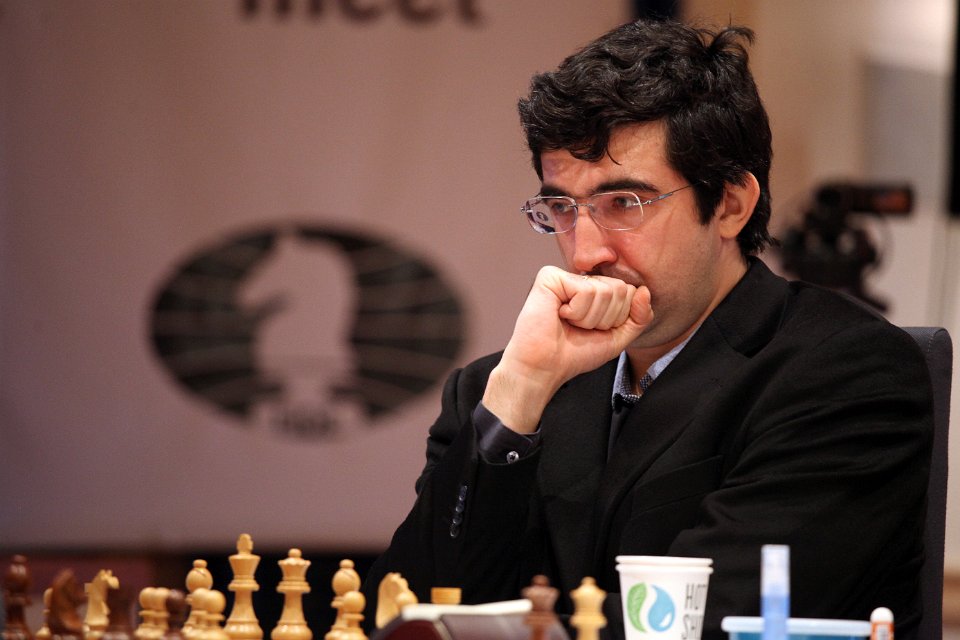 The grueling 128-player knockout was also a qualifier for two places in the 2014 Candidates tournament. Kramnik and Levon Aronian of Armenia already qualified by rating, but they had to show up in Tromsø. Kramnik finished the event undefeated, winning all seven matches. He booked five wins in the classical tempo and four wins in rapid chess.

I believe the idea of the FIDE knockouts started at the 1985 Interzonal in Biel. I had a conversation with the film director Milos Forman (One Flew Over the Cuckoo's Nest, Amadeus) about the 1984-85 world championship match Karpov-Kasparov and how it was abruptly ended by Florencio Campomanes. Suddenly, out of nowhere, the FIDE president showed up and joined us.

"Why don't you organize the world chess championship like Wimbledon?" Forman asked him. "A knockout tournament with 128 players and the champion starts like everybody else - in the first round. And you can do it every year." The FIDE president mounted a strong defense in support of the world champion and the traditional match system. It would have impressed even Garry Kasparov, but it didn't sound convincing to Forman. "I will think about it," Campo finally said.

It was a long thought, but in 1998 FIDE organized the first world championship knockout. Campomanes still had an influential voice in FIDE, but was no longer the president. The current world champion Vishy Anand is the only player who won the FIDE knockout twice (1998 and 2000), although in 1998 FIDE appended to his victory a short world championship match against the well-rested Anatoly Karpov. FIDE delivered Anand to Karpov on a platter or, as Anand put it, "in a coffin." The Indian grandmaster succumbed in the tiebreaks. In 2005 FIDE switched the knockout from the world championship to the World Cup.

One can assume that the knockout is made for the young players full of energy, but surprisingly the last four World Cup winners were mature players. In 2007 Gata Kamsky was 34, in 2011 Peter Svidler was 35 and in 2009 Boris Gelfand was 41. "I don't feel tired," Kramnik said after his 2.5-1.5 victory against the Russian compatriot Dmitry Andreikin in the final match.

"I am not ashamed of my play here," Kramnik summed up his performance. "Pretty good chess, no blunders." Except for one small glitch in the 125-move draw against the Frenchman Maxime Vachier-Lagrave. 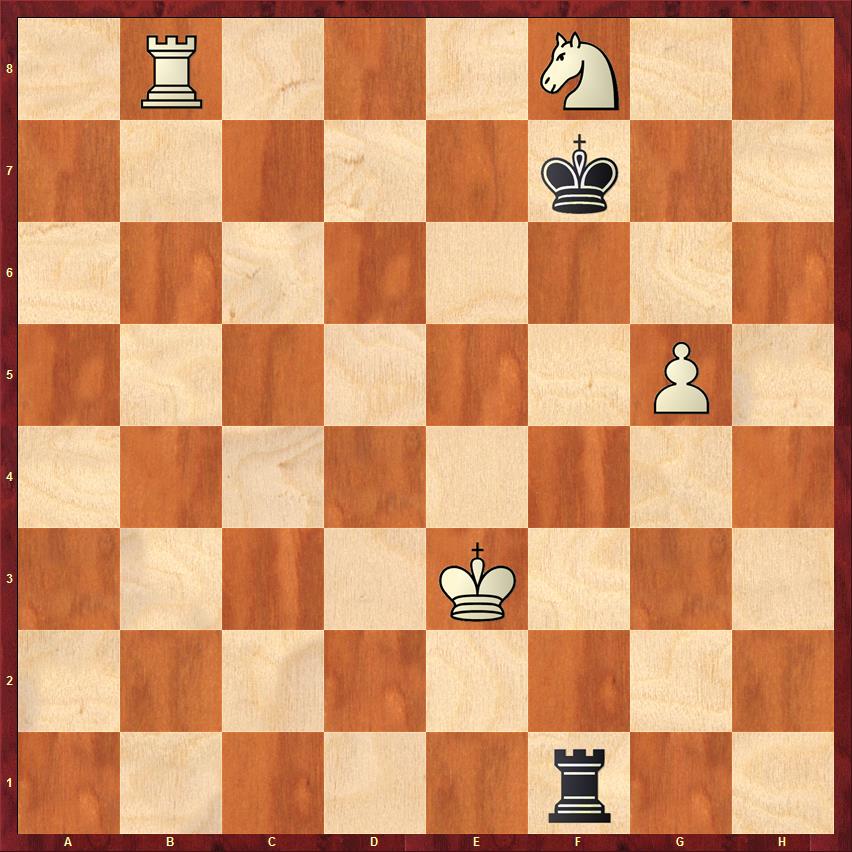 In this position white wins by force, but he has to see the punchline on move 65. The computers saw it, but even some commentators were at a loss.

The point! The counterpunch helps white to protect the g-pawn.

Kramnik's play was solid and impressive throughout the event. His deep opening knowledge is legendary and lethal. Garry Kasparov decided to give up the Grunfeld defense after Kramnik frustrated him with different lines of the Exchange variation. After the King's Indian it was the second defense Kramnik eliminated from Kasparov's repertoire. In Tromso, the Ukraninian GM Alexander Areschenko, 27, got caught in Kramnik's Grunfeld web and paid the price. 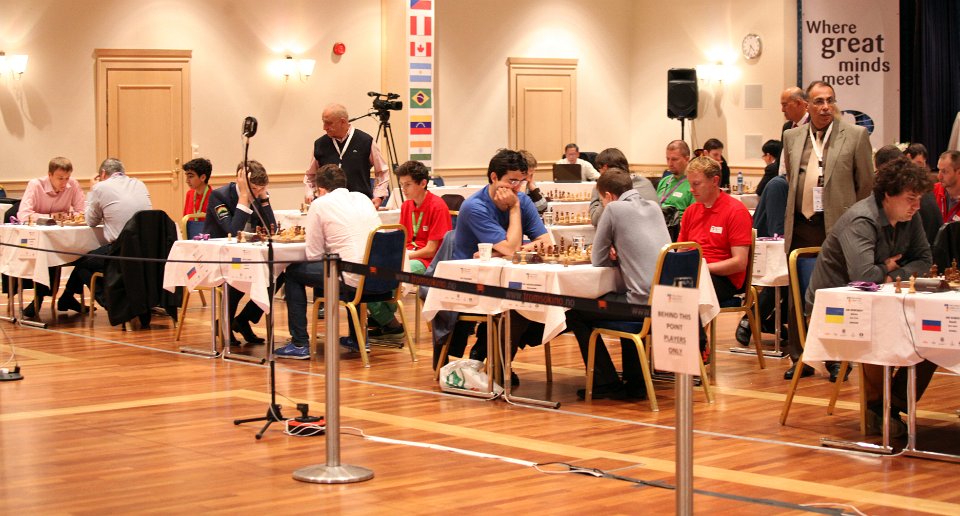 This line almost forces the queen exchange. The queenless middle game can be still dangerous for black.

A flexible choice, giving white the possibilitity to castle short.

The current fashion. After the previously popular 12...Bg4 white usually ends up playing an endgame with a bishop pair. And Kramnik likes that. 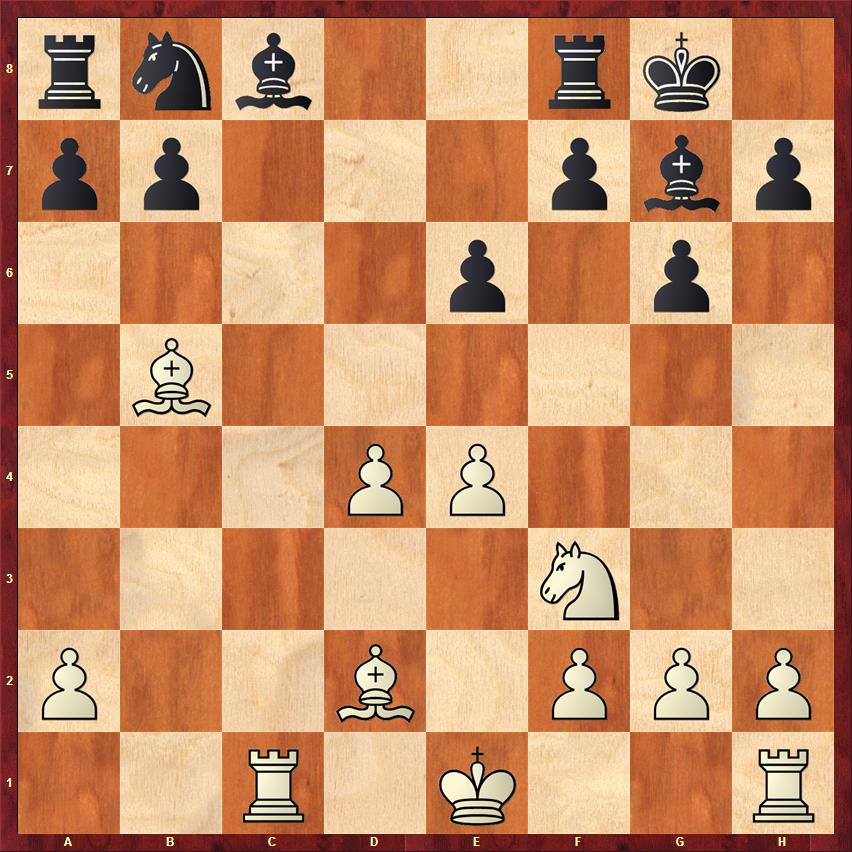 An annoying move, preventing smooth development. Kramnik is also playing the percentages. The bishop move has over 70 percent rate of success. Areshchenko was probably expecting the more modest 13.Bc4, played by Kramnik against Fabiano Caruana in Dortmund, Germany, just before the World Cup. Kramnik won in 76 moves, but not because of his opening play.

A novelty, recommended by a few computer engines.

Preventing 17...c5 and creating a hiding place for his king on f2. This is a new concept. White doesn't take the pawn on c6. 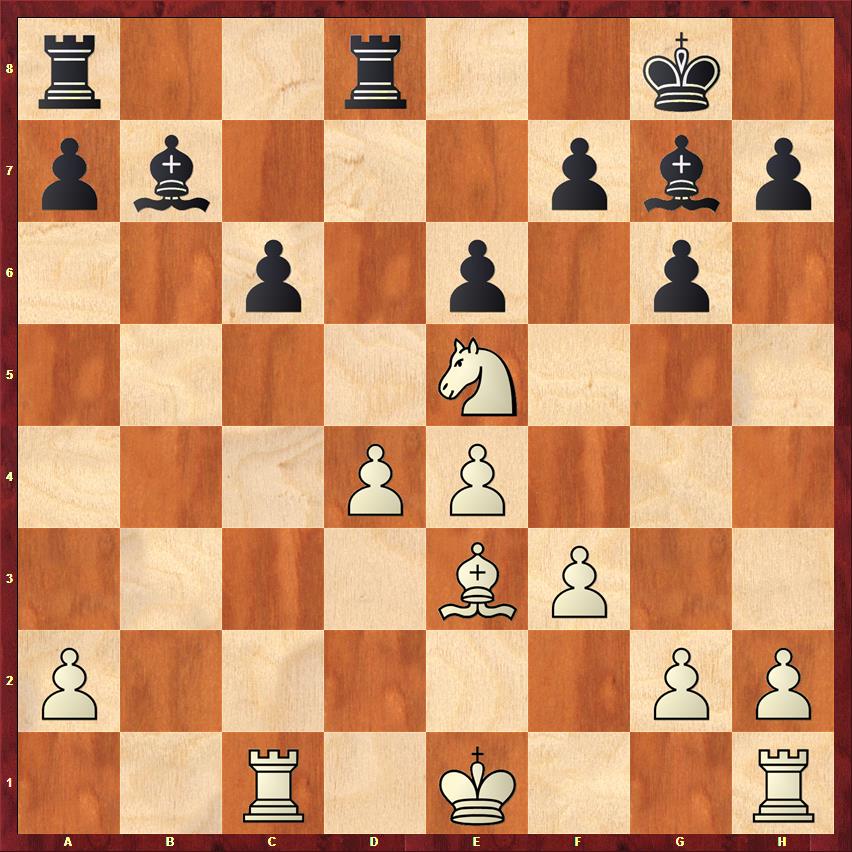 The bishops of opposite colors do not guarantee equality. Black's position has too many holes. 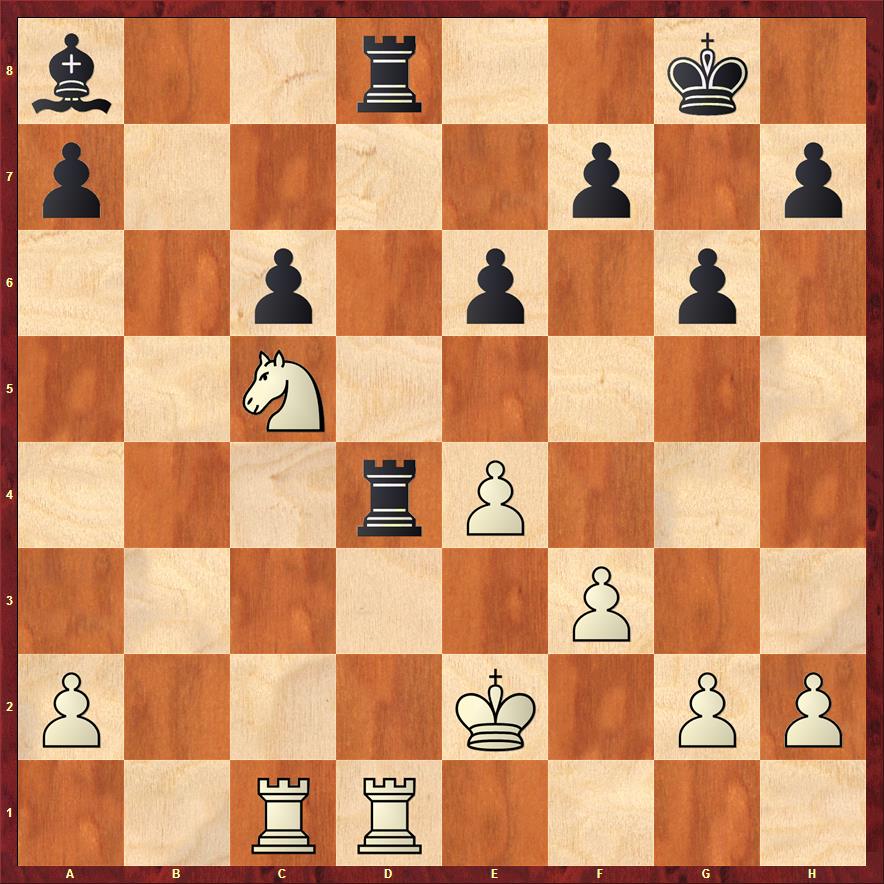 The extra c-pawn buries the bad bishop and brings more suffering than joy. Aaron Nimzowitsch, the author of My System and The Blockade, would have been delighted to have this position with the white pieces. 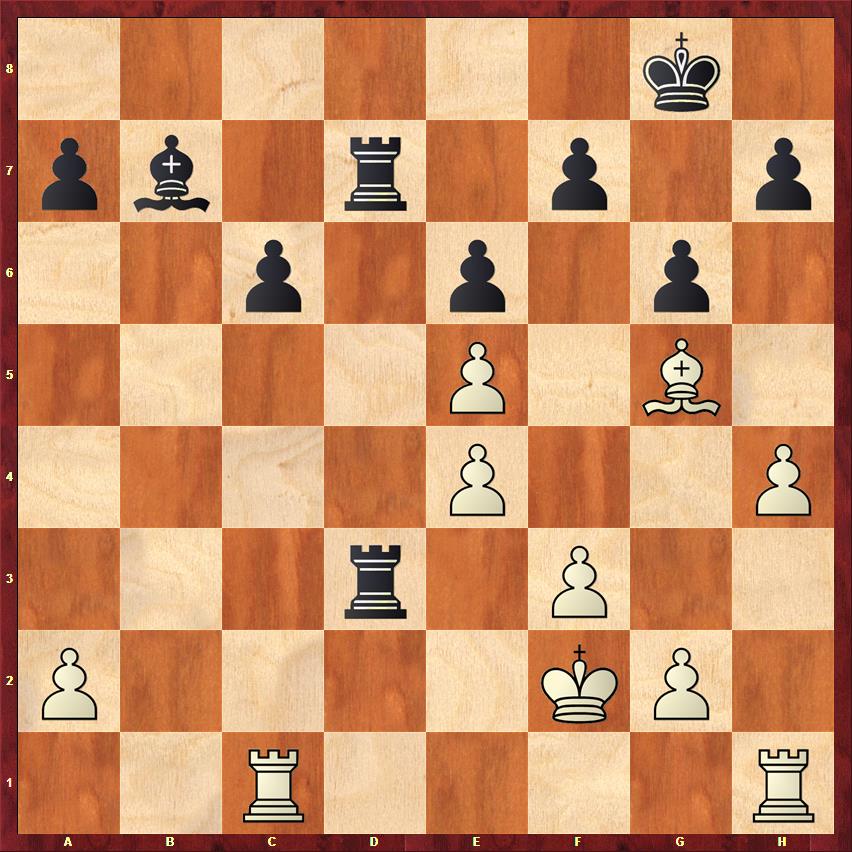 Kramnik's favorite advance in the Grunfeld, trying to open the h-file. He played it in many forms and shapes.

The exchange of pawns allows the white rook to enter the eighth rank, creating mating threats.

Black has to do something against the threat 27.Bf6.

Kramnik has a strong advanced passed pawn and black king is still unsafe. No doubt white can force a win. 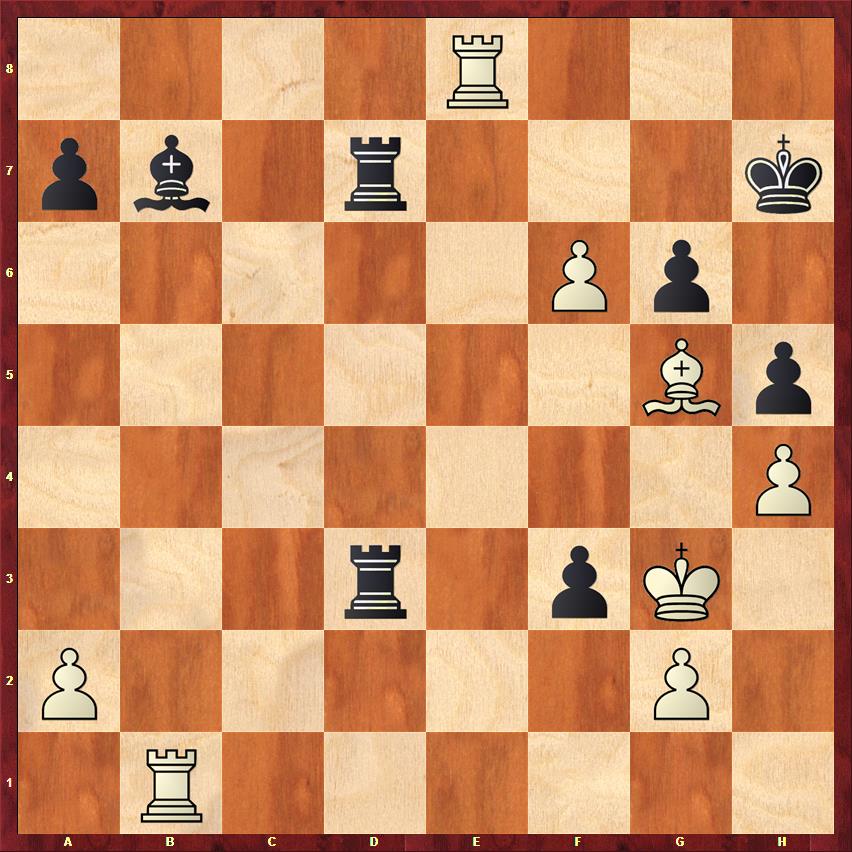