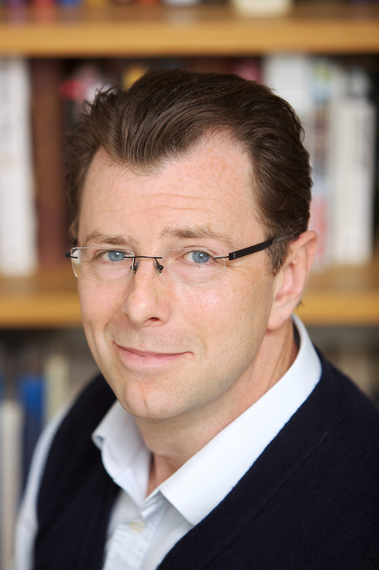 Conn Iggulden is internationally known for his historical fiction. He's written the Emperor series about the life of Julius Caesar, and the Conqueror series, based on the lives of Mongol warlords. He's also written a series of children's books called The Dangerous Book for Boys.

Now, he's begun the Wars of the Roses series with the first of three books, Stormbird. This series focuses on the betrayals and machinations behind the story of the two royal families who plunged England into one of the most bloody and brutal periods of British history.

Give us an idea of what the Wars of the Roses was about.
It's a story describing what took place between 1450 and 1495 and how the Tudors came to the throne of England. It involved the struggle between the Houses of Lancaster and York, with Lancaster on the throne at the beginning and York at the end. Distilling it all down to one element, it was the psychological weakness of one King, Henry VI, that led to the throne of England changing hands.

What has drawn you so magnetically to historical fiction?
Historical fiction, more than any other genre, has power and makes an impact, because it's based on true stories. My mother was a history teacher. Since, I'm only 43, my father seems ancient. He lived through a great deal of history. I was brought up with stories about real people of courage in antiquity. In my father's case, they were stories from World War II, which he vividly remembers. The key was that they were true stories. That's the absolute essence of historical fiction. I know pure fiction can reach extraordinary levels of tension, but historical fiction has tension and conflict already built in. If you're reading about Julius Caesar as a young man, there's a moment when you're struck by the fact that these events really happened. It's been a joy to be able to tap into the magic of historical fiction.

In a way, I'm quite lucky. Both my parents were quite old when they had me--particularly on my father's side. His father was born in 1850 and had my father when he was 73 years old. So, in just two generations, I had a sweeping sense of history going very far back. My father told Victorian stories he learned from his father. I was immersed in history from the beginning of my life.

I know you've read George R. R. Martin's cycle of novels, Game of Thrones. What similarities exist between that series of novels and Wars of the Roses: Stormbird?
I started following Julius Caesar, and then, Genghis Khan. They were birth-to-death stories. I read George R.R. Martin's books which were more like an ensemble piece involving families struggling against each other. That's the big similarity. Wars of the Roses covers the House of Lancaster, the House of York and other key players like the Woodville and the Neville families. The series is more of a joint ensemble piece such as Game of Thrones, rather than following a single life from beginning to end.

What kind of research do you do?
It depends on the novel. For Genghis Khan, I had to go to Mongolia. I didn't know the colors, the birds and animals I might come across. I spent time there, developing very unpleasant saddle sores. But The Wars of the Roses was much easier because the first battle took place only five miles from my house. And the British Library was a valuable source. Because it's English history and I live there, I was able to do the research comfortably, at home. But I worried because the novel takes place in England and everyone would know if there was an historical or descriptive inaccuracy in my writing. I would look like a complete fool if I made such a mistake and it's extra tension--really, a responsibility--to get the details and facts right.

How long before you actually start writing the novel?
I begin reading for my next subject while I'm in the middle of an ongoing series. It could be a year or 18 months of reading. With any luck, I find a subject. Sometimes it's difficult. I rejected King Arthur because of the so-called magic involved. I rejected doing one about Al Capone because it would be another novel about an alpha male. I also rejected doing a series about Attila the Hun.

I try to find stories and characters that have impressive moments in history, such as when Julius Caesar met Cleopatra for the first time. I could actually see and understand how this beautiful young woman would affect him, and how the story would work. It might take 18 months before I'm even ready to start writing notes.

You mentioned an alpha male. Your previous novels have focused on powerful men. In Wars of the Roses, a woman plays an integral part in the story. Did that influence your choice of topic?
In some ways, yes, because it was an interesting challenge. It's partly because while she was married to an English king, Henry V was almost a non-entity. He was something of a passive vacuum, so Margaret of Anjou--who arrived from France to marry him--thrived in Henry's personality vacuum. She protected her husband, and eventually, protected her son, as well. The story had elements reminiscent of Shakespearean tragedy.

Your novels contain dialogue between people long dead. How do you balance historical accuracy with the wish to tell a compelling story?
When you're dealing with the 15th century, you're dealing with Chaucerian English. It wasn't even as clear as Shakespearean English, which itself can give people reason to pause. When writing dialogue, I try to avoid anything that could be considered modern slang. But, if I use Chaucerian spelling, I will lose the reader. It's always a compromise between being too modern and overusing the historically appropriate idiom of the time, which would ring false to the modern reader's ear. But at the same time, I have to tell the story and dialogue is the fastest way to make a scene move. It's the old show, don't tell concept. It's much better than description. But you're right: in the end, I'm telling a story based on truth.

What is it about historical figures like Julius Caesar and Genghis Khan that makes their stories enduringly compelling?
What these men achieved was extraordinary. Caesar's father died at a young age. He himself was on the losing side of a civil war. He was captured and held by pirates for ransom. He shouldn't have been able to achieve such astonishing success. Two thousand years later, the Germans had a leader who they called Kaiser and the Russians had a Czar--both names are based on Caesar's name. Caesar's name came to mean king. If you can be so successful your name is synonymous with king, you've lived quite a life.

Genghis was illiterate and didn't write his own history. It was written by his enemies. He was abandoned and left to die at the age of eleven. And despite that, he went on to rule Mongolia. And his grandson, Kublai Khan was emperor of China. It's a true story of rags to riches. If there's any one theme to my books it's the difference one human being can make on the world stage. With enough drive, ambition talent, and hard work, one person can make a huge difference. I think that's the power of these stories.

Do you have a favorite historical era?
I'm going to say no. I've gone from Rome to ancient Mongolia and then the 15th century in England. First, and most important, I look for a story about people. I don't believe we've really evolved in 2,000 years. We're still very much the same. We might be taller, but we're just as stupid, warlike, and occasionally, just as wonderful. And that pertains throughout history, in every era.

What has been one of the most surprising things you've learned about writing in creating your novels?
There is one crucial thing I've learned: it was the difference between being published and not being published. I was not published for longer than I've been published. I wasn't published for twenty years. The surprising thing I learned, and was instrumental in my getting published was this: previously, I didn't plan books with any efficiency. I loved the creative process so much that I felt constrained if I planned a book. I would just write in a creative haze, as if I was on fire and enjoying every minute of it.

But it was unfocused and my work tended to ramble. In contrast, with the first Julius Caesar books, I planned them in small story arcs which led to the greater arc of the story. I knew the last line of the book before I wrote the first one. Before that, I had never planned a book to that level of detail. The biggest surprise for me was that I had to learn to organize my work, that writing isn't purely a creative fire. I had to learn that writing is a craft, as well as an art. To be published, it's necessary to satisfy an audience, not only my own creative urges.

If you could have dinner with any 5 people, living or dead, who would they be?
I'd have to bring people back from the dead. If I invited Genghis Khan, he might take a dim view, and go completely berserk at the table. I might have to strap him to a chair. I would love to meet Julius Caesar. Winston Churchill may be an obvious one. He took part in one of the last military charges of the British Empire with his sword over the horse's ears, thundering towards the enemy. And he also saw a nuclear bomb go off. I don't know if there's ever been a life lived so publically that traversed such a span of technologies. Marilyn Monroe would have to be there. I'd be so interested in her life; and I know she liked writers. She occasionally wrote poetry, which is not very well known. I would invite my wife's grandmother; she was a wonderfully brassy East End woman of Italian roots and she'd belt you if you said something a bit flippant. I really liked her. She was the matriarch of an extended family.

I heard that something very good may happen with The Dangerous Book for Boys.
Bryan Cranston is thinking of developing it as a television series.

When can we expect the next volume of Wars of the Roses series and what will it be called?
It's called Trinity. It's been written and will be published July of next year. The battles begin. We discover what happens to some of the major characters in Wars of the Roses.

Are you concerned that the story of the Tudors might have limited appeal outside the UK?
I've thought about it, but that wasn't the case with the story of Genghis Khan. Above all, these are all stories of immense struggle. They're stories about families, about people in extraordinarily difficult circumstances. I've gone into history and picked out great stories about real people in conflict. It barely matters in which century or locale they're set, so long as they deal with inner and actual conflict. It's the human condition that counts.

Congratulations on writing an exciting historical thriller that brings England's 15th century to life, as though it's happening right now.