It is forever Christmas at McKonkey's Ferry Inn. The dining room in this lovely tavern, located on the banks of the Delaware River, 42 miles upstream from Philadelphia, is always decorated as it would have been on Christmas night, 1776, when George Washington had his dinner here. 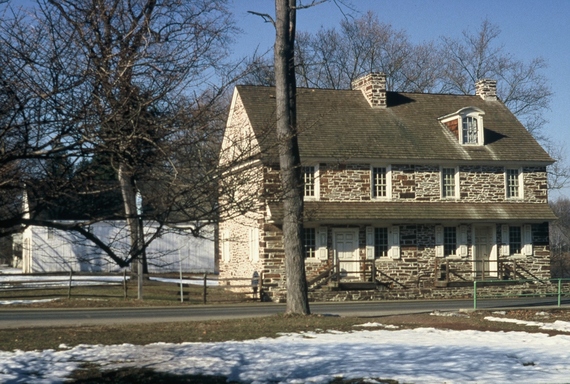 As Washington dined, 2,400 of his men assembled outside along the riverbank. They were a rag tag army, dressed like scarecrows and huddled in blankets against the cold and spitting snow.
Their password for the evening told the story: "Victory or death." This night, Washington was to gamble his army on a desperate stroke - an all or nothing surprise attack on the enemy across the river in Trenton.

What happened in the next 24 hours changed the world. 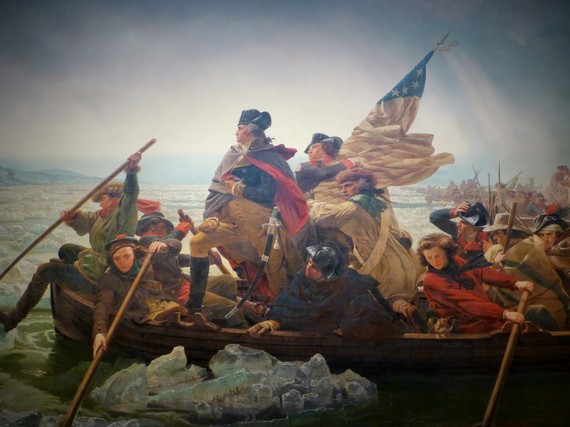 * * *
Today, the setting along the Delaware River is remarkably scenic and little has changed from the fateful night that shook the British Empire and saved a young nation. Many of the historic structures have been preserved. You can see the spot where Washington crossed the river and enter the two ferry houses much like he used as temporary command posts. And on December 25, 2015, you can watch a re-enactment of the actual crossing using replicas of the boats. 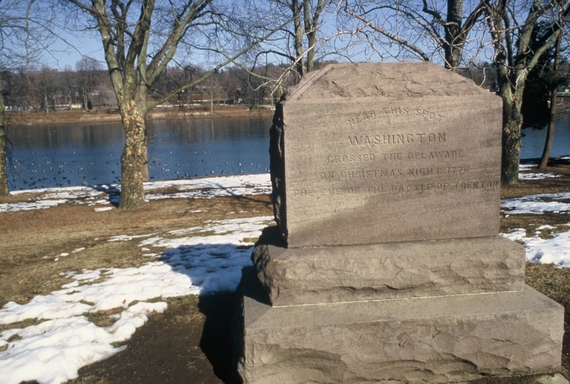 The natural starting point is Pennsylvania's Washington Crossing Historic Park. A short film in the museum sets the stage. The year 1776 began well for the Americans in their struggle for freedom from Great Britain. Washington successfully forced the British from Boston and moved his army of 20,000 men to New York.

But then the Empire struck back. 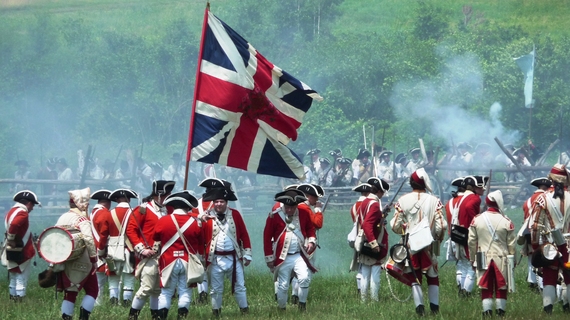 In August, the largest armada the world had ever seen arrived off Long Island with a British army of 30,000 crack troops. They quickly routed Washington's smaller force and drove the rebels south through New Jersey. Marching in the retreat was journalist Thomas Paine, who summed up the situation, writing "These are the times that try men's souls."

When Washington's demoralized army reached the Delaware, he seized all the boats and retreated across, using the river as a temporary buffer. But the end was only a matter of time. Soon the river would freeze and the British could march over the ice. Congress fled from Philadelphia and even Washington confessed, "the game is pretty near up." 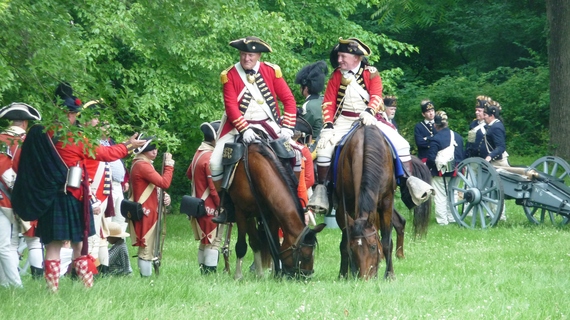 In the museum shop, you can buy replicas of Emanuel Leutze's 1851 painting, Washington Crossing the Delaware on everything from mouse pads to coffee cups. The original 12x21-foot masterpieces hangs in the Metropolitan Museum in New York. The painting's depiction of a stern, determined Washington standing at the prow of a boat, leading an invasion of landing craft into an ice-choked river is an American icon. 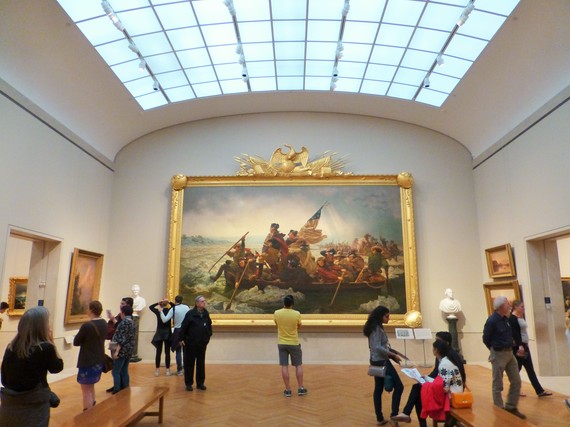 But from a historical standpoint, the masterpiece has several mistakes. Most prominent is that Washington's crossing took place in pitch darkness with the commander probably seated in the back of a boat. For another, the river depicted in the painting is the Rhine. You can see the real river and crossing point just outside the museum.

The only building here at the time was McKonkey's Ferry Inn, and only the basement of the inn is original, the rest being rebuilt in 1790. But today, there is a picturesque village of structures lining a tree-rimmed road. At the Boat House, there are four reproductions of the Durham boats that were used in the crossing. Built to carry iron ore, the pitch black craft were 40 to 60 feet long and looked like long, thick canoes.

Washington's plan was to stop retreating and go on the offensive against a regiment of Hessians stationed across the river in Trenton. The timing was crucial. An aide wrote: "They make a great deal of Christmas in Germany, and no doubt the Hessians will drink a great deal of beer and have a dance. They will be sleepy tomorrow morning. Washington will set the tune for them about daybreak."

The Delaware today is a placid stream with hardly a current, but on Christmas night 1776 it was a hellish scene with swift swirling waters and huge cakes of floating ice. The boats were manned by a regiment of fishermen from Marblehead, Mass., but it took these expert small boat handlers nine hours to ferry the 200 horses, 18 cannons and 2,400 men across the icy current. 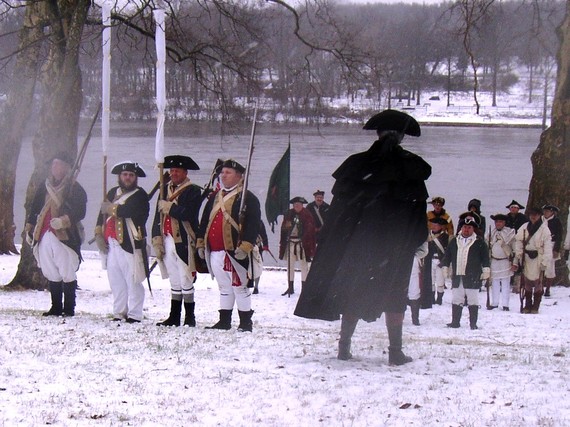 Fortunately, it's much easier to cross the Delaware today. Leave your car on the Pennsylvania side and walk across a narrow 1933 steel bridge to New Jersey. There are pretty views of the river along the way, giving you time to think about the men in the boats below.

As Thomas Paine had written, the "summer solider and sunshine patriot" had long ago deserted. But the men who were left were special. Among the men crossing the Delaware were James Monroe, who would become the fourth U.S. president; Alexander Hamilton, who become the first Secretary of the Treasury; and John Marshall, who would become a Chief Justice of the Supreme Court. 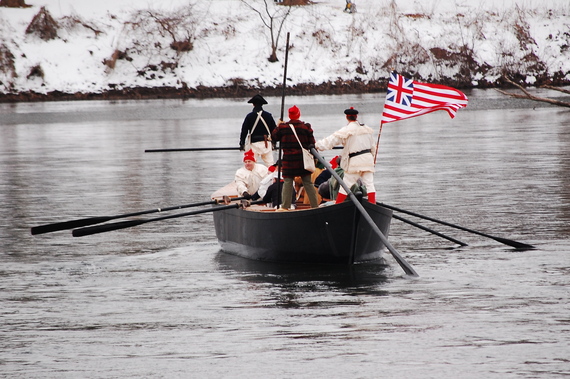 On the other side of the river, you enter New Jersey's Washington Crossing State Park. In 1776, there were dueling ferries here; today there are dueling state parks. Use the pedestrian overpass to walk to the Johnson Ferry House, which Washington's staff used temporarily as a command post.

One of Washington's aides recorded the scene in his diary. "Dec. 26, 3 a.m. I am writing in the ferry house...I (have) never seen Washington so determined as he is now. He stands on the bank of the river, wrapped in his cloak, superintending the landing of his troops....The storm is changing to sleet, and cuts like a knife. The last cannon is being landed, and we are ready to mount our horses." 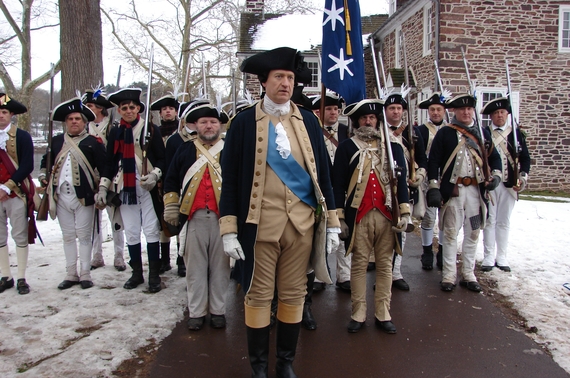 You can follow in their footsteps on a short stretch of the old Continental lane, which today is a shallow grass depression between rows of trees that runs for a quarter mile to the Visitor Center. A Major Wilkinson remembered that the snow "was tinged here and there with blood from the feet of the men who wore broken shoes." 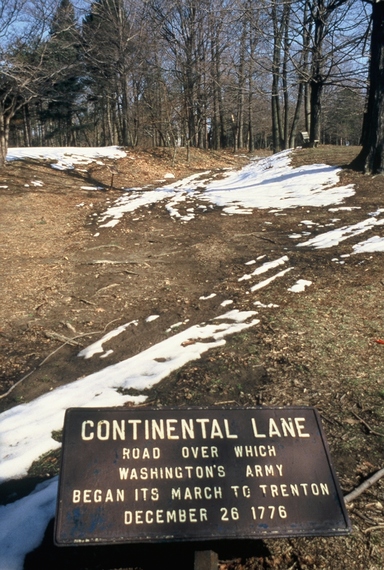 At the Visitor Center, an excellent museum has exhibits, maps, paintings and artifacts that trace the retreat through New Jersey and the coming battle. It's about a half mile walk back to your car in Pennsylvania and then a nine mile drive to Trenton.

The Attack on Trenton

Not much of colonial Trenton has survived. It is a modern, confusing and not particularly attractive city, but the Trenton Battle Monument, marks the spot where the battle began. The 148-foot high column opened in 1893 and has an elevator to an observation deck.

The Hessian commander, Johann Rall, ignored threats of an American attack and stayed up all Christmas night playing cards and drinking. In the gloomy morning, the Americans advanced to the edge of town before the Hessian guard saw them. With cries of "Der Fiend!" -- "the enemy" - the guard tried to alert their men. It was too late.

Washington placed his artillery at the head of Trenton's narrow streets, where they could fire canister -- tins filled with musket balls that exploded from the cannon barrel like a giant shotgun, sweeping everything in their path.

As the dazed Hessians poured out of their barracks, they were cut down by cannon fire. Rall ordered a retreat to an orchard and tried to make a stand, but Washington's men surrounded them. When Rall was mortally wounded, the fight went out of the Germans and they surrendered. 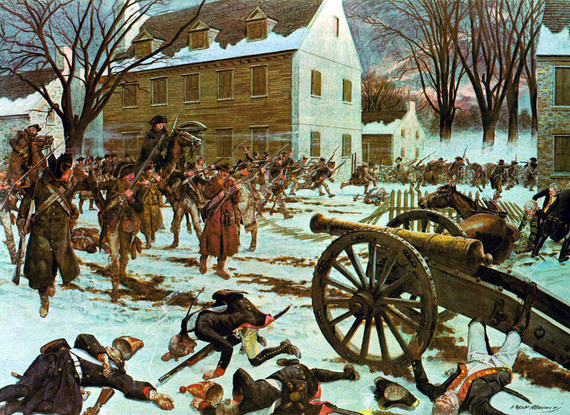 The battle lasted less than an hour. Ninety Hessians were killed or wounded and more than 900 were taken prisoner; the American casualties were two men wounded.

After the fight, an uncharacteristically beaming Washington rode up to Major Wilkinson, grabbed his hand and said, "This is a glorious day for our country."

And it was. From a military standpoint, Trenton was a minor raid. There were still five years of bitter war ahead. But psychologically, it was a turning point. Never again would American spirits or prospects sink so low.

IF YOU GO:
The dramatic crossing is re-created every year on Christmas day. www.washingtoncrossingpark.org/

Best Book: The bestseller 1776 by David McCullough tells the dramatic story of Washington's retreat from New York and the attack on Trenton, Washington's Crossing by David Hackett Fischer is the best book on the event itself.