In the same way culture is manmade, the workplace has been created and shaped by humans with external influence from the environment. It is mind-blowing to look back at the last 75-year journey of how man has developed businesses. Before the industrial revolution, the mass production manufacturing process was nonexistent; there were no modern day factories -- J.D Chambers illustrates this "workshop of the world" from the 1820-1880. In the 19th century we had the transportation and communication revolutions followed by the digital and internet revolution ongoing into the 20th century and overlapping the 21st century.

The future of business keeps being evolved, however it is essential to understand that despite the fact that innovations like the spinning wheel and the internet brought us the gift of better lives, jobs, mobility and a whole list of benefits that were packaged in the workplace, we also inherited the other side of the coin -- more inequality, environmental degradation, injustice, and corruption. The Hard Times by Charles Dickens shows some of the working conditions that resulted in the climax of the industrial revolution development -- yet now we face different and similar wicked problems and we are responsible to keep shaping the future of good business and work environments that are inclusive and fair!

The 21st century is a time to focus on a different type of revolution. David Jones outlined in Who Cares Wins -- "If you are a business leader in today's world of radical transparency, your job is not an easy one." Who Cares Wins urges business leaders to re-evaluate their role in society and warns them that if they do not, they face unprecedented criticism and damage.

I believe the most successful good businesses are those that will be fully engaged in being socially responsible at a time when the world is facing new social dynamics brought upon by the various factors that include a more connected world via the internet, immigration, demographic shifts and the people's active role in holding our leaders accountable to shift bad politics, corruption, inequality and greedy corporates. Businesses and workplaces are not just pillars of policy and corporate jargon -- they are made of people. People are engaged to have better lives in inclusive economies. The future economic growth of nations where good businesses operate should be inclusive across several demographics.

Now is the time for people in business to start caring and taking an active role in the future of better business in the 21st century. There has never been a time so urgent than now to start the good business revolution.

Here are two things our connected world should mean for the future of good business:

The 21st century business must incorporate intercultural intelligence systems. The bolts of mobility are being put to a test. The very fundamentals exemplified by the EU are being jolted by the migrant influx or what others like the Guardian journalist have coined the migrant crisis.[1] The effect is the nibbling effect at the walls of free movement and the defensive approach to protect the developed nations from the "enemy" as quoted by Maximillan in derSpielgel.[2]

Given the actions the EU is taking[3]: despite the fact that this crisis contributed to only 0.1% immigrants vs the population[4], it does highlight that Immigration is a lens which should allow businesses to think through their diversity strategies and learn from the EU "migrant crisis".[5] A call for economic immigration means taking the active role in bridging and integrating more diverse people within a society. It goes beyond investing in language courses which are very important for integration -- it means taking the step to rethink the systems and structures of the business workplace. The harvest of diversity is well known to the businesses yet the first step lies in understanding the current and future demographics of the multicultural environments you will be operating in.

There is a rise in future consumers and workers to watch out for what is called the "3rd culture kids".[6] This generation of multi-cultured people will mean thin lines between keeping businesses local while keeping a competitive edge of an environment that is inclusive and open to diverse cultures.

A call for diversity in the workplace should mean investing in intercultural intelligence. You can't reap the benefits of immigration/migration if you are not aligning the workplace diverse culture IQ to your long term strategies -- As Justin Trudeau Quoted: "Diversity is the engine of invention. It generates creativity that enriches the world" 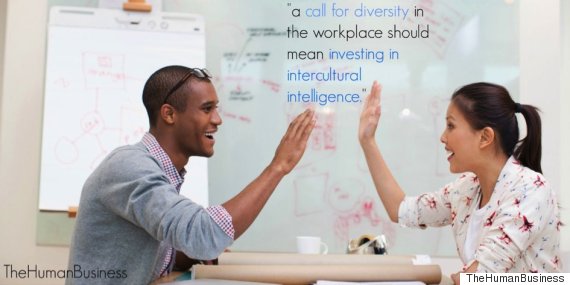 Having spoken about the importance of intercultural intelligence whilst maintaining the balance of a local atmosphere of the workplace and business, I would like highlight a higher level of workplace transformation of the future good businesses. This culture revolution is by no means connected to Mao's -- it is in fact the opposite. It involves embracing and integrating core cultural values that align to a business mission. In the past, the idea of professionalism was brought forth as being a non-human face -- where the workplace was rigid. Today you have more companies embracing a more human work environment -- where your culture and values are not separate from your identity and what you stand for should be constant both in the workplace and outside of it.

The future of good business blurs the lines of the work environment and non-work environment. I believe many companies have learned from Google which has been named the best place to work a couple of times in a row.[7] They have mastered the art of embracing "values and a culture that matters to their demographics."

The world economic forum has outlined the fourth industrial revolution as the digital era that integrates the electronics and Information technology era.[8] Yet with this digital era and a more connected world means now is the time to be more socially sensitive while rebooting our business values to align them to do good in this interconnected world.

From Davos WEF "The Transformation of Tomorrow" session, Amira Yahyaoui stated "The fourth industrial revolution should be a revolution of values." 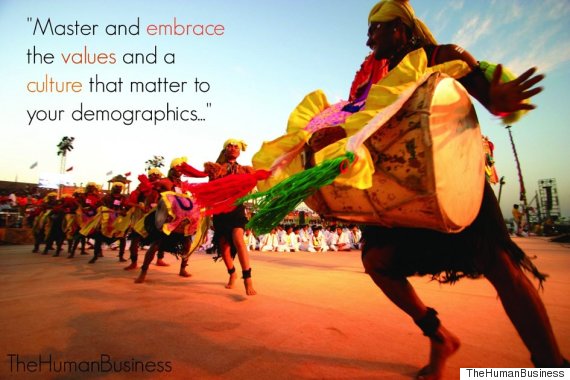 This blog post is part of a series for Paving The Way, a conversation about clearing a path for inclusion and diversity in the workplace. To see all the other posts in the series, click here. To contribute, please email pavingtheway@huffingtonpost.com.