The day my son Joey took his twin sister Nina's hands and said these words, my heart broke. It was such an unexpected and sweet gesture, that I couldn't help but wonder if he could sense, even at the tender age of 3, that his little sister would need some extra hand-holding throughout her life.

It's not surprising to me that Joey has a unique and inexplicable bond with his twin. I'm sure this special connection was formed and flourished in utero. I like to think that they made a pact to take it easy on me, so their movements in my belly were synchronized. They slept, kicked, and twisted and turned at the same time so I could rest and recharge before I had to carry my heavy load again.

After watching a memorable ultrasound image of Nina with her butt in Joey's face, I got my first glimpse into what their interactions and personalities would be like. Nina would be a feisty handful, and Joey would be very patient and understanding in the face of change and adversity.

But when Nina was diagnosed with PDD-NOS in 2011, I worried a small part of their bond started to chip away. They didn't work as a team to make a mess while eating. And they didn't join forces to destroy and knock down any and everything in the house that was at their level and within their reach. Joey started crawling, walking, talking, and feeding himself well before Nina. I know each child, each individual, and each twin has a timetable all of his or her own. There's no "right" time to crawl, walk, talk, or self feed. But my husband and I knew that our daughter was experiencing developmental delays when everything Joey did, Nina did six, seven, or even eight months later. They were no longer in sync. A change was in the air, and everyone in the family could feel it -- especially Joey.

He feels it when Nina throws a tantrum and is disciplined differently. He sees it when Nina is being fed her meals of pureed foods, while he sits like a big boy next to his older brother and eats his food independently. And he especially feels it every time Nina's therapists visit her at home or at school four times a week. The therapists often include him in their play because it helps Nina with turn-taking skills and builds her social skills. But when Nina is taken aside to work privately with her therapists, Joey often feels left out. I try to play with him during this time to keep him occupied and entertained, but I imagine he feels the rift growing between them.

But Joey's love and persistence seem to overpower any wall that may develop between him and Nina. Whenever Nina is upset at home or at school, Joey always goes out of his way to make her feel included. Maybe he senses that Nina's course in life will include moments when her peers leave her out because she has special needs, and sometimes exhibits behavior that is deemed "socially inappropriate."

So Joey comforts her when she's feeling shy and doesn't want to talk and participate. With a loving pat on the back Joey will say, "It's OK, Nina. You can do it." Or "Come with me, Nina." Again, he'll take her hand and walk with her when they are on the playground and Nina is feeling agitated and overwhelmed by the number of kids running past her; a disturbing sound (probably a cough or a sneeze) that someone is making; or the fact that her jacket isn't zipped up all the way. He's her brother and he knows from her cry and her behavior that she needs assistance. When she cries for a toy that Joey has, like any big brother, he will often refuse to give it to her. But then there are other times when her cry or demeanor changes, and Joey will walk over to Nina and give her the toy. He knows. Clearly, their bond is as strong as ever.

Sometimes I worry that Joey won't receive the same kind of reciprocal support or concern from his twin. He often hugs her and kisses her goodbye when he goes to school, but she doesn't hug him back. But when she is really "present" and he comforts her and she hugs him back, it's a beautiful thing to see. I try to capture these moments in a picture or on video because sometimes I'm not sure how often these moments will occur in the coming years. I want them to hold on tight to each other and lean on each other throughout their lives, as siblings should do for each other.

As the sibling in the middle, Joey may always be searching to find his place as the middle child. He's got an older brother that he's always trying to emulate, and a younger sister who as the only girl is likely to be spoiled, and whose development delays require special attention.

But the moments when her love for her twin brother and her family bursts through her delays, we forget about her diagnosis. When Nina reaches for Joey's hand and says, "Hold my hand, Joey. Hold my hand," or "It's OK, Joey, don't cry," I know she understands what she is saying and feeling. More important, Joey understands.

We all just want someone to hold our hand and tell us that everything will be okay. And I imagine that need is even stronger with twins. Maybe their bond will continue to chip away over the years as Nina and Joey have different friends, teachers, and life experiences. But Nina's diagnosis will continue to reshape, reform, and strengthen her bond with her twin and her family, for the better. 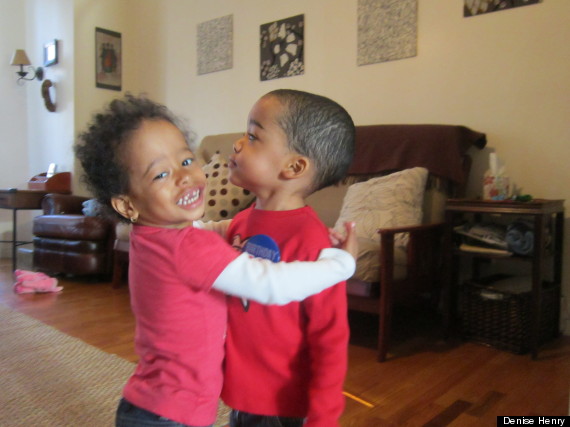