Right now, my 24-year-old daughter and a companion are somewhere along the Blue Ridge Parkway, perhaps at a campground in Great Smokey National Park. I envision the two comely young Sarah Lawrence film school graduates barricaded behind the old Subaru wagon they bought for their road trip, pepper spray and tasers at the ready as toothless, walleyed carnies escaped from the county fair ply them with moonshine, meth and fentanyl. 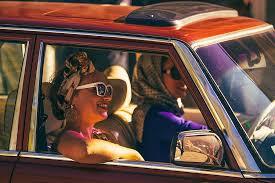 Not that I'm worried or anything. They're big girls; they can take care of themselves. Besides, these National Park campgrounds are safe, right? I mean, two young women circumnavigating the country via the Great American Road should have nothing to worry about in this day and age, what with cell towers on every hilltop and trusty Rangers at every campsite. What could a father possibly have to worry about?

Now, if it were 1976 instead of 2016, back when I was road tripping around the U.S., my parents wouldn't have allowed my sister to tour the country's back roads and campgrounds without a few male chaperones. Like the Cal Bears football team, perhaps. The hazards, it seems, are the same now as they were then.

Weather-related trouble
Flash floods, hailstorms, tornados, black ice etc. are likely to be more intense, at least according to the climate-change scientists.

Road conditions
A landslide, a chemical spill, a jack-knifed big rig, a dead cow in the middle of the road: none of that has changed much.

Trolls Under Bridges
There are probably just as many of them haunting the highways now as there were then. If anything, it would seem that there are more whack jobs, not to mention crooked cops than ever, particularly out in the hinterlands.

Greasy Grilled Cheese Sandwiches
It may be tough to replicate the Northern California gluten/sugar/fat/preservative-free diet in Bad Breath, Arkansas. All the more reason to stock up on Lara Bars and Tums.

The big difference is -- and, from a father's point of view it is huge -- obviously, the technology. Not only can I pester my daughter for daily reports and photos (I won't, but I could), I can also rest easy knowing that the young travelers have access to real-time information about every possible variable that may effect their trip: weather, road conditions, speed traps, detours, campsite reservations, wait times at local restaurants, directions to the urgent care clinic ... it's all there.

Back in '76 we would pick a place out on the map and head in that direction without much of an idea about what lay ahead. My mom loved to travel, and she would break out her AAA guidebooks every time I ventured forth from home. But more often than not my trips would originate from school in Boulder, or from some other residence, and while we might have an ultimate destination in mind we were apt to wander when the spirit moved us.

Today, as I write this, I have my daughter's itinerary before me, facilitated by the online road trip planner, Furkot.com. On July 23rd they will travel exactly 346.8 miles from Baltimore, MD to the Loft Mountain Campground in Shenandoah National Park, VA, where they have reserved a tent-only, non-electric campsite. It will take them five hours, 27 minutes. The longest leg of the trip will be from Badlands National Park, SD to Minneapolis: eight hours, four minutes. All-in-all, they will be on the road eight weeks and will travel roughly 14,000 miles.

It is unlikely that they will run out of gas outside of Fernley, NV at 4AM and have to sleep in the sand until awakened by the local sheriff. Not just unlikely. Impossible. That was 1976 -- the "energy crisis." And, even though I bought her a copy of Joni Mitchell's travelogue of the same year, Hejira, I don't expect her to be agog at the playing of Jaco Pastorius. Nor will she have to worry about wearing out her cassettes, or having to splice the eighth-inch magnetic tape with scotch tape. There won't be any all-nighters fueled by Coke (both kinds) and Kona Gold, no flipping the vehicle on the black ice atop Glorieta Pass outside Santa Fe. These young women aren't foolish enough to pick up solo hitchhikers, like I did on that lonely stretch of twisted Highway 12 between Lewiston and Lolo, only to have my passenger pull a hunting knife on me outside Kalispell.

I'm sure I pulled many other stupid stunts on my various road adventures that my daughter would never attempt. Like re-enacting the Kennedy assassination in downtown Dallas, or driving all night from Boulder to Gonzalez, TX just to go to a Halloween party, or see how fast a Mercury Capri would go on Highway 80 outside Winnemucca, NV. (115 mph) She's not apt to steal a bed in a Telluride hostel and sneak out the next morning without paying, and probably more apt to leave a chirpy review about her rental villa and generously tip the owners for a pleasant stay.

If my daughter and her companion had planned this trip in 1976, many would have thought they were foolhardy, imprudent and possibly daft. Today, when I tell folks about her trip, the sentiment is nearly unanimous: "Now's the time, when they're young;" "What a fantastic experience;" "I can't wait to see the film!" It's true. As filmmakers, they're apt to weave together a visual record of their journey that will tickle their children, their grandchildren, and generations to come (if babies are in their future, that is). All I have from all my highway journeys is a faded, dog-eared paperback journal with stoned meanderings and lame sketches. I can conjure a few, vivid images when I close my eyes, and not as clearly as I used to.

I suspect the sights and the sounds of the cities, the towns, the national parks, and the general roadside attractions won't have changed much. They will relish the opportunity to bring back life long lasting footage from the amazing bustling villas of Florida or the deserted highways that link the west coast to the east shows the variety in this country is still amazing, people included, and that a little cautious curiosity is still likely to yield wondrous rewards. It's possible that my daughter will fall in love with some out of the way place like Marfa, TX, and hunker down for a few years.

I wonder if I could handle such a trip. These days, my worn-out hips complain painfully after more than an hour behind the wheel. Still, my wife and I have retirement fantasies about renting out our house, getting a Sprinter and hitting the road. We would probably have to rent a house with a pool along the way for a few days, just to work out the kinks, cramps, sores and sleep in a big cushy bed. In fact, the more I think about it maybe we'll just rent the house, fly to the nearest airport, take a limo and leave the road-tripping to the kids.