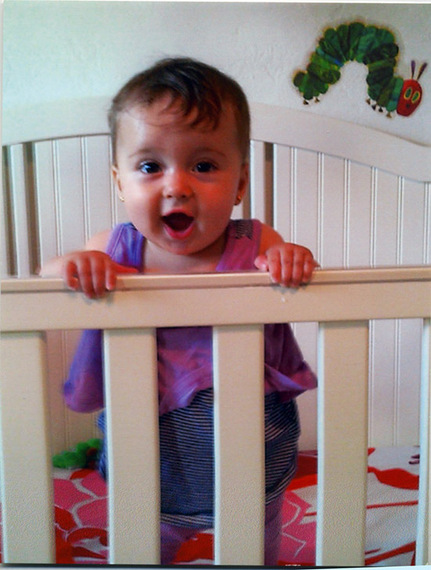 Amalia was born, turning me into a grandmother, over four years ago, and I wrote this post when she was 9-months-old. Today second grandchild Nicolas is 14-months-old and I find myself wondering the same thing as he sings his "happy eating" song while I'm feeding him or shrieks with excitement at seeing the ducks in the lake near our home.

It's been a privilege and an inspiration to spend time with granddaughter Amalía during her first nine months of life, as she discovers her body (first hands, then feet) and the world around her.

Nearly 40 years ago, when my own three children were born, I watched our firstborn's first year -- even took some notes that ended up in a child development text book -- but by the second, there was no time for taking notes and by the third, not even a baby book stuffed in a closet in a bag filled with souvenirs.

I had forgotten until now the overwhelming joy with which a baby meets the world (as long as she's not ill or in pain). To see Amalía light up and squeal with joy when she wakes up from a nap and sees your face is enough to make any day wonderful.

She loves to eat (anything including vitamins and paper towels) and when she's fed something she really likes, she will croon and sing and even clap her hand in appreciation. Once she liked her food so much she stood up in her high chair and did a little dance of joy before plopping down and opening her mouth for more like a baby bird. She'll "read" her picture books by herself, pointing and squealing at the baby animals.

The things that make a toddler ecstatic are so simple: blowing soap bubbles, stomping in a puddle, playing peek-a-boo, feeding pigeons. The things that elicit that throaty little giggle the ones that are at first surprising and perhaps a little scary but then turn out to be funny instead.

Until she was about 8-months-old, Amalía loved everyone, and when I pushed her stroller down the street she'd babble and wave to passers-by, even homeless people in doorways and construction workers on a cigarette break. Everyone responded to her as we passed: "Hey! That baby's talking to me!"

Now, at nine months, the slightest tinge of stranger anxiety has crept in. She won't go into the arms of a newcomer until she's had about 10 minutes to get to know them. But if she's sitting next to you in an airplane or restaurant or on the playground, she'll soon pat you on the arm to say hello.

And although no bad thing has ever happened to her, Amalía's starting to fear things that she never noticed before -- like a large stuffed lion in a toy store, or the guttural voice that comes out of one of her counting toys. A lot of her "job" these days is figuring out what is real and what isn't. And I know the stranger anxiety is a necessary skill -- undoubtedly an instinct useful for survival.

All babies and children are filled with joy -- just in being alive. Look at puppies or colts in a field. What a child needs to be perfectly happy is so simple: warmth, food and the feeling of security -- knowing they are protected by someone more powerful than they are. It's such a shame that every child can't be guaranteed those basic things during the critical first years of life.

And they need a person to interact with them -- to echo their feelings and show them the world around them. While pushing a stroller every day to Central Park, I kept seeing moms and nannies perpetually talking on their cell phones while the child in the stroller is staring straight ahead with vacant eyes.

Outside the apartment where she lives, Amalía hears someone vacuuming the carpet every afternoon, and the roar of the vacuum cleaner has started to worry her. When she frets, I take her into my arms and reassure her that there's nothing out there to be afraid of.

How terrible it must be for parents who can't tell their babies that with conviction -- because the child is ill or there's no money for food, or because the living situation is dangerous, as it is for those children who were executed in Syria recently.

But no matter how protected and cared for Amalía is, I know the bubbling joy she shares every day with eventually fade. We're all familiar with temper tantrums and the terrible twos. Does anybody know a pre-teen so thrilled by dinner that they'd jump up and dance with joy? Or laugh in ecstatic surprise at soap bubbles floating around them?

I think of people my own age who reply to "How are you?" with a litany of aches and pains, and seem to walk around with a cloud of gloom hanging over their head.

No wonder friends have been telling me for years that grandchildren completely change your life. Just the sight of Amalía's delight in her new world is all the motivation I need to try to take are of myself and stay alive longer than my parents did, so I can watch her grow and learn. I hope she can hold on to the joy.

Where Does The Joy Go?
The World's Most Glamorous Grandmothers