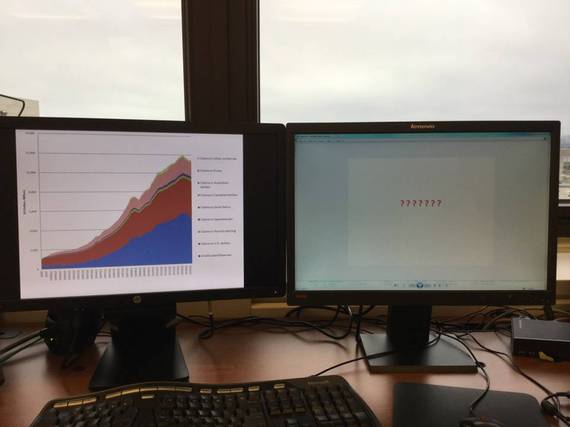 After a exponential rise in foreign exchange reserves accumulation by emerging markets from 2000 onwards, the tide seems to have turned south since mid-2014. Changes in capital flows and commodity prices have been major factors behind the inflection, with the new direction expected to remain, given the context of the global economy going forward. Although it is too early to gauge whether the on-going relative unwinding of such reserves defenses will lead to vulnerability in specific emerging markets, the payoff from strengthening domestic policies has broadly increased. Emerging markets foreign exchange reserves reached a peak in mid-2014

One of the landmarks of the global economy in the new millennium has been the steep rise in foreign-exchange reserves held by central banks. From a total of US$ 1.8 trillion in 2000, global reserves reached a peak of US$2 trillion by mid-2014. They have declined since then (Figure 1) Figure 1 - World Currency Composition of Official Foreign Exchange Reserves 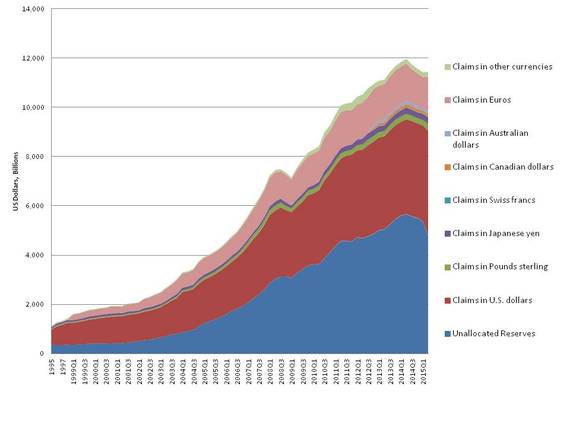 The accumulation of foreign exchange reserves by emerging market economies has been a major factor during both upward and downward phases of the tide. Although the growth of reserves in China and other non-advanced Asian economies accounted for more than half of the expansion of reserves during the new millennium, emerging economies of other regions also experienced substantial increases (IMF, Assessing Reserve Adequacy, February 2011). After a brief slowdown during the global financial crisis, the pace of accumulation by emerging market economies partially recovered, until the decline started around mid-2014 - this time also taking place in China (Figure 2). 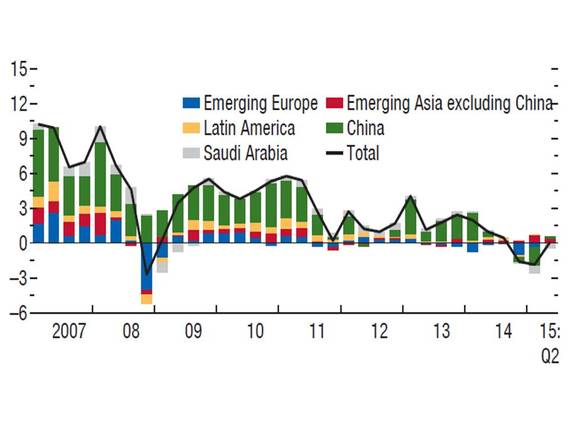 The global decrease of foreign exchange reserves by central banks since the second half of 2014, is to some extent explained by exchange rate changes, namely the euro and yen depreciation vis-à-vis the dollar, given the proportion of reserve assets denominated in the former currencies (Figure 1). In addition, changing trends in capital flows to emerging market economies and the sustained fall of oil prices - see Canuto, O., BRICS apart as oil prices plunge - were major contributory factors behind the decline in reserves accumulation (IMF, 2015 External Sector Report, July 2015).

Changes in capital flows to China have been remarkable. The combination of a huge current account surplus and a private sector capital surplus from 2001 onwards, led Chinese authorities to stockpile dollar reserves from US$ 170 billion in 2000 to US$ 4 trillion in August 2014, in order to contain what would have otherwise been a major exchange rate appreciation. The real exchange rate nonetheless appreciated by around 40 per cent after 2007, while the current account surplus moved down from 11 per cent of GDP in 2000 to 2 per cent last year. Moreover, private capital flows turned negative since mid-2014, partially as a result of unwinding interest carry trades, given expectations of no further exchange-rate appreciation and interest rate reductions. According to Gavyn Davies, Financial Times, September 21, 2015:

"In the past 12 months, private sector capital outflows have proceeded at a generally orderly pace, but have still forced China to reduce its reserves by $400 billion in order to prevent a precipitous drop in the exchange rate. It was not until the PBOC announced an adjustment to its exchange rate mechanism on 11 August, triggering fears of future devaluation, that the capital outflow hit crisis proportions. During August, the reserves dropped by $94 billion on the official figures, and many analysts think that disguised intervention in futures and options markets increased the genuine figure for currency support to over $170 billion last month."

The deceleration of gross capital inflows also happened to other emerging markets (Figure 3). Such a change was not uniform - Russia suffered a collapse of flows, whereas India retained stable gross inflows - but the tide has clearly reversed since last year for most emerging markets. Given slowly changing current-account balances, shrinking capital inflows were mostly matched by the decline in net purchases of foreign assets shown in Figure 2. Figure 3 - Gross Capital Inflows to Emerging Markets (excluding China) 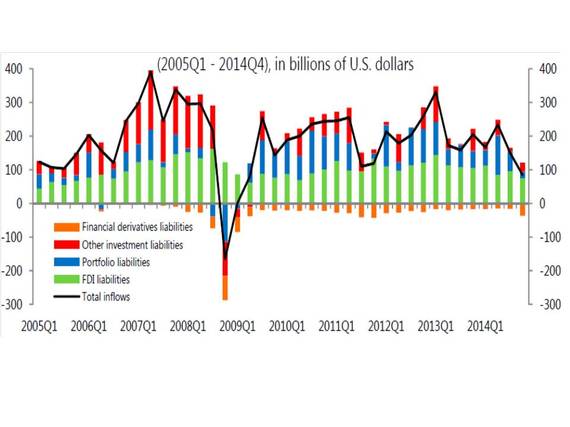 In addition, due to the plunge in oil prices the highly concentrated group of large oil exporters - 10 countries account for 75 per cent of world oil exports - were now confronted with shrinking current account surpluses and reduced foreign asset accumulation. Figure 4 depicts the resulting evolution of gross international reserves of the 29 large economies covered by the annual "External Sector Report" of the IMF. As indicated in the latest issue (IMF, July 2015, p.14):

"The pattern of slowing reserve accumulation is broad based and includes declines in international reserves holdings by some oil exporters (e.g. Russia, Saudi Arabia), reflecting reduced oil export revenue as well as the riyal's peg to the U.S. dollar and the managed float of the ruble in place till late 2014, and to a lesser extent Malaysia. As an exception to the general pattern, in Switzerland, strong capital inflows and appreciation pressure starting in late 2014 led to rising reserve holdings in the context of an exchange rate floor with respect to the euro established in 2011. The central bank removed that floor in mid-January 2015, with limited intervention after end-January." Figure 4 - Gross International Reserves, 2005Q1-2015Q1 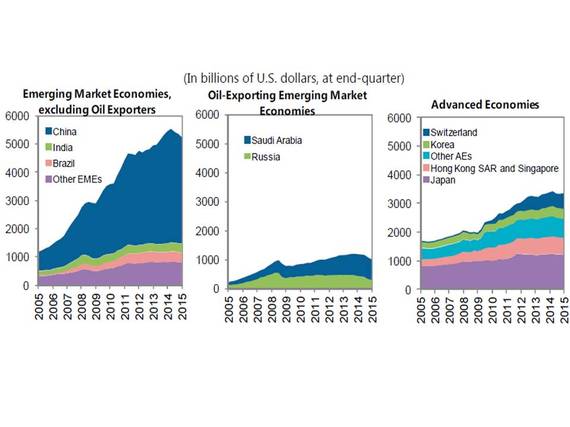 The underlying factors behind the recent reversion in capital flows and reserves accumulation by emerging markets are expected to remain in place in the near horizon. Quantitative easing (QE) policies in the Eurozone and Japan are not expected to create a liquidity "push" factor for capital flows to emerging markets commensurate with that of the U.S. QE. Furthermore, global economic prospects as envisaged by the latest IMF's World Economic Outlook point to a slight pick-up in growth for advanced economies, whereas emerging market and developing economies are expected to exhibit further growth deceleration. After mid-2014, most countries facing depreciation pressures against the rising U.S. dollar have opted to not spend reserves on a large scale to sustain their currencies, which favors the likelihood of future current-account adjustments to the new reality of capital flows. Nevertheless, the realignment of current-account balances is expected to happen gradually, while it is highly possible that net capital outflows will correspond to some extent with the depletion of reserves for some time going forward.

What about the adequacy of emerging markets reserves? They are costly to hold, as they usually imply a negative carry trade, with yields on reserve assets typically lower than interest rates paid on outstanding long-term debt and/or opportunity costs of frozen capital. Therefore they must serve some purpose. Given that reserve levels are certain to fall, could this inadvertently result in inadequately low levels?

Foreign exchange reserves are stored for several reasons, as illustrated by reserve managers in their responses to a survey conducted by the IMF (Assessing Reserve Adequacy, February 2011). Apart from savings for future generations (as is the case when Sovereign Wealth Funds are added as reserves), management of exchange rate levels, bank recapitalization costs or others - like matching domestic currency in the case of currency boards - reserves are held mostly for precautionary reasons. Monetary authorities need to keep assets readily available and liquid to address potential balance of payments needs: to serve as a buffer for liquidity needs, smooth exchange rate volatility, guard the economy against shocks and so on. Ironically, the confidence creditors place in the stability provided through the acquisition of reserves ends up reducing the spreads on the bonds issued, and therefore diminishing the negative carry trade on the invested reserves.

The heightened precautionary stance in some economies appears to be correlated with greater financial deepening and integration with the rest of the world, particularly if it holds a negative net international investment position. This has been a "hardly-won" lesson learned through the multiple experiences of "sudden stops" in capital flows and recurring crises in emerging markets and advanced economies, since the dawn of the current era of financial globalization over several decades - Smith, G. and Nugee, J., The Changing Role of Central Bank Foreign Exchange Reserves, OMFIF, 2015.. In effect, notwithstanding the necessity for reserves accumulation to avoid domestic currency appreciation in some countries, the build-up of huge piles of foreign exchange reserves depicted in Figure 1 cannot be understood without being cognizant of the increasing weight attributed to precautionary motives.

What are the adequate levels of reserves for any given country remains an elusive question. The IMF (Assessing Reserve Adequacy-Specific Proposals, April 2015) proposes adequacy considerations by types of economies, differentiating them in accordance with financial and economic flexibility and degree of market access. Traditional benchmarks - import cover, ratios of reserves to short-term debt, ratios of reserves to broad measures of money, or combinations of those - are often used by analysts, but they require further country-specific considerations. Models of optimal reserve estimation - like the one developed by O. Jeanne and R. Rancière, IMF Working Paper WP/06/229, 2006 - attempt to balance avoided economic costs (in terms of output and consumption potentially lost) with the opportunity costs of storing reserves, and also takes into consideration degrees of risk aversion. As all this remains a work in progress, precaution tends to favor the retention of reserves above such indicators to ensure there is a reasonable buffer in place.

Notwithstanding the difficulties in assessing the extent to which the on-going dwindling of foreign exchange reserves will result in individual emerging economies becoming too vulnerable, one can expect a relative weakening vis-à-vis the ascent phase until mid-2014. Another unambiguous takeaway is the need to be cognizant of the fact that foreign exchange reserves are not the only defense a country may have against shocks. Sound macroeconomic and prudential policies are the ultimate determinants of a country's resilience to both endogenous and exogenous shocks..

Reserves are likely not enough to counter sudden capital outflows and crises, sooner or later, in the presence of high and unsustainable public debt, persistently high inflation due to inadequate monetary policy, currency misevaluation, and deficient financial supervisory and regulatory frameworks that prove ineffective to curb contingent risks from the financial sector. High volumes of reserves may partially compensate for policy weaknesses in some of these dimensions from the standpoint of capital holders. However the payoff for improving domestic policies has broadly risen for emerging markets in the context of the current global economic environment.

Otaviano Canuto is the executive director at the Board of the International Monetary Fund (IMF) for Brazil, Cabo Verde, Dominican Republic, Ecuador, Guyana, Haiti, Nicaragua, Panama, Suriname, Timor Leste and Trinidad and Tobago. Views expressed here are his own and do not necessarily reflect those of the IMF or any of the governments he represents