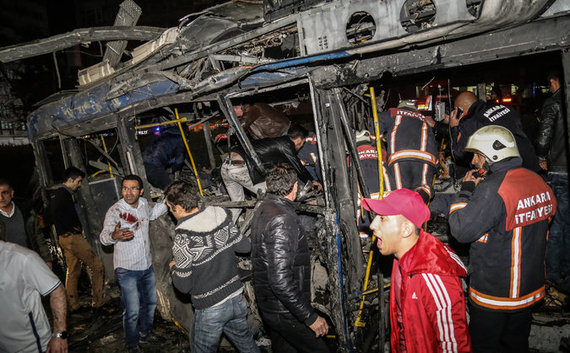 Car bombs and suicide bombing attacks that have swept through the Middle East in the past decade are making a stop in the region's most stable and prosperous country -- Turkey. Did Ankara's reckless foreign policy come to haunt it?

First Suruc, then Ankara, then Istanbul and again Ankara. Hundreds of civilians lost their lives in bombing attacks, which take place as the Turkish military is battling Kurdish insurgents in the country's restive Southeast. But who is bombing these cities?

Turkey has no one enemy and victims of the attacks are not from one segment of the society. The attacks do not fully bear hallmarks of terrorist acts of groups we know. In Suruc and Ankara, for example, most of the victims were Kurdish activists. In Istanbul, mostly German tourists were targeted. In the latest two attacks in Ankara, military personnel and state apparatus are targeted. Sunday's explosion ripped through a bus stop in Cankaya, in the country's political heartland.

The attackers make sure to signal that they're aiming at the country's military and state establishment, do not spare foreign tourists and are ready to instill fear in the hearts of ordinary Turks.

The Sunday attack in Ankara claimed the lives of more than 30 people and more than a dozen of them are still in critical condition. The attack unleashed a spate of political recriminations on the social media, with critics demanding the resignation of senior officials. Obviously, no surprise on that front.

The bombing attacks in Turkey's largest cities are already a recurring nightmare and the government did not waste time in capitalizing on the people's anger on Sunday. "We will use our legitimate right to self-defense to the fullest extent," President Recep Tayyip Erdogan said in a statement, signalling a widening crackdown on Kurdish militants. He appeared to blame Kurdish militants for the attack, which he claimed came as a result of their "losing" battle with the Turkish security forces.

Erdogan also blamed previous attacks on the Kurdish militants, hoping to tap people's anger in his war against the Kurdistan Workers' Party, or the PKK. The attack in Ankara does not bear the hallmarks of attacks perpetrated by the PKK. Kurdish militants rarely attack civilians, let alone conducting large-scale indiscriminate assaults in dense urban areas. Rogue, small Kurdish groups could be behind the attack, but it is doubtful if they are capable of such an attack.

As deadly attacks came to symbolize the security threats Turks are facing over the unceasing turmoil in the region, Turkish officials find themselves struggling in explaining how they failed to see them. The failure to prevent the attack in Ankara points to a deep rot in the country's intelligence organization, which has been under fire for carrying arms to Syria's rival factions. Adding fuel to a controversy was a warning by the US embassy just two days before the attack, anticipating a possible attack in Ankara. It was not clear why the Turkish authorities did not warn their citizens.

The attacks appear to mark a new era in Turkish history, with a popular government unable to stem the violence haunting ordinary people in large, urban areas. The singularities the Erdogan government has ascribed itself, such as the political and economic stability, seem to be slowly fading away. The recurring violence in Turkish cities helped shatter the image the Turkish government had worked hard to establish. The attacks bring fresh attention to a question that critics long asked: Is the Turkish government losing control over the country? Immediately after the attack, a Turkish court imposed a media blackout and shut down Twitter and Facebook to contain the mounting anger.

For over four years, since the war has started in neighboring Syria, Turkey adopted an open-door policy for Syrians fleeing violence. No one knows what type of criminals slipped into Turkey among these refugees. Islamic State cells within Turkey somehow managed committing attacks despite ongoing monitoring by the Turkish intelligence. Turkish authorities said after the attack in Ankara last year that they had been monitoring the cells involved in the blast.