Often there's a fine line between fascinating and repulsive -- as Kanye West proves. Within the gray area, popping pimples falls somewhere between Yeezus and pulling gunk out of your shower drain. Check out Sandra Lee, MD, a dermatologist in Upland, CA, who goes by the alias Dr. Pimple Popper for proof. Her YouTube and Instagram accounts each have over 1 million followers, who watch her videos of the cheesy, lumpy, pussy, gritty, and goopy substances she extracts from the faces of her patients.

Dr. Lee has tapped into an audience that can't get enough of our urge to purge -- whether we're vicariously enjoying it on Reddit or doing DIY dermatology in real life. "I think watching popping is similar to seeing a scary movie or riding a roller coaster for some," she says. "You get a rush of euphoria and excitement."

The problem with popping, squeezing, and picking is that we know we can do some serious damage and make problems even worse. Yet we just can't keep our hands off. So before you start digging into your skin problems, you should learn what's happening to your brain chemistry and how you're damaging the structure of your skin.

Why We're So Hands-On With Our Skin
When you have an Everest-sized zit, the reason you have to pick it, to paraphrase George Mallory, is that it's there. "In the moment, people feel like they have to do something," says Amy Wechsler, MD, a dermatologist and psychiatrist in New York City. "The occasional popper or picker thinks they're making themselves better -- they think they're helping." In other words, we're trying to be problem-solvers -- or more like control freaks, Dr. Wechsler says. The immediate gratification of seeing stuff ejected from your pores feels productive.

The satisfaction of extracting a blemish releases dopamine, which activates the brain's reward center, explains Heather Berlin, PhD, a neuroscientist and assistant professor of psychiatry at Icahn School of Medicine at Mount Sinai Hospital in New York City. "There's a cycle of anxiety or arousal before the act and a sense of relief after," she says. So there's a physical release of pressure from the extracted blackhead or squeezed whitehead, as well as a mental sense of calm and pleasure. It's hard to fight that combo.

Some people go beyond the occasional pop and develop serious habits. "There is a spectrum of behavior that ranges from normal urges to pick to disorders like acne excoriée and Skin-Picking Disorder, which are related to OCD," Dr. Berlin says. When the behavior is interfering with your daily life -- your job, socializing, relationships, health, sleeping -- you've veered into clinical territory.

Often compulsive behavior or a lack of impulse control is to blame. Dr. Berlin explains that people with impulse control problems may have an underactive prefrontal cortex, which serves as the brakes for the brain. If your prefrontal cortex is slow to react, your brain has a harder time resisting impulses -- so much so that some people can't pass a mirror without looking for something to pop.

Most of the time the act is so pleasurable, that it is hard to stop, Dr. Berlin says. If popping feels good and you're seeing results, why would you stop? "The people who feel guilty are the ones who think the behavior is abnormal -- that's who comes in for treatment," she says. 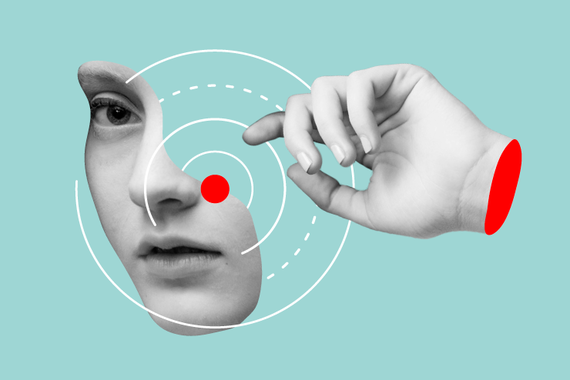 When Popping Becomes A Problem
Picking isn't a crime. In fact, Dr. Berlin says it's an absolutely normal behavior. (From an evolutionary-biology standpoint, we want to remove bumps from our skin because they could be parasites or infections, she explains.) But the problem is that we treat popping and squeezing like we do watching Gilmore Girls -- it's a challenge to stop doing it.

"The issue arises when you keep picking and ultimately cause more harm than good," says Joshua Zeichner, MD, director of cosmetic and clinical research in dermatology at Mount Sinai Hospital. "The problem is that when you don't see the result you want, it's easy to keep going -- and that's when the damage happens."

Worst-case scenario: You cause an open wound or infection. "I've seen this many times," Dr. Wechsler says. Now, you've extended your healing time and set yourself up for scarring and more breakouts -- it's a vicious cycle.

Like the proverbial iceberg, most of the blemish is below the surface. The clogging and inflammation that's causing the pain and swelling lies deep inside the pore. "Squeezing can cause more inflammation, push dirt and debris further down, and rupture the follicle -- you're causing collateral damage," Dr. Zeichner says. "The effects of squeezing are the worst when you're not getting the contents out of the skin, so you squeeze more."

Inflammation, from the original breakout or from squeezing, causes damage and scarring. "Your body creates a 'patch' to address any skin damage," Dr. Zeichner explains. "You produce new collagen, but it's not organized and smooth -- it's thick and disordered. It doesn't look like normal skin, and looks like a bump or depression." Too much damage disrupts the connections between skin cells, he says, so the body tries to reconnect them with scar tissue.

In the attempt to shield your skin from more damage, your body also creates pigment in response to inflammation -- much like you tan after UV exposure, but in a more localized way. "If you have more red pigment in your skin, you'll have more residual redness," Dr. Lee says. "If you have a darker skin tone, you're more at risk for post-inflammatory hyperpigmentation." But there's no way to predict the exact way your skin will respond. The only way to avoid scars is to be hands-off.

How To Handle Your Popping Urges
"My job is to give you nothing to pick," Dr. Wechsler says. So your best coping mechanism is to see a professional to figure out how to clear up your skin. But even Kendall Jenner has the occasional zit crisis, so it takes some effort to avoid Pimple-gate.

Dr. Wechsler also suggests some behavior modification -- limiting time in the bathroom and putting Post-its on the mirror that say "Hands off" or "Leave it alone." For more extreme measures, Dr. Berlin suggests treating a popping problem the way you might treat a smoking habit -- wear a rubber band around your wrist and snap it when you have the urge, or reward yourself for every day you go without popping.

"I tell patients to apply a spot-treatment cream, or cover the area with a Band-Aid when they are at home to remind them not to pick," Dr. Lee says.

Simple distraction also helps. Celebrity aesthetician Renée Rouleau sells a toy that busies your hands and prevents you from poking at your face. Other derms suggest worry stones or Silly Putty as diversions. But perhaps the most satisfying skin-popping surrogate is found at Staples -- take out your frustration on a roll of bubble wrap.

For those who really need a fix, there are always Dr. Pimple Popper's videos. "Sometimes watching the video can bring the same satisfaction as actually popping," Dr. Berlin says. Dr. Lee says you don't have to be a popper to benefit from her cathartic videos. "I think my videos make a lot of people happy in general," she says.

The grown-up guide to dealing with acne. Read more from The Acne Diaries here.