To paraphrase Einstein 'Passion without science is blind, and science without passion is lame'. The case for human expansion into the cosmos is often made with passion but involves little actual science. Here's what I mean.

First of all, whether humans reach the stars, or even destinations in the outer solar system, is not a matter of technology at all, although it is often couched in these terms. Proponents love to invoke the 'If you build it they will come' and Human Manifest Destiny arguments for space travel at these scales. All you have to do is invest in the creation of the infrastructure for travel (rockets etc) and that alone will open up the universe to humanity. But in actuality, whether we decide as a Society to make the journey or not is not an engineering question at all .Instead, it is the result of answering the three questions human explorers have had to answer. Where should we go? What will we do when we get there? and How will it benefit folks back home?

For millions of years, human exploration has been on foot, and we have moved from place to place within a very lovely and nurturing biosphere. We have not had to drag along our own oxygen supply and food as we went. We have not had to live in pressurized spacesuits or confining habitats as we traveled from Africa to Northern Europe and the Americas. All we needed to do is to follow our migrating food supply and wear a bit of clothing. This has led to what is essentially the genetically-inherited notion that humans should, and can, always expand into new niches of the world with a little bit of ingenuity and a hungry stomach. In essence our Manifest Destiny of travel and exploration is literally an idea carried in our genes. Even most non-human species have this same notion, though they do not verbalize it as well as we humans. There is absolutely no penalty for acting upon this exploration meme, and no matter in what niche you end up on the face of Earth, you can always create a suitable set of technological solutions to help you adapt to the climate and hunt for food. In most cases, it costs next to nothing to set up these habitats as any Alaskan survivalist will be more than happy to tell you. All you need is an ax and a stand of trees. But as anyone will tell you, these are not the conditions that prevail in space.

There is not a single destination in the solar system where humans can survive without a spacesuit and a confined, pressurized and sealed habitat. I am not making this up because I am a dour astronomer trying to crush your dreams of colonization. So already as humans accustomed to open spaces and the freedom of wearing light clothing most of the time, we are already out of our league when it comes to living on the easily accessible landscapes beyond Earth. What does Manifest Destiny look like under these conditions? Instead of it being supported by the inexpensive demands of walking around in our nurturing biosphere, it is now a socially--costly activity for those living on Earth with no prospects that more than a few hundred of the 7 billion humans will directly benefit from the journey. As any space economist will tell you, what is mined and created in space has to stay there. Again, it has nothing to do with the particular technology for getting there.

A bit of history.

Right now, it cost $150 billion to create the International Space Station in near-Earth orbit. This 6-person, cramped, rabbits-warren of tunnels is constantly re-supplied by cargo shuttles carrying oxygen, water and food to keep astronauts alive. The ISS is also close enough to Earth that, psychologically, the astronauts still feel connected to the lovely Blue Marble they see outside their windows. They can even Tweet and Skype! Physiologically, although we can stem the tide of muscular and skeletal degeneration, on long-term visits, the immune systems of astronauts get trashed. Keeping people in aseptic environments is the fastest way we know to weakening the immune system, but this is the assumed environment for space activities: No dirt allowed! 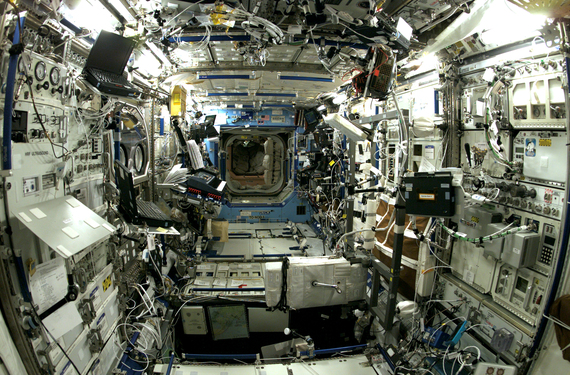 No other major human expedition on Earth was launched for purely scientific reasons. They were always based upon a geopolitical (national pride) or economic ('There be gold in them thar hills!') argument whether it was Marco Polo, Leif Ericsson, Sir Francis Drake, or the NASA space program, which took us to the moon. For anyone to argue that 'striving to explore the unknown' is the primary reason, neither does not understand actual human history nor understands how human exploration has been carried out and for what reasons. It has always been for economic returns, or a demonstration of political prowess, or security.

So what do we do?

Space beckons, but only a dispassionate assessment of our motivations will land us upon an actual working strategy that can be widely embraced and lead to traditional, and perhaps ancient and genetically-based, reasons for undertaking the effort. Self-preservation is the biggest of these, and it is also the easiest to comprehend. That is why a vigorous program of planetary defense needs to be reasserted as a major priority. If the 2015 Chelyabinsk Meteor had detonated over New York City, casualties from flying glass alone would have been in the thousands. That, by the way, is more than the anticipated Mars colony size for the next 100 years.