(Photo by Paula Silva via Flickr.com, licensed under a Creative Commons License)

"Maybe you could talk to a counselor about that."

That's what a good friend wrote to me a few months ago after I confided in her. I had mentioned the enormous stress in my life. The bouts of sadness. The loneliness I was feeling.

Talking to a counselor or psychologist is the kind of advice I used to give all the time. For most of my life, I was a big believer in the power of counselors and psychologists to guide us through life's challenges. After all, it was a psychologist in a university counseling center who helped me cope with the loss of my mother at the tender age of 17.

But when I read my friend's suggestion to talk to a counselor, anger coursed through my veins. The last person I would ever talk to would be a psychologist. Just thinking of psychologists made me want to scream.

That's because I've lost my trust in psychologists and the psychology profession, thanks to Idaho State University.

It's hard to believe there was a time when I was actually grateful to Idaho State University.

When they accepted my husband Jun Yu into their clinical psychology PhD program in 2008, I overflowed with appreciation for the university. It's not easy to get into clinical psychology PhD programs - they're among the most competitive in the country. But more importantly, my husband could finally pursue the degree of his dreams. He had always hoped to serve the people as a psychologist.

At Idaho State University, my husband poured five years of hard work into earning his clinical psychology PhD. He successfully defended his dissertation, based on a clinical trial. He had a 3.69 GPA, earning As and Bs in all of his required coursework. He was in good standing and not on any form of academic probation. 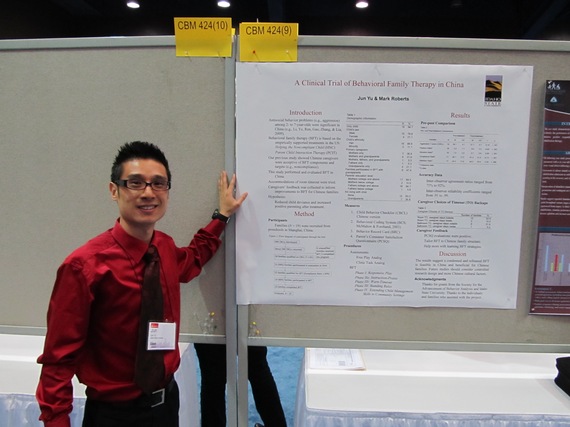 (Photo of Jun Yu from the author)

Yet, on May 3, 2013, Idaho State University dismissed my husband from the program without any warning or remediation, alleging unsatisfactory progress. When they tossed him out, he was only months away from finishing the program. That's right -- only months to go.

Even worse, despite my husband's successful defense of his dissertation, Idaho State University denied him the PhD he rightfully earned.

Even if you know nothing about the law or professional standards, what Idaho State University did to my husband is a clear violation of common sense in dealing with students.

The Ethical Principles of Psychologists and Code of Conduct from the American Psychological Association (aka the APA Ethics Code) is a set of standards that every licensed psychologist in the US is bound to follow.

I once paraphrased the APA Ethics Code's five ethical principles that guide and inspire psychologists, and they suddenly read like a personal motto everyone could aspire to: Do good and do no harm. Be responsible. Be honest. Be fair. Respect the rights of others.

The manner in which my husband was dismissed by the university violates all five ethical principles.

It seriously harmed my husband and did NO good.

It was NOT responsible to suddenly dismiss him with no warning and no remediation, and deny him a PhD.

It was NOT honest to do a sudden attack on him.

It was NOT fair to take away the PhD he rightfully earned.

And it showed an utter lack of respect for my husband's rights, especially due process.

It's no wonder, then, that leading psychologists have written expert reports concluding the following:

"It is clear that Mr. Yu suffered serious harm because of several significant ethically questionable behaviors at the hands of ISU faculty.... Taken as a whole, the actions of the faculty at ISU in dismissing Mr. Yu as they did constitute, in my opinion, substantial arbitrary and capricious and departures from accepted academic norms in clinical psychology doctoral programs." (Page 25, Docket 22-1, Yu v. Idaho State University)

"It is my opinion that the dismissal of Mr. Yu from ISU's Clinical Psychology Ph.D. Program was excessive (especially when considering that an appropriate formal remediation had not been attempted), unjustified, and objectively unreasonable. In my opinion, the actions of the faculty at ISU in dismissing Mr. Yu as they did, was a substantial departure from accepted academic norms." (Page 36, Docket 22-1, Yu v. Idaho State University)

When I used to flip through my husband's old ethics in psychology textbooks, they mentioned how ethical violations at the most serious levels could cause damage to the psychology profession. Before, I never quite understood that - but, sadly, now I do.

The fact that I no longer trust psychologists is painful evidence of how Idaho State University has seriously damaged the profession of psychology. And as grateful as I am for leading psychologists to stand up for the profession in their expert conclusions, I'm not even sure if their efforts will entirely change my feelings.

Every time I think about how people from the so-called "helping profession" could wreak so much harm in a student's life, I feel sick and enraged.

And since Idaho State University left my husband with no other option other than an incredibly expensive lawsuit to solve this whole mess (which never should have happened in the first place), the harm continues.

ISU's wrongdoing has thrown us into extreme adversity. Financially, we're in a terrible place; we're nearly $200,000 in debt and it's difficult trying to put together funds to manage our monthly legal costs. (A recent monthly bill was over $40,000.) We're emotionally taxed by this nightmare of situation -- and the worst thing is, it's uncertain how long we'll have to keep going before justice prevails.

It's not surprising, then, that I'm stressed out, sad and - because lawsuits against universities in these circumstances aren't exactly "very relatable" for the average person - feeling lonely.

So, please, don't suggest I talk to a counselor. Don't tell me it would help - because, really, it's not going to end the real trouble in my life. I'm holding out for the ultimate solution to this problem: justice for Jun, and holding Idaho State University accountable for every wrong they committed against him.

If you care about student rights and academic standards, help support my husband's case at Generosity.com, where you can also watch a moving personal video from him.