As the crisp autumn breezes whip into wintry winds, I get that same old feeling about being able to wear my vintage furs again.

Perhaps nothing else in my wardrobe has the power to make me feel as regal and glamorous, or as anxiety-ridden.

Living and working in Washington, where everything and everyone is judged and appraised in political terms, I'm cognizant that fur is polarizing and offensive on both sides of the political aisle.

Once I Facebook-friended the wife of a high-profile American politician and received a message from her explaining to me that she'd be happy to accept my virtual friendship if I removed my profile picture in my rabbit capelet.

When I was a reporter at the Washington Times, I regularly corresponded with Mrs. Obama's press liaison, and was told, in no uncertain terms, that she will not wear fur, despite her penchant for patronizing top designers.

Can you imagine Mrs. Romney or Mrs. Perry on the campaign trail in fur?

She would be nailed to the cross as the GOP's Cruella de Vil.

The public boycotting by some of the world's most elegant women has made my fur wearing all the more unsettling for me.

I get the impression that they pine to wear fur publicly, but are running scared.

How things have changed since Jacqueline Kennedy warmed her hands inside a fur muff while her husband was being sworn in as President of the United States.

This passionate but uneasy history with fur was the topic of conversation last Friday at Saks Fifth Avenue in Chevy Chase, when I had the pleasure of meeting Giuliana Teso, one of Italy's top fur designers, whose luxurious fur jackets and handbags are now being carried in Saks' fur boutiques. 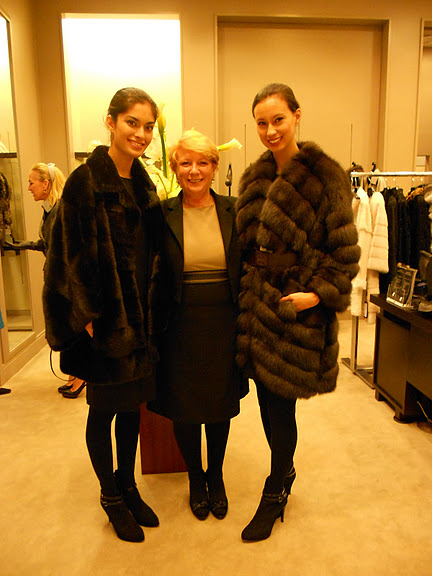 "It's about freedom of choice," Teso told me emphatically in Italian, explaining that in Italy and Europe, women don't have the same reservations about fur as we do here. 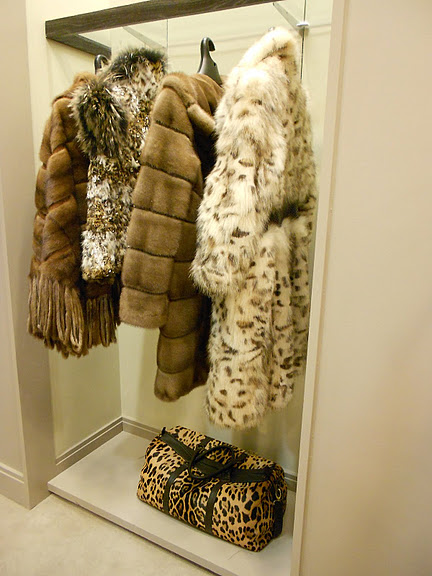 She points out the hypocrisy in many of the celebrities who pose for PETA posters claiming they'd "rather be naked than wear fur" while waltzing down red carpets in leather, and other products made from the hide of an animal.

"They don't feel embarrassed," Teso says of her clients, many of them Americans.

Vogue editor Anna Wintour has been equally unabashed in her promotion of the fur industry, in spite of a barrage of attacks.

"I don't like to travel with security, but it got to the point when I was having thrown pies and rice and fake blood and all sorts of things thrown at me," she told 60 Minutes.

"And it just became easier to use the security. I mean, was I going to not have security and not wear fur? No way."

So I'm embracing Teso's "personal choice" philosophy and Wintour's steely fortitude, and wearing my furs this winter without shame.

I'll also be donning cashmere, eating beef, and thinking for myself.

Wearing fur may not be politically correct, but being comfortable with one's self is the definition of chic.
I'd rather be chic.

More:
StylefurFashion
Newsletter Sign Up
An essential daily guide to achieving the good life
Subscribe to our lifestyle email.
Successfully Subscribed!
Realness delivered to your inbox