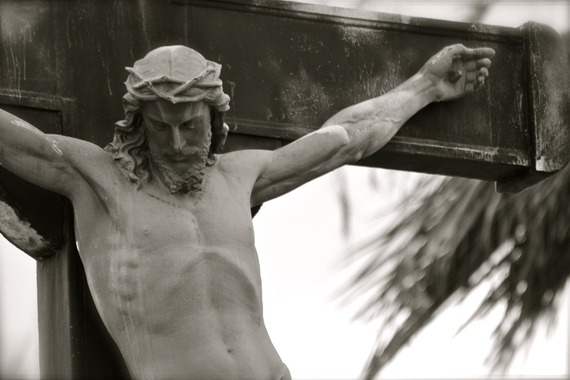 In the film I Origins, as a skeptical scientist reels from a series of supernatural experiences that defy everything he has lived and learned, his wife puts a scientific spin on the subject.

"If I drop this phone a thousand times, a million times," she says. "And one time, it doesn't fall--just once, it hovers in the air--that is an error that's worth looking at."

And that is how it begins, this "call" to conversion.

Something that can't happen, does. Once. Then twice. Then lots of times. So many times that you stop being able to ignore them or explain them away.

And they're not random, these inexplicable events. They answer big questions. Solve big mysteries. Fix big things, that's you'd given up trying to work out long ago.

Sometimes it's a playful nudge: a song on the radio, a snippet of conversation you hear in passing that contains the answer to everything.

But sometimes, it's a bitch slap, a serious shove--the proverbial burning bush. "Something" is messing with your mind. Deliberately, systematically showing you who's Boss.

After one particularly unsettling "event," I remember saying, out loud, "Oh, man, please don't do this to me." I didn't want to be "crazy." I liked my life. Or I thought I did. I didn't need these changes.

But the "hits" just kept on coming. And I soon noticed a very interesting pattern.

The more I surrendered to what I was seeing and feeling, the more fascinating and fulfilling life became. It was like putting on a pair of those sunglasses you see on TV, the ones that are supposed to bring the whole world into sharper focus. I marveled at all I'd been missing.

If I said, "Yes," to whatever was happening, I could have anything I wanted. If it was worth wanting. Only, the things I wanted changed, too. I wanted to spend a lot less time on what I wanted, and to find more ways to help other people--even total strangers--get what they wanted. Needed.

And like that movie scientist, I was also deeply troubled by all this. Because when I tried to explain it to people, I got two disheartening reactions: the patient, patronizing smile or the incredulous and equally patronizing glare, followed quickly by a terse verbal dismissal.

And I couldn't fight back. I felt the same way. This just couldn't be happening. "I'm too cool for this," my ego whined.

But another voice said, "This is too cool to miss." And it won, that other voice. The "still, small voice" you read about in those woo woo self-help books.

So I turned to something I remembered from years past. An online retreat, on the Creighton University Web site that my best friend and I had worked through together.

I knew nothing about Creighton or the source of the daily "exercises," at that time. I just liked how Deepak Chopra they were.

But this time, I explored the site more thoroughly, and discovered they were based on "Ignatian Spirituality." St. Ignatius, the Jesuit--Pope Francis is a Jesuit. And I love me some Pope Francis.

So I did some serious surfing. And I was stunned. All the religions and philosophies I'd dabbled in as a 60s kid, fit. The Hopi world view I'd been immersed in as wife of a tribe member, fit. All the myriad terms for "God" that I'd used to keep from saying "God" fit, too.

Deeply intrigued, I signed on for an "adult education" class at St. Mark, a beautiful Catholic church 'way out in the desert, not too far from my house. I'd been invited along for Christmas Mass there once, and never got over the big fountain just behind the pews that greets you with such a soothing sound as you enter.

I'd felt comfy and calm there. Wanted to stay and sit, when mass was over. That was new.

I grew up in a Baptist home. Fire and brimstone. Lots of "thou shalt not." Angry God, ours was. I couldn't wait to get away from Him on Sundays. He was a "Him" for sure, in our house. And He didn't play.

So I expected lectures. Preaching. Rules--lots of rules. Didn't happen. We sat in circles. Socratic circles, answering challenging questions to help us find our own answers in things we read and said.

The books of the Bible that my mother had force fed me as a child began to make sense, in historical context. The repetitions and contradictions--there were reasons for that. And more answers, in those stories. Oddly logical answers. Coded answers. To everything.

But most of all, I found the source of all the "craziness." That's just how Spirit rolls. There's a time of "miracles," to get your attention. You're being asked to say, "Yes." Like Mary. Like all those poor people who were so sorely tested in the passages we read.

"Yes," to what? Saint Teresa of Avila once wrote that, "Christ has no body now but yours."

And that's what the little nudges are for. That still small voice is The Voice. Saying, "Jesus has left the building. It's your turn now."

So, on the evening before Easter, I'll be baptized, in a lacy white dress with my daughter and all my closest friends looking on. Some remain skeptical or even vehemently opposed. "The Church" is the problem. The sex scandals, the brutal chapters of its history.

"...if you're down on love, or don't believe
This ain't for you
And if you got it deep in your heart
And deep down you know that it's true
Well, let me see you put your hands up..."