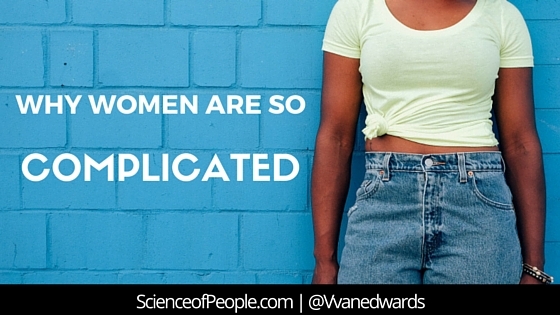 Women can sometimes be unpredictable.

Even as a woman, I regularly don't understand the choices of my female friends, mother (love you) and sisters (love you lots!).

But guess what? I have a little window into the odd world of women for you. Want a fascinating peek into human behavior-especially women's often baffling choices? I am mildly obsessed with the show Dating in the Dark. In this show, 3 men and 3 women show up to a house and 'date' each other in a completely dark room. It basically takes looks out of the equation and forces the singles to choose their partner based on personality alone. They go on group dates and one-on-one dates and in the end they 'reveal' their physical appearance. Then, they can choose whether or not they want to continue dating after they have seen the person. It's pretty great / trashy TV.

Here's why it's helpful for us:

Many of our dating students know about my obsession with the show and one of our awesome readers (thank you Wouter Cox!) sent me an episode of Dating in the Dark that is a behavior Gold Mine!

Here is the full episode:

Let's take a look at the particularly interesting female behaviors in this episode.

#1: Women Do the Opposite of What they Say

Did you catch it? I actually laughed out loud after the initial group date. Why? In the beginning of the episode, all three women say they like a man with a sense of humor. In fact, 2 of them say it is the most important thing to them. Then, two of the men focus on being funny during the group date-make the women laugh and have a grand ol' time. But guess what? The women leave the first group date and PUNISH the men for being funny. They are like, 'oh they just weren't taking it seriously' and 'they were so focused on jokes.' And so ALL THREE PICK THE ONE UN-FUNNY GUY.

What the what? Women are terrible! They said they wanted funny, got funny and then rejected them for being funny.

It's madness-no wonder men go crazy trying to date us!

But to be real, I can so relate. If I am being honest, I think women do this all the time. Just the other day, I asked my husband to try to take more initiative to get himself healthy breakfast in the morning and then when he did, I got mad at him because I had made him breakfast and it was waiting in the fridge. Oops. Even I realized how confusing it was. I often wish he could just read my mind.

Ask most women what they are looking for in a relationship and they will tell you:

You know what they don't say? Social proof. But guess what? That's what actually works. My favorite part of this episode was when the producers showed all 6 daters clips of their friends talking about them. One of the men (brilliant) chose to have his female friend recommend him. The girls ate it up. ALL THREE CHOSE HIM. That almost never happens on the show. Why? Social proof is a powerful persuasion tool.

#3: Women Pick the Same Men Over and Over Again

I thought it was very amusing when during the early part of the show, Adele says something like, "I usually like assholes, but I am trying not to do that now." Then what does she immediately do? Pick the asshole. In my opinion, David was the biggest jerk on the show and of course, she chose him. Why? We are sticklers for habit. As humans, we tend to be attracted to the same kinds of people over and over again-even if they look different, we like to have personality fits based on our genetics, history and spot in life. Typically, we pick people who fill an emotional need. Why Adele gravitates towards 'assholes' in her own words? Only she could tell us-or maybe she couldn't. We are terrible at recognizing our own patterns. My guess is that somehow they make her feel like the good girl. I won't psychoanalyze her right now, but I do challenge you to think about this:

For me, my husband is a rock. He is super calm, super stable and I love that about him. He grounds me and me frenetic, constant energy.

Take a look at the date with Adele and Ben at 15:00. Man, oh man, this is the perfect example of what the body does when it is attracted to someone. Adele ends up choosing Ben, and you can predict that just by watching this date. Remember, they hadn't even seen each other yet, but you can already tell they are super into each other. Typical attraction cues you can see here:

When you take the physical out of the first impression, it really messes things up. No one picked right in the beginning. That's because we need nonverbal and physical cues to truly gauge if someone could be a good match. This is why if you are online dating or using a dating app, I highly recommend meeting in person-even if only for a few minutes-as fast as possible. You can spend months chatting, talking and interacting and know within a few seconds if you could really be with someone. Body language says so much.

Do you want to examine more episodes? We look at a ton of Dating in the Dark episodes in our course the Body Language of Love and Dating.