A workforce agency in central Florida has ended a campaign to give superhero capes to the unemployed. Since its launch last week, the "Cape-A-Bility Challenge" faced intense media skepticism and an investigation from the statewide Agency for Workforce Innovation, which apparently considered the program a bit too innovative.

In a Wednesday press release, Workforce Central Florida, which has multiple offices in and around Orlando, announced that it has "listened to the public" and will withdraw it's "admittedly out-of-the-box creative campaign."

"Even though it seemed to offend some, it was the farthest thing from our intention which was to introduce our programs and services to job seekers and employers who need them," the release said. "The decision was made today by our board leadership team in concern that the campaign may have been a little too out-of-the-box and missed the mark with such a broad audience."

The Associated Press reported that the job center spent more than $14,000 on 6,000 red capes as part of the campaign, which encouraged the unemployed to vanquish "Dr. Evil Unemployment," a cartoon villain brandishing a pink slip.

The campaign included several photos, a comic strip, and a video on the central Florida agency's website.

The agency said the program had not been all bad news: "Fortunately, we’ve achieved some success in the short week-and-a-half the campaign has run, including new job postings online, new job candidates registered for services and an increase in usage of our website," the release said.

Here's a picture of the supervillain facing off with a Florida worker: 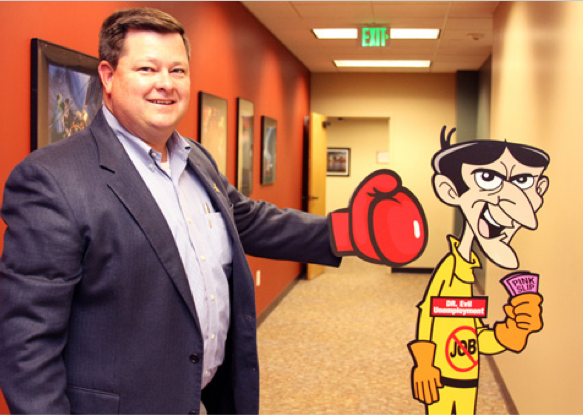 HuffPost readers: Did you, or did someone you know, participate in the Cape-A-Bility Challenge? PLEASE tell us about it -- email arthur@huffingtonpost.com.