The generation that came of age during the Great Recession is still having trouble becoming financially independent and moving away from home, according to a report by the Pew Research Center using recent Census Bureau data.

Only about a third of U.S. adults between the ages of 18 and 32 lived on their own as of March 2013, according to the analysis. That figure is roughly flat since March 2012. The percentage of young Americans who head their own households is actually slightly lower than it was in 2009, at the peak of recession.

With fewer and fewer young people setting up house, many in this struggling generation still live with their parents. Thirty-four percent of Americans aged 18 to 32 lived at home this year, down only slightly from 35 percent in 2012 and up from 32 percent in 2009.

The remaining third of young adults find themselves somewhere in between; they are living with a roommate, partner or spouse while not owning the home or having their name on the lease.

A sluggish job market for young people is one of the main reasons so many are incapable of leaving the nest. Nearly 15 percent of Americans between 18 and 24 are currently not in school or working, according to a separate study from The Opportunity Nation coalition released Monday.

Here's a closer look at the Pew Research Center's numbers: 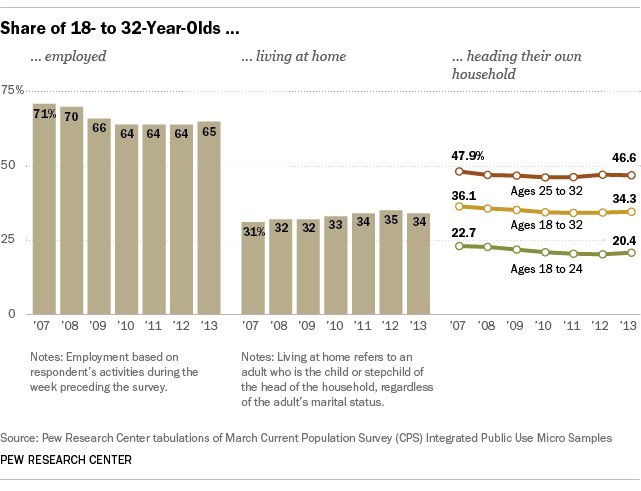 Pew's report is just the latest evidence of the financial challenges facing young Americans. The median earnings of households headed by Americans under age 25 fell by 1.6 percent in 2012, and more than 20 percent of 18-to-24-year-olds lived in poverty that year, according to the Wall Street Journal.

It's not just American youth struggling to recover from the recession and its aftermath. Worldwide, roughly 75 million workers under the age of 25 were unemployed last year. In Spain, for example, nearly 40 percent of Spaniards under 35 still live at home, according to Eurostat data.