If you spent 30 years trying to accomplish one thing, what kinds of results would you need to keep you going?

When it comes to mastering a skill, a few decades might sound like more than enough time to reach your goal, especially if you adhere to the words of Malcolm Gladwell, who, in the book Outliers, explains that it takes roughly 10,000 hours of practice to achieve mastery in a field. But when it comes to the task of fighting injustice, the road to success is much longer and harder fought.

Since 1985, the Guerrilla Girls have been raising a much-needed ruckus over gender and racial inequality in the art world, under the leadership of seven anonymous, masked women. For over 30 years, they've publicly condemned museums that fail to collect or showcase women artists and artists of color, using facts, humor and "outrageous visuals." After decades of work, they show no signs of stopping.

Why? Because women are still severely underrepresented in galleries and museums. Recent stats reflect the dismal state of gender parity in the art world: In 2013, every artist in the top 100 auction sales was a man. In 2014, there were no women in the top 40. In 2015, only five of 34 art galleries surveyed by the feminist art collective Pussy Galore boasted rosters in which women constituted more than 50 percent.

In other corners of popular culture, diversity is at the front and center of conversations today. #OscarsSoWhite raised awareness of the white-centric nature of the Academy Awards and Hollywood at large. In the literary world, there are both organized efforts to combat gender and racial inequality in publishing, and individual acts of protest. Despite a statistical lack of progress in the art world, the Guerrilla Girls continue to advocate for more diverse representation in arts institutions with the hope that change is on the horizon.

Straddling the line between artist and activist, the New York-based Guerrilla Girls use pseudonymous names inspired by women artists who came before them and, in public, wear gorilla masks at all times. They favor anonymity in order to focus attention on the issues they're fighting for -- the severe lack of women represented in major art institutions -- and not their individual personalities. Together, as masked avengers, they produce everything from posters to billboards to stickers to expose sexism and racism in politics, the art world, film and culture around the world.

While many of their unsanctioned protests have been directed at arts institutions, like the Metropolitan Museum of Art, the Istanbul Modern and the Fundación Bilbao Arte Fundazioa, that doesn’t mean they're not willing to work with museums too. Earlier this year, the Walker Art Center, which started collecting the Guerrilla Girls’ work early on, opened an exhibit of 88 posters created by the women between 1985 and 2012.

In fact, in celebration of the Guerrilla Girls’ 30th anniversary, over 30 arts and cultural organizations in Minneapolis, Minn., and its surrounding cities will be collaborating with the collective for the Guerrilla Girls Twin Cities Takeover, an eight-week period that includes over 50 exhibitions, discussions, performances and special events.

The exhibition and accompanying takeover highlight the fact that the Guerrilla Girls are as active as ever. Soon after they landed in Minneapolis, we spoke to Kollwitz and fellow Guerrilla Girl Frida Kahlo about what museums, feminists, artists and everyone in between can do to help make the takeover successful -- and ensure that people and institutions outside of the Twin Cities are fighting for gender equality alongside them.

Read on for a guide to how we can collectively create an art history that reflects all of us.

What Individuals Can Do

“Complain, complain, complain,” Kahlo explained to HuffPost. This can take on many forms, but mostly it involves recognizing a problem, whether it’s sexism in the workplace or underrepresentation of women in films, and using your voice to address it. As the Guerrilla Girls have shown us, you can do so without giving away your identity or putting yourself at risk.

“Sometimes it really works to do little things anonymously," Kollwitz added. "A little guerrilla action can have a big impact." Here's your individual guide to achieving that impact:

1. Question popular culture. This initial activist gesture happens on a more cerebral level than an external one, but it's just as important. “People just accept culture as what’s presented to them,” Kahlo notes. “You should try to examine it, develop an opinion and not just accept what’s fed to you as high art.”

2. Stickers aren’t just for kids. The Guerrilla Girls have a long history of using anonymous public displays, small and large, to call out discrimination and inequality. Printable stickers are available on their website, from “Anti-Hollywood Stickers” for the Oscars to their legendary, scathing billboard image, “Do women have to be naked to get into the Met. Museum?” Need a way to simply start advocating? Why not begin here.

3. Embrace social media to spread your message -- and make it last longer. Since the rise of Internet culture, the Guerrilla Girls have embraced social media as a new tool for protesting. “In the past, our posters would get covered up in a few minutes, but now, all of our work has a life digitally, on social media and on the Internet, so we consider that an equally important part of the work,” said Kollwitz. You can tag the Guerrilla Girls’ Instagram and use one of their favorite hashtags, #30yearsandstillcounting, to express your own frustration with arts institutions.

What Museums Can Do

Some museums, such as the Tate Modern and the Moderna in Sweden, have established mandates for diverse representation throughout their exhibitions and collections. Of course, the Guerrilla Girls emphasize that these efforts only came about thanks to an outcry from artists and the public.

“There are curators and sometimes directors at every museum who care about these issues and are working quietly behind the scenes, or more outwardly, and slowly things are changing,” Kollwitz explained. “But museums move at a glacial pace, which is why we have to keep up the pressure. It doesn’t just happen because of the zeitgeist.”

Beyond listening and responding to the complaints and concerns of the public, here’s what people who work in museums can do:

1. Avoid tokenism. When it comes to diversity, the Guerrilla Girls have witnessed a transition from outright institutional prejudice (with white males dominating museum collections and gallery walls) to the issue of tokenism. “Museums think that if they show one woman artist or one artist of color, the problem is solved,” Kahlo said, “but that’s a continuation of the problem.”

The Guerrilla Girls advise that while progress can happen in small strides, the larger goal of gender equality will not be achieved in token instances.

2. Admit your failings. In an admirable move during the Twin Cities Takeover, one museum, the Minnesota Institute of Art, voluntarily opened itself up to criticism by the Guerrilla Girls, asking them to evaluate their collection. A video of the collective’s findings were projected on the museum’s own walls. One fact is particularly disappointing: “Only 8 of 415 paintings and sculptures in the European and American galleries (1400-1960) are by women.”

Realizing and acknowledging the problem is the first step in righting these wrongs for this museum and many others.

3. Don’t let wealthy collectors influence the art you collect and exhibit. When you look at the root cause of museums’ narrow collections, you’ll see a glaring conflict of interest. According to Kahlo, a board of trustees at a museum should not be comprised of wealthy collectors with a vested financial interest in the selection of artworks at a museum. As the Guerrilla Girls have pointed out, this has happened in the case of Eli Broad, whose Broad Foundation collection is 96 percent white and 83 percent male.

A more thorough code of ethics for museums can be found here.

What Other Organizations Can Do

According to the Guerrilla Girls, if you’re interested in activism, one of the best things you could do is to join together, whether that means forming a collective of your own or working with other organizations. You can see this spirit of collaboration and camaraderie in the Twin Cities Takeover, which lasts from January to March 2016 and will include over 20 arts and cultural organizations (from small non-profits to major cultural institutions) in Minneapolis/St. Paul and surrounding cities.

Here's how to keep the spirit of collaboration alive:

1. Don’t let ego keep you from collaborating with other like-minded organizations and individuals. “What I love about the takeover is that so much of it isn’t about us,” Kollwitz concluded. “It’s people -- students, artists, activists -- coming together to do things as well. They aren’t joining us, they’re joining forces with us.”

2. It’s okay to have a focus. Don’t expect yourself to tackle everything. While the Guerrilla Girls' activism keeps in mind the systemic problems inherent in the realms outside of art, they've chosen to focus on the world they know best. “We are always expanding our reach, but we love criticizing the art world because it’s symptomatic of what’s wrong with society and our country,” Kahlo added. “We haven’t done everything, because we’re human. I look forward to doing what we haven’t done and seeing others do what we haven’t done.”

3. Stay nimble and welcome new ways of doing things. “The world needs more masked feminist activists than the Guerrilla Girls," Kahlo said. "Which will be more powerful. We have our specialization and way of doing things, and it’s not the only way. There are many unexplored avenues we’d love to be able to instigate."

The Guerrilla Girls are also quick to point out that their conception of feminism is not just about women. “There are so many people who stand up for feminism and are slowly changing the world, giving women lives their grandmothers couldn’t have had,” said Kollwitz.

According to Kahlo, “Breaking down the patriarchy is about gender equality across the board, the end of stereotypes, and the end of privileging one gender over another.”

“Our feminism has always been intersectional," Kollwitz reiterated, "we really believe that no one is free until everyone is free.”

When they put it that way, it’s easy to see why the Guerrilla Girls are still fighting 30 years later, inspiring younger generations of women and men to join their cause. Now, if you’ll excuse us, we have some posters to print out. 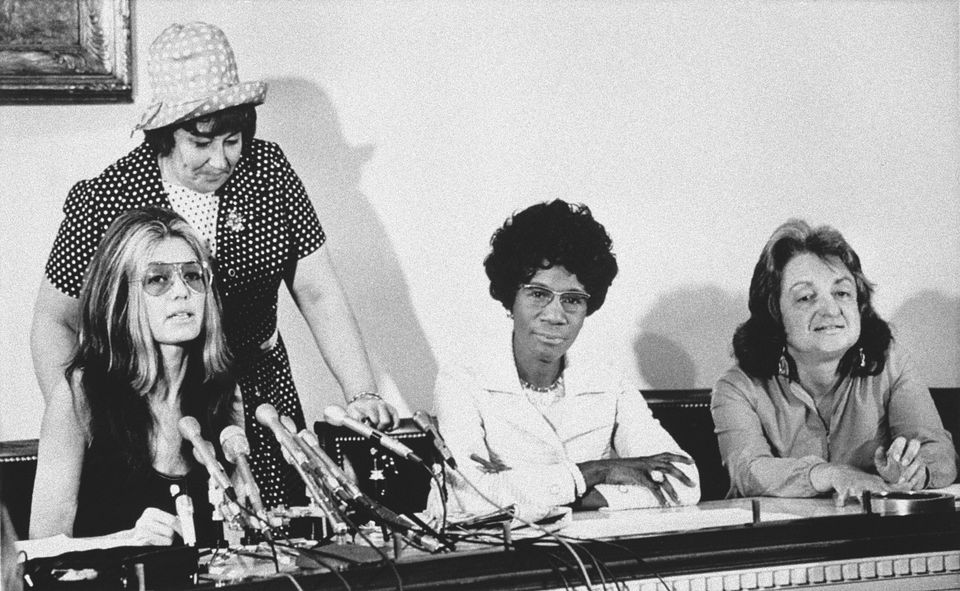 1 / 27
Members of the National Women's Political Caucus tell a Washington news conference on July 12, 1971 one of their goals is that women comprise half of the delegates to the 1972 presidential conventions. Seated from left: Gloria Steinem, member of the Democratic National Policy Council; Rep. Shirley Chisholm, D-N.Y.; and Betty Friedan, women's rights advocate. Standing is Rep. Bella Abzug, D-N.Y.
Charles Gorry/AP