A year ago I hosted my first Living Room Conversation, the topic was youth voting-- more specifically why youth choose to register or not. One year later I chose to revisit this subject with the added implication of the upcoming presidential election. I sat down this time with Robin Blades, my closest childhood friend. We had recently gone on a long trip together and our disagreement within politics was a subject that came up on numerous occasions. We both have a sensation of fear and sadness with the current state of our country and the world and are choosing to act in different ways as a consequence. She is supporting Hillary Clinton as the lesser-of two evils and in our opinion the only mildly sane candidate. I however, am struggling deeply with Clinton's hawkish nature and racist tendencies, it is possible that I will not vote in the upcoming election. This contention brought us together to sit down with some of our peers and try to delve into these issues and resolve some of the animosity we were feeling regarding the subject.

We were joined by three of Robin's friends: one a fellow UCLA undergrad and Clinton supporter and the others international students from Lebanon who are both undecided. I brought my brother who participated in the first Living Room Conversation I hosted addressing youth voting. He first participated as a non-registered voter and was inspired by the first conversation to change that. Although he initially lost the drive to register last year, the Bernie Sander's campaign gave him the desire to register finally at the age of 21.

Following the structure of the LRC we started by talking about what drew us to the conversation. As was my experience last year hosting this with my peers most everyone replied that it was just the fact that they were asked to come by Robin or myself and they were curious to discover what it was all about. In round two we were all drawn to address the question: "What most concerns you about your community and/or the country right now and long-term?" This structured all of the proceedings in the most meaningful way. My brother said that right now he was concerned with safety in our hometown of Berkeley and the wider Bay Area/ country at large. When the conversation took place there had been four deaths of students from our high school in the previous two weeks-- each by separate shootings. Two of these people were people he knew and the events where the shootings occurred were places he wanted to go to but did not out of legitimate fear. The fact that there is so much violence in the world and death in his immediate circle was (for good reason) his biggest concern. I also expressed that my greatest concern was, at the root, violence. I have anxiety when my brother, a young African-American male is not at home everyday and increasingly so after dark and into the hours of the night. Further responses to the question also brought up the issue of violence both within the African- American community and internationally.

What we really found was that none of us felt that Clinton nor Trump would be effective at preventing violence. Trump we thought would be ineffective both domestically and internationally and Clinton we felt would be especially ineffective internationally. We talked about this at length and what we agreed on in the end was that we don't connect to these candidates because they don't seem to promise any kind of safety for our communities. What we all focused on then was the need for stronger participation in local politics. We all realized that our knowledge of local candidates was far less than that of the nationwide presidential campaigns. We left the conversation with a greater desire to find and get involved in politics at our college institutions and local levels.

At this time when so many of us young people feel defeated about our current political options I think what we discovered is that connecting to each other to discover the similarities in our defeatedness is crucial. If we can identify what we can do to promote what our vision of "good" is for our communities, country, and the world then we are one step closer to discovering methods for cultivating this hopeful change. For us the similarity lay in the fear of violence and the lack of effect we feel the presidential candidates will have in both acting non-violently and stopping current violent acts from continuing. We all hope to support each other in finding information about how we can effect change locally to both reduce our fear and take political action to move us in the direction to be the kind of country we want to live in. 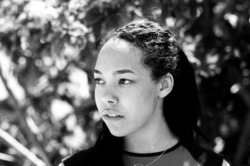 Serena Witherspoon is currently a student at Berkeley City College. She majors in Sociology and is especially interested in critical sociology and the social-conflict theory. She is currently interning with Living Room Conversations in hopes of raising awareness about youth voting and learning about politics. Her other passions include music, dance and visual art.