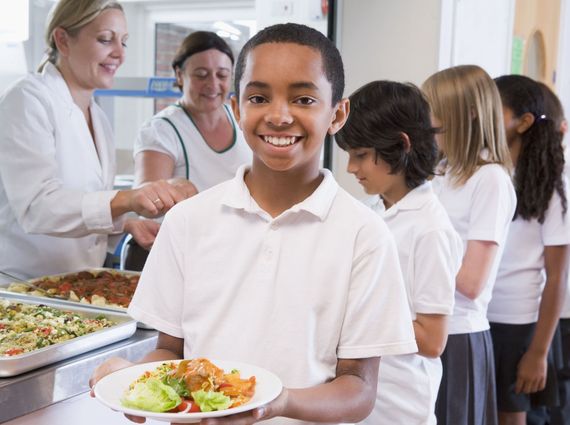 Congress is attempting to allow food industry interests to trump the health of people and the planet through the back door approach of the budget process. Both the House and Senate Appropriations Agriculture Subcommittees recently approved bills that threaten two critical science-based policies: federal school meals programs and the Dietary Guidelines for Americans.

Placing industry concerns above children's health, this Congress is undermining the 2010 bi-partisan Healthy Hunger-Free Kids Act by proposing to roll back updated science-based standards for the nutritional content of school meals, specifically limits on sodium and requirements for whole grain-rich foods.

And in a new twist, the bill would also severely limit recommendations made by the Dietary Guidelines for Americans Advisory Committee. Proposed language in the bill would prevent the inclusion of new research on diet and exercise in the 2015 Dietary Guidelines for Americans (DGA). It would also stop the Guidelines from mentioning any link between a healthful diet and environmental sustainability, bowing to pressure from food industry players that feel threatened by this stance. .

Here are our top 10 reasons why Congress should stop using the appropriations process to meddle with science-based policy:

1. 95% of schools are already meeting the updated meal standards that the appropriations bill would roll back. For the 5% of schools still struggling because of unequal resources, USDA is committed to helping them succeed.

2. Federal nutrition standards for school meals are nothing new. Since the 1940s, the federal government has set standards for the nutritional content of school meals. The 2010 legislation simply brings these standards in line with new evidence on diet and health.

3. Despite what you may have heard, kids are NOT in danger of getting too little sodium. In fact, it's the opposite. 90% of children eat too much sodium, which is associated with higher blood pressure. There is strong evidence that supports sodium reduction for children as a way to reduce the risk of heart disease.

4. The foods kids like have already been reformulated to meet the updated whole grain standards. Items like pasta, tortillas, and pancakes are widely available to schools. Rural and urban school districts have found products that meet the 100% whole grain rich standards. Research shows kids like these products just as much as their refined grain counterparts.

5. There's nothing new about kids complaining about school lunch...or food in general! Generations of parents will agree that kids don't always jump for joy about eating broccoli, but that doesn't mean mom and dad pull out the ice cream and candy bars at the dinner table. School meals need to reinforce the lessons kids are getting about healthy eating at home, and support the majority of American parents who favor national standards for school meals, and 75% who think salt should be limited in meals.

6. Who do you trust for dietary advice - Congress or nutrition experts? The Dietary Guidelines Advisory Committee used the best available scientific methods in their 24-month process. Congressional intervention undermines the scientific basis of the recommendations.

8. The bill would gag the DGA from including the latest scientific evidence. The standard of evidence called for is unprecedented for the DGAs, and is inconsistent with standard practice in the scientific community. For example, they would not be able to include research showing the connection between eating more fruits and vegetables and less red meat and a reduced risk of obesity and type-2 diabetes.

9. The point of the DGA - issuing common sense advice about putting recommendations into action - would be undercut. Any new policy recommendations for implementing dietary or fitness recommendations - such as following dietary patterns that are higher in vegetables, fruits, and whole grains; include seafood and legumes; are moderate in dairy products and alcohol; are lower in meats; and are low in sugar-sweetened foods and beverages, and refined grains - would not be allowed by this requirement.

10. We can't afford to turn back the clock. With more than one third of American children and adolescents overweight or obese, one in three adults predicted to have diabetes in 2050, and our food security threatened by climate change, this is a time when consumers, companies, and policy makers would greatly benefit from the clear, science-based, common sense advice the DGAC highlights.

Lawmakers have the evidence to help our citizens eat healthfully and sustainably. Please join us in calling on Congress to maintain science-based policies that are in the interest of all Americans.

Send your message to Congress about not undermining the DGAs (thanks to our colleagues at the Center for Science in the Public Interest). Sign on to Food Policy Action's petition to tell Congress not to gut healthy school lunches.

The Laurie M. Tisch Center for Food, Education & Policy, Teachers College, Columbia University cultivates research about connections between a just, sustainable food system and healthy eating, and translates it into recommendations and resources for educators, policy makers, and community advocates. The Center focuses on schools as critical levers for learning and social change.