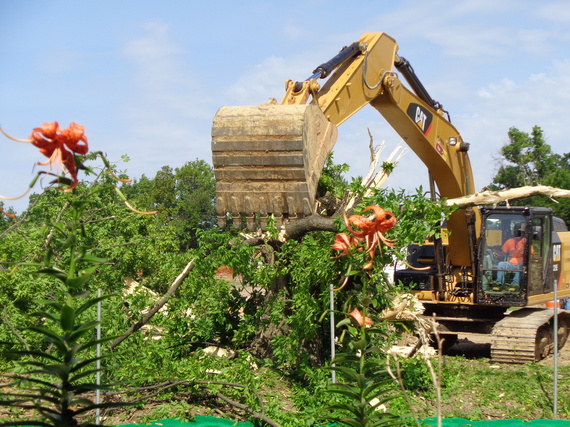 In 1982, Edward Hejtmanek settled into his new life in the Ozark hills, building a home for he and his family in the small collage town of Fayetteville Arkansas.

There, with the whistling cicadas and hot summer nights, he set down roots. 15 years ago, he built a woodshop and with his wife, opened a beloved folk art gallery in a small neighborhood in quiet south Fayetteville. Surrounded and supported by other small family-run businesses and a bustling local economy, Edward and his family thrived.

Thanks to people like Edward and his wife Anita, Fayetteville has quietly become a cultural center for makers, crafters, food growers, artists and tradespeople, people moving from bigger cities in persuit of cheaper land, smaller communities, and lives lived closer to the earth.

As the local economy grew in Northwest Arkansas over the last 20 years, The Walton Family Empire grew their business too, operating in a very different way. Walmart, which began in neighboring Bentonville, was quickly becoming one of the worlds highest grossing multi-national companies of all time.

The Walton Family and Walmart came with a business model which made them fast billionaires and starkly contrasted the earnest hard work and pride of Fayetteville's working class crafters and tradespeople..... Walmarts are conveniently located in strip malls, selling grossly inexpensive poorly made goods, and are employed by grossly underpaid folks.

This contrast has led to a growing tension between the hard-working small business people of Fayetteville, and the small town economic soul-crushing trajectory of the Walmart Takeover.

Today, to the chagrin of Edward and many more of Fayetteville's hard working citizens, yet another Walmart is being built smack dab in the middle of a lovely up-and-coming neighborhood full of thriving small business's. Too close for comfort to the hardworking heartbeat of the town, and too close for comfort to many other Walmarts within just a few miles in every direction. There are, according to google earth, what appear to be 10 Walmarts and a Sams Club in a 12 mile radius in and around Fayetteville. This, Edward laments, is simply too much.

In disbelief, Edward watched his town rally together at City Hall in opposition to the proposal to change zoning which would allow for this monstrosity of construction and corporate interest, only to see their local politicians shrug their shoulders and grant the zoning in favor of the project......Deep pockets and small town politics prevailed. The dirty deed was done, and ground has been broken for the construction of a brand new Walmart Neighborhood Market, right across the street from Edward's shop and gallery.

Edward Hejtmanek, environmentalist, radically peaceful small business owner and angry neighbor of South Fayetteville's new Walmart Neighborhood Market, wants you to prepare yourself and your town for the threat of a Walmart takeover by considering these 10 questions.

10 Things to Consider When Walmart Attempts to Take Over Your Town.

2. Who will pay the taxes that Wal-Mart avoids through its recently exposed network of off shore tax havens?

3. As the second largest global employer, second only to the Chinese military, What are the global impacts on wage suppression?

4. Who pays the costs for the food stamps, healthcare and other subsidies for the workers who are not paid a living wage?

5. How many jobs are lost and right sized businesses close as a result of big box stores moving in to a neighborhood?

6. How much choice with respect to product variety is lost as a result of Wal-Mart's relentless drive to dominate local markets?

7.Are Wal-Mart's global supply chains sustainable as we struggle to curb carbon emissions in an attempt to avoid the most extreme effects of climate change?

8. What are the effects on livability and traffic congestion when these stores move in to a neighborhood?

9. Who will pay the costs of the infrastructure improvements necessary after these stores negatively impact traffic patterns?

10. Have Wal-Mart's past promotional campaigns emphasizing American made products been honest?

What can be learned from Edward's experience? We can re-empower ourselves and work to prevent corporate takeovers by organizing, networking, and finding creative solutions.

We can make positive and lasting changes by participating in local politics, considering the impact of the companies that we support via our dollars, understanding that our political process is perpetually swayed by big money, and realizing that it is our responsibility to speak out and talk amongst each other when we see these things happen in our towns. It is time to think outside the big-box.