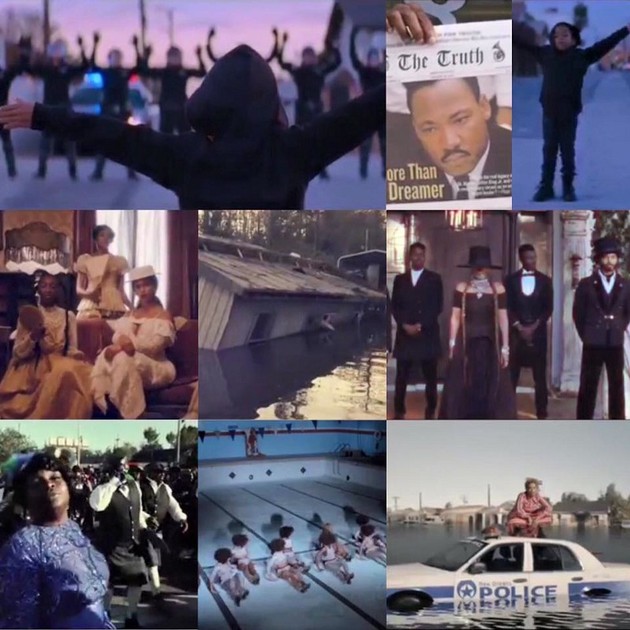 On Saturday Beyoncé released a single that spoke to us on so many levels. Which one are you on?

There are so many levels to Formation that those of us who felt it, really feel it. There really isn't (that) much to joke about. Or waste time hating on. This isn't really a song about designer labels and Red Lobster. (Although RL's Twitter manager picked up the ball and ran with it -- with 13K re-tweets on their first tweet reference to the song --well played.)

"Cheddar Bey Biscuits" has a nice ring to it, don't you think? #Formation @Beyonce pic.twitter.com/QzgVtYAKNo

Spoiling your man aside, lets take a deeper look. In case you missed it while you were busy being offended or offending her. Here's a break down -- thanks Bey:

The video opens with a New Orleans Police Car submerged in deep NOLA flood waters...the stage is set. Hurricane Katrina aftermath. The voice over says, "What happened after New Orleans?" -- the voice? Messy Mya, a controversial African American social media celeb/comedian from New Orleans who was shot down in the street. A video of the murderer confessing surfaced online, he was arrested, claimed he was bipolar, they put in a psych ward for 18 months and released him. He's since claimed he had nothing to do with the murder. Ahhh the taste of freedom.

Clips from a Sundance Documentary shows New Orleans disaster footage after Hurricane Katrina as well as a look at bounce music and the emergence of black gay rap in NOLA. The film and this video was a clear reminder of two things: that music unites us (across all genders and no matter how raunchy it's perceived by those who don't 'get it') and that Hurricane Katrina was real...and oh yeah...what DID happen in New Orleans? p.s. a final note worth mentioning here for those who still think Bey just exploited NOLA in this song instead of helping --she and former band mate from Destiny's Child, Kelly Rowland, started a charity called the Survivor Foundation. They started providing aid in 2005 and transitional housing in Houston for Hurricane Katrina victims and evacuees in 2007.

"I like my baby hair, with baby hair and afros. I like my negro nose with Jackson Five nostrils" -- this of course addresses the culture of open social hate and bullying towards girls like her daughter who stands proudly in her beautiful afro, and her husband, Jay, both of whom are often childishly mocked for their physical appearances. (Fellas -- no need to get your nose done like Michael Jackson. Queens love you just the way you are.) Loving your beautiful black self is an ongoing theme in Formation. Throughout the video Beyoncé rocks a number of black hair styles including her own natural afro. That may not mean much to you if you don't have black hair, but know -- it's a struggle. Especially for little girls.

The clothing worn in these scenes represent a time before and after slaves were freed around the 1900s. White corsets, binding the women -- during a time when slaves were technically "free" but still being oppressed. The black attire scene depicts a more empowered and free people, with the men dressed up in nice suits and Beyoncé adorned in jewelry and blatantly flicking off the camera in front of a plantation.

Church. Hair salon. Lobster. Culture. Period. Let's not get into all that. If you get it, you get it. If not, no worries. Just bounce.

A man holding up a newspaper is briefly seen. On the cover? Martin Luther King Jr., with the words: "The Truth - More Than a Dreamer". At this point, we are definitely in deep. Not just in flood waters. This is a history lesson living on in the present. This is modern day sh*t y'all.

There are several choreographed sequences of "ladies in formation" but one takes place at the bottom of an empty pool. Formation is first introduced at the beginning of the song in the form of family references, then women. We need each other during tough times. Especially when we're literally drowning. In water or in haters and "illuminati mess". Stick together. As ladies, as family, or as survivors under flood waters. We'll get through it together. ❤

"I twirl all my haters...Albino alligators" -- Ever seen the movie? With the police standoff? If so, you'll probably remember the reference to alligators using an albino among them as a sacrifice to distract opposing alligators, who then become prey. Bey is seen twirling an umbrella in her white corset here. Like an alligator death roll-- #slay. She sacrifices herself constantly to get the conversations going. Bravo haters. We all have our role.

There's a powerful scene of a little boy in a black hoodie break dancing in front of a line of police in riot gear. He stops dancing and puts his hands in the air. All the policemen put their arms in the air in response. Peace at last. A clip of graffiti on a wall comes across the screen that says, "Stop shooting us". It is what it is.

(p.s. - All this just days after Bey's husband announced a $1.5 million donation to Black Lives Matter and other social justice organizations.)

Then of course there's yesterday: Super Bowl 50. The day after Beyoncé released Formation, she performed it at 1/2 time of the big game: Broncos vs the Panthers. 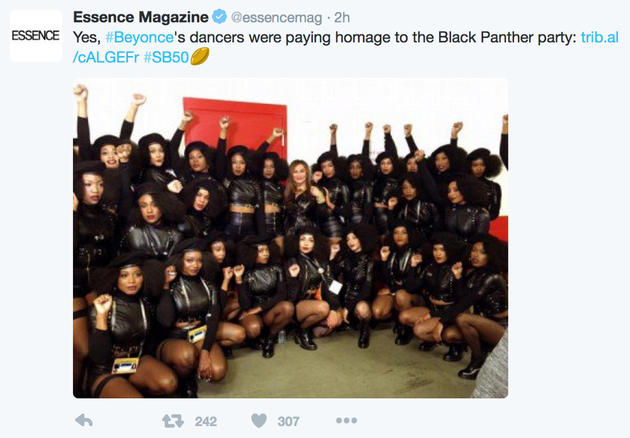 Her dancers were dressed in black panther gear -- as in the Black Panther Party who practiced militant self-defense of minority communities against the U.S. government. Forget Super Bowl 50. This year marks the 50th anniversary of the formation of the black panthers. Are you getting the picture now?

Subtle yet clear, not only was Bey, Bruno Mars and all their dancers decked out in black panther gear, she also paid homage to former friend and idol (R.I.P.), Michael Jackson. Her outfit was chosen as a tribute to what he wore during his Super Bowl performance of We Are the World in 1993. Remember how that song went?

We can't go on pretending day by day
That someone, somewhere will soon make a change
We are all a part of God's great big family
And the truth, you know,
Love is all we need..."

So what next? What do you do if you have the attention of about 114 million+ viewers? (At least that was how many people were watching the Super Bowl last year.) Well...if you're as smart as Beyoncé, you announce The Formation World Tour in a Super Bowl commercial that plays immediately after your half time performance. 2 days before tickets go on sale. That brings us to a whole other level on this playing field. Ladies -- time to #getinformation for tickets. ;)
There's a lot to learn from this entrepreneurial Texas bamma. But only if you get the message. Or...you can always sit on the sidelines and be a part of the negative conversations. Oh yeah, there's one last line Bey wrote about that too:

"You know you that *🐝* when you cause all this conversation.
Always stay gracious, best revenge is your paper."
Now excuse me while I go 'get it'. 💸