Salzburg: The home of 146,00 Austrians, and a stop-over for 3,000,000 tourists each year. That's a 1:200 ratio. It's like Cape Cod in August for Salzburgians all year round. People flock to the tiny city in the shadow of the Alps to walk the ancient streets, see the birthplace of Mozart (a charming yellow row house) and duck into the 1,000-year old abbeys and mountaintop fortress. Salzburians know where their bretzel is buttered, and they welcome the throngs with open arms. To get the most out of Salzburg, you have to let go of irony, let go of pretention, and embrace the adorably cheesy tourist attractions. 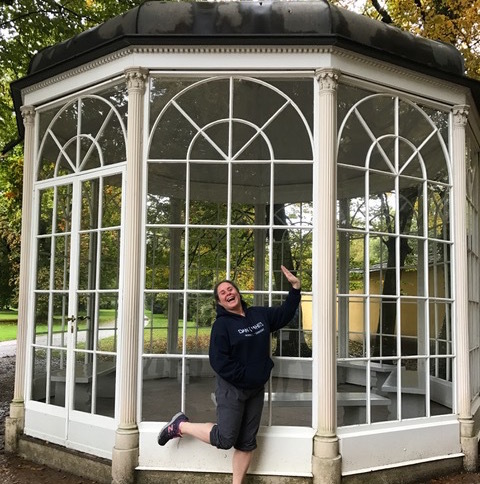 The Sound of Music Tour. Even if you don't like the most popular movie musical of all time, you will get sucked into giddy fangirl enthusiasm in this four-hour bus tour through key sites of the movie, including Captain von Trapp's castle, the abbey where Maria was such a problem, the gazebo where Lisle and Rolf declared their teen love, the lake where Maria and the kids capsized, the church were Maria and the Captain married, the bridge and gardens where they sang "Do-Re-Mi." Between stops, the guide played select songs on the bus PA system. Many of the tourists sang along. I found myself fighting back nostalgic tears. Something about those tunes, and Julie Andrews' voice, zoomed me right back to childhood, to innocence and silliness, stripping away my adult shield of cynicism. A deep emotional experience on The Sound of Music tour? Who knew such a thing could happen? 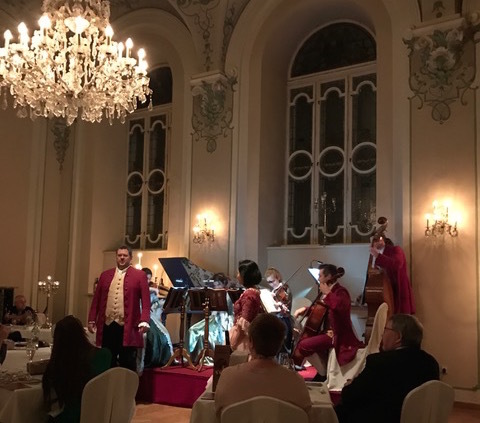 The Mozart Dinner. You notice very quickly that Mozart dominates the Salzburg experience. You'll find statues of him throughout town, the Mozart college for musicians, and the many opportunities to hear his music. My friends and I went to the St. Peter's Cathedral, built in 802 AD by Benedictine monks for an evening of fine dining and music in the city's oldest restaurant. Before the appetizer course, we listened to twenty minutes of Don Giovanni performed by a quite competent quintet and a pair of singers, a Japanese soprano and an Icelandic baritone, in period dress (although they draw the line at wearing powdered wigs). Next, selections from The Marriage of Figaro before the main course. Finally, before dessert, bouncy crowd pleasing sections of The Magic Flute. The food was good, but the setting--a baroque ballroom with angels flying around the ceiling and damask draperies--the singing and the pink champagne gave the evening its sparkle.

Mozartkugel or what we called "Mozart balls" are foil-covered chocolate candies. The centers are nuggets of pistachio marzipan, then a layer of nuggat, and then a generous dark chocolate dip. The Paul Furst family has been making Mozart balls since 1884, and the original shop in Salzburg's in cobblestoned Old City is still open, making and selling the Austrian bonbons today. 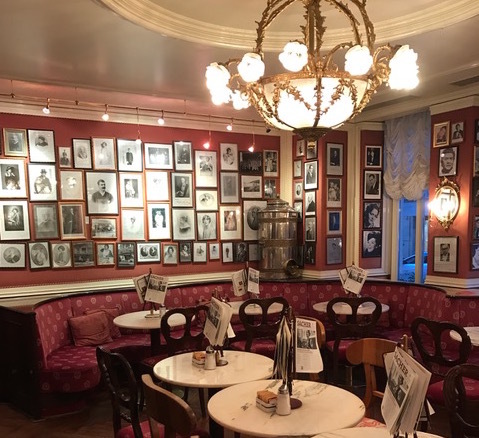 Hotel Sacher. We stayed in this five-star hotel, built in 1863, where visiting royalty, celebrites and heads of state stay in Salzburg, from Queen Elizabeth, to JFK, to John Lennon. Last year, the entire cast of The Sound of Music stayed there for the 50th Anniversary celebration of the movie's release (except Christopher Plummer; as rumour has it, he and Julie Andrews don't get along, and one hotel wasn't big enough for the two of them). The hotel might be most famous for its Sachertorte, a chocolate cake invented by confectioner Franz Sacher in 1832. I spoke to the hotel's pastry chef, who told me that the recipe couldn't be simpler: dark chocolate, eggs, sugar, flour, and the secret ingredient, apricot jam. I cried when I took my first bite--so much crying to Salzburg! What's with that? It might have been a case of second-generation nostalgia. My parents came to Salzburg forty years ago, and Sachertorte has been my father's favorite dessert ever since. Of course, I had to go to the hotel's bakery and buy a couple wood-boxed travel-friendly cakes for my father and my own family to bring the uncomplicated sweetness of Salzburg home with me.