The results of the eight-hour operation at Morriston Hospital in Wales have been “totally life changing," the 29-year-old told BBC News Wales.

Although Power was wearing a helmet at the time of the crash in 2012, he was left with broken cheekbones, shattered eye sockets, a broken nose and upper jaw, and a fractured skull, according to a hospital media release obtained by The Huffington Post. He was hospitalized for four months.

"I can't remember the accident -- I remember five minutes before and then waking up in the hospital a few months later," Power told BBC.

Doctors say this is the first surgery they’ve used 3D printing across all phases of a procedure. First, a surgical team took CT scans to create and print a symmetrical 3D model of Power's skull. Then, doctors printed out custom implants and guides to cut and reposition his bones.

“Without this advanced technology, it’s freehand. You have to guess where everything goes. The technology allows us to be far more precise and get a better result for the patient,” consultant maxillofacial surgeon Adrian Sugar said in a media release. 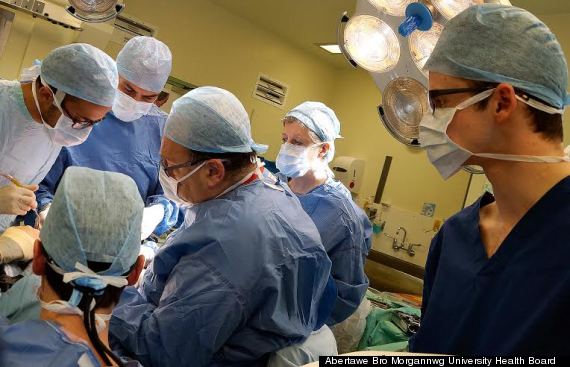 Doctors at Morriston Hospital in Wales perform the eight-hour-long operation.

The project began last year as a partnership between Morriston Hospital’s Maxillofacial Unit and the National Centre for Product Design and Development Research at Cardiff Metropolitan University.

Doctors have said the procedure's success has major implications for the future of 3D printing for surgical purposes. Sugar said the innovative technology will shave months of surgical planning and will hopefully be used on a routine basis going forward.

“Also, the more experience we get the cheaper we can do it as well. That’s a key because one of our aims is to make this something that is not just available to us with our expertise, but to any surgeon who finds themselves with this kind of problem,” Sugar said in a written statement.

Days before his surgery, Power said he was looking forward to not having to conceal his face with sunglasses while out in public.

As an April 2013 Wall Street Journal article notes, the use of 3D printers is expected to become more commonplace in hospitals. The report says that at least two 3D printer makers already "offer machines that can replicate human organs."