According to Tibetans, after death the consciousness takes at least 49 days to travel from one life to the next. Prayers conducted by the living can assist the dead through this journey and can help to guide them toward a good rebirth, and so it is a period that is always marked by special rites. Generally, groups of monks come to the house of the deceased and conduct complex prayer ceremonies that often last all day. The family members are also deeply involved in these activities, and the last day, the 49th, is particularly significant. By then, the family has had time to grieve, and through their active participation in the rites, can rest assured that they have done everything they can for the departed.

No matter what your belief system, it is brilliant psychology. I recently watched a Tibetan family go through this process after the death of an old man named Pasang -- one of the personal guards of the Dalai Lama, who escorted him out of Tibet in 1959. He died on March 8th from natural causes. The daughter took it very hard, but observed all the rituals to the letter. After the 49th day, she looked relieved, radiant, and completely at peace.

Early on the morning of April 28th, around 2,000 Tibetans gathered around the Dalai Lama in his temple in Dharamsala, India, to mark the 49th day of Tibetans killed in Tibet by Chinese police during the protests that began on March 10th. The number of Tibetans who died during the protests has been put at 154 by the Tibetan government, although China's state media puts the figure much lower. 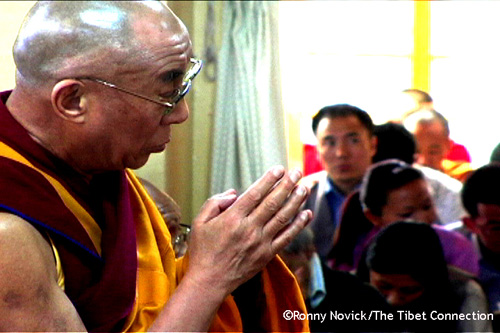 Next to the Dalai Lama sat the 23 year-old Karmapa, one of the highest teachers in Tibetan Buddhism, and the person who many suggest could be the next leader of the Tibetan people. Around them, about 300 monks and nuns formed another circle, and beyond that, lay Tibetans and a few curious Westerners. I thought how many of the older Tibetans present at the prayer ceremony must have had another 49 on their minds, remembering the 49 years of occupation by China and the mass public uprising by Tibetans in Lhasa.

A mountain of blessed food was distributed, or rather lobbed, into the crowd by monks from large milk crates. As packets of cookies and chips rained down on unsuspecting heads, people laughed and shouted, welcoming a bit of light relief in the gravity of the day.

A 28 year-old man named Jampa sat next to me, mouthing the prayers while earnestly turning his rosary in his hand. He told me that both his father and younger brother were currently in prison somewhere in Amdo Labrang in north-eastern Tibet, after having participated in the protests there. He had no idea about their well-being, and he hasn't spoken to his mother or sister for almost a month for fear of putting them in danger. "The Chinese police monitor phone calls," he said. "I can't call them directly. It's too dangerous. It was a sober reminder that these were not prayers for a people and place far way. This was personal.

Jampa expressed his concern that after the Beijing Olympic Games in August, the world will stop paying attention to Tibet, even though the problems there will remain. Just before we parted he looked at me searchingly. "Do you think the situation in Tibet will improve?" I was deeply moved by his question. I replied that I didn't know, but that I thought, like him, it depends on whether the world keeps caring.

"People in Tibet are really tired," he said. "Do you understand?" I thought I knew what he meant but pressed him further. "Tired of what?" I asked. "They are tired of life." Jampa pressed his hands firmly into mine before he left, and I watched him disappear into the crowd, still turning his rosary in his hand, one bead at a time.

Rebecca Novick is a writer and the Executive Producer of The Tibet Connection radio program. She is currently based in Dharamsala, India.