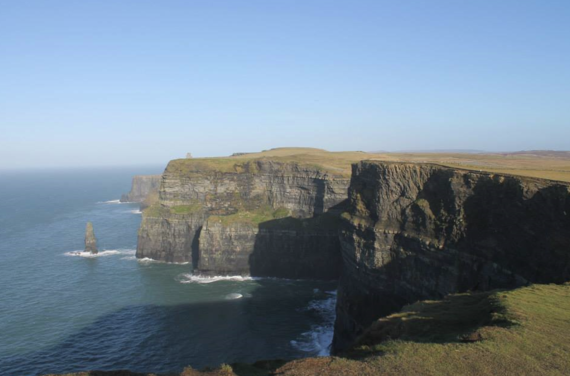 When planning a vacation during the winter months, Ireland is likely not the first place that comes to mind. With its reputation for being cold and rainy throughout the year, the winter seems like the least desirable time to visit. But there are a number of reasons why the beginning of the year can be a great time to visit the Emerald Isle. After a recent trip in the heart of January, we found the country's reputation as being an undesirable winter destination is completely overblown.

Here are just five reasons to head to this perennially green country during the colder months:

1. The welcoming, cozy pubs: After a day of sightseeing, picture settling down for a hot whiskey or a pint of Guinness next to a warm hearth in a pub filled with welcoming patrons, with live Irish music setting the scene. In Ireland's pubs, you'll find people of all ages, both tourists and locals, ready to share a pint and a story. What better time to experience this than on a chilly winter night?

2. It's not really that cold: Ireland boasts a moderate climate, so it very rarely sees extreme warm or cold. On our recent trip, we were met with warmer weather in Ireland than in New York City. Also (and we'll admit this might have been just a little luck of the Irish), it did not rain once in the five days we were there. Yes, Ireland can be a wet country, but it's that way all year, and you can hit a sunny spell -- as well as a wet spell -- any time. According to Frommer's, "Rain is the one constant in Irish weather, although a bit of sunshine is usually just around the corner." Snow is very rare in Ireland, but be warned, according to locals we spoke with, even an inch can shut the country down.

3. The off-season means great deals: Nonstop airfare to Ireland in the summer can cost upwards of $1000 for a flight out of New York City. We paid just more than $500 for our nonstop flight in January. (Think of all the Guinness that extra $500 can buy.) Hotel prices also average 25 percent -30 percent higher in summer.

4. Avoid the crowds: We were warned to get to many of Dublin's most famous attractions, including Trinity College and the Guinness Storehouse, as early as possible because lines can often be long. The morning we visited Trinity College to see the Book of Kells and the Long Room, we waited in line no longer than five minutes. And upon arriving in mid-afternoon at the Guinness Storehouse, we were told our wait would be no longer than 10 minutes. At the fabled Cliffs of Moher, we were able to hike along the breathtaking paths at the cliffs' edge without dodging hordes of other tourists, giving us the time and space to take in the views and snap photos at our leisure.

5. The main attractions are still open: Despite being warned by some online outlets that some of Ireland's tourist attractions would be closed in the winter, we weren't once turned away. From Christchurch Cathedral and Trinity College in Dublin to the Cliffs of Moher and the Burren in County Clare, we never faced a "closed" sign.

-- Jonathan Rougeot is a producer at Travelzoo and based in New York. Travelzoo has 250 deal experts from around the world who rigorously research, evaluate and test thousands of deals to find those with true value.