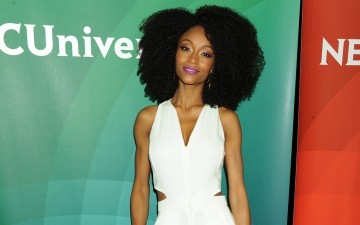 When we first met fresh-faced beauty Yaya DaCosta, who became the runner-up on Tyra Banks's America's Next Top Model back in 2004, it was clear then that it wasn't the last time we'd be seeing her long legs, lovely smile and fluffy Afro on small screens.

The Ivy League educated model and trained dancer had too many intriguing qualities not to turn that 15 minutes of fame into a long-lasting career. And that's exactly what she's done.

Today, with some 14 films later (including a scene-stealing performance in The Butler) and just as many television roles under her belt, Yaya is firmly planted as one of the bona fide sisters people love seeing represent on all screens, big and small. After a reoccurring role on the NBC drama Chicago Fire, she's been cast as a regular on the spin-off, Chicago Med, premiering November 17.

After an exclusive EBONY.com chat with the 32-year-old actress, here are five things you'll want to know about the inimitable Yaya DaCosta.

1. How she really feels about starring in Whitney might surprise you.

"I know what it is to lose a close family member, and out of respect for them, I tend to almost pretend that it didn't happen. It's not something that gets to be celebrated in the way that it would have had it happened maybe a little further in the future, or had this thing not happened to her beautiful daughter. I just feel for the [Houston] family, and my heart goes out to her. Every time someone comes up to me and says 'great job in Whitney,' like, I want to cry. It's such a conflict. But I will always be grateful for the opportunity, and it was wonderful having the experience of delving into that world."

"It feels real. When I go to the doctor or... I don't go to the police department, but in life, in these subcultures, in these worlds that are being portrayed on television, this is what people look like. So now what we're seeing isn't this arbitrary need to impose color into television as a statement. I think we're just reflecting what the world looks like, especially in these big cities. It's just real."

3. Her thoughts on the natural hair movement being accepted on mainstream television:

"You can't have a huge 'fro. I mean, you could. But on camera, I think it's less practical, and I'm working in the hospital, I'm going to have a ponytail 95% of the time. It's probably going to be a little tamer, looser curl, what I like to call the 'safe curl.' (laughs) But yes, that ability to embrace natural hair is wonderful. And I think it's, just again, reflecting reality. As the masses get a little more adventurous and appreciate what comes out of their head, out of their scalps naturally, that's being reflected on television. It used to be just commercials, and now it's actual real characters on television, and I think that's really powerful."

4. She's friends with ballerina Misty Copeland, and how she inspires her:

"I'm so proud of Misty. She knows how many women of color came before her, and the fact that she's receiving the recognition she is right now is a testament to that path as well as how hard she's worked. She deserves it more than anyone. She's so dedicated. I went to see her in Swan Lake, and one thing that was so amazing was, she was flawless. I've seen that before, and I felt while I was watching like it had never been danced before. That's how perfect she was. She's not coasting on anything. Not on how beautiful she is. Not on melanin, not on body shape. All of the things that set her apart are wonderful for people to notice, but she obviously blocks that out and focuses on her craft. She's, like, always training, always studying, always just trying to get better and better. And that's so inspiring for me. She's so stellar. I'm so grateful to be her friend."

5. How excited she is NOT to have a role with elaborate hair and make-up:

"I'm super excited about this [role]. I'm excited because it's an opportunity to have steady work on network television. It's a huge luxury for an actor, and hopefully it's a successful show that goes on and on, but I think it's such a great place to have landed. It's a character who's smart, that has a lot of heart, who can relate to people. She's strong and super loveable and she is in scrubs all day, so there's no fuss. There's no focusing on 'what to wear, do I look cute?' It's all human, it's all real, all organic, and I'm excited to be able to really act and focus on communicating the human condition without the distractions of hair and make-up and wardrobe. My scrubs are teal every day, keep it moving."