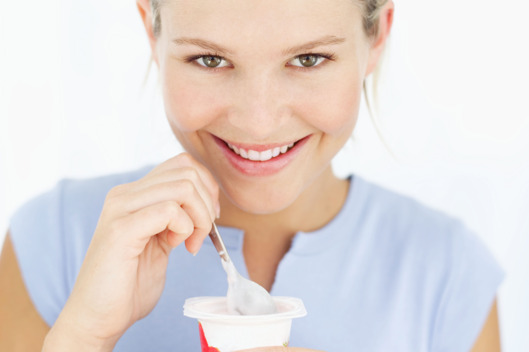 If these gendered commercials are to be believed, not only were were women easily tricked into thinking that a 100-calorie pack of sugary yogurt tasted exactly like an elaborate and decadent dessert (because women aren't allowed to actually eat dessert), they had simply gone mad with their love of the stuff. It was all but implied that off-camera, women everywhere were stripping down, slathering yogurt on their bodies, and praying to a Golden Calf created from empty Yoplait containers. "YO-GURT!" they chanted, a depraved and unstoppable mass. "100 calories per serving!" they shrieked into the moonlight.

And there were so many commercials.

Related: 19 Defining Moments in the History of Yogurt

Yoplait was one of the worst offenders. One of their earlier, long-running campaigns involved two women (one of whom was actress Leisha Hailey) commenting on the excellence of the yogurt they were eating by comparing it to various very good things that women supposedly love. For instance, during an exchange at a spa, they quizzically invoked Buddhism to call the yogurt "Zen wrapped in karma dipped in chocolate good." They eventually agree that it's "getting a foot massage while shoe-shopping for chocolate-covered heels good," and then they laugh and laugh in their plush robes.

When Yoplait Light started churning out new flavors, they set up a situation in which a woman was talking to her friend about her diet on the phone, as two women do (there needs to be a spinoff of the Bechdel Test exclusively for yogurt commercials). Her diet was going great, she assured the person on the other side of the line, because she was stuffing her face with apple turnovers, Boston cream pie, white-chocolate strawberries, and key lime pie. Her eavesdropping husband ransacks the house in search of these hidden desserts, but alas, it was all just yogurt, yogurt, and more yogurt. Ack!

Related: This Video About Working Women Is Great If You Pretend It's Not About Selling Yogurt

Women at the workplace were not immune from yogurt's stronghold either. Another Yoplait Light commercial featured a woman staring longingly at the near-whole raspberry cheesecake in her work fridge and calculating the calorie-burning effort she'd have to put in if she ate a slice. As she's doing her mental gymnastics, her colleague pushes into the fridge and exclaims, "Raspberry cheesecake! I've been thinking about this all day." Surprise! Her perky asshole of a co-worker is not referring to the real raspberry cheesecake, but to the raspberry-cheesecake yogurt she has stored next to it. The first woman tells the terrible woman, "You've lost weight," because "yogurt will make you thin and being thin is good" is the most important not-so-subliminal takeaway in every yogurt commercial.

A mainstay of these yogurt commercials is the side-by-side dessert comparison, in which dessert is very clearly presented as an evil temptress and yogurt all that is good and fermented and holy. When a woman opens her fridge to find a slice of chocolate cake, she reaches for a Dannon Light & Fit yogurt with a thin coating of chocolate at the top -- but doesn't take it out of the fridge before TAUNTING THE SLICE OF CAKE WITH HER YOGURT CONTAINER. "Take that!" she seems to say to the cake. "Linda, you've lost your damn mind. I'm a cake," the cake probably said back.

Another woman, tempted by her co-worker snacking on cookies, settles for a Dannon Light & Fit strawberry-cheesecake Greek yogurt instead. She waves her spoon and hexes her co-worker, shrinking his cookies. Later in the commercial, she runs into another woman in her office eating the same yogurt. Her colleague waves her yogurt spoon too, magically shrinking a doughnut another male co-worker is eating and then the two women laugh knowingly at each other, imbued with the dark and ancient power of yogurt.

But yogurt's influence is no laughing matter. Take the woman who filled her entire cart with Dannon Light & Fit containers and then maniacally sucked one down in the grocery store aisle because she couldn't help herself. Her friends and family staged an intervention shortly after.

In more recent years, Oikos (that's Greek for "Dannon") has relied on hunky men to hawk their product. Along with John Stamos's regular appearances, there's a clip in which a woman browses through various snacks on an "online snacking site" until she finds the one -- a man wearing a large Oikos container around his waist. They go mini-golfing, frolic in a meadow, and have a generally romantic time. It is implied that she will then fuck the yogurt.

But yogurt trends have changed over the years: Watery, low-fat, and sugar-laden flavors have given way to the full-fat Greek stuff. And with that, yogurt ads are also beginning to shift how they market their product. For instance, a recent commercial by Organic Valley served to highlight women's realistic morning routines instead of the sun-dappled woman-laughing-alone-with-yogurt schtick we're all used to.

And now, thanks to Oikos Triple Zero -- the "official yogurt of the NFL" -- men must suffer, too. Triple Zero is just Greek yogurt plopped in a different-color container and endorsed by Cam Newton with an emphasis on protein, so men can feel more secure eating what has been traditionally marketed as a feminine food.

Big Yogurt truly comes for us all.

More from The Cut:
The Bachelor Casting Call Was a Hellish 3-Hour Line to Nowhere
The Real Reason You'll Never Be Able to Parent Like a French Mom
The Only 6 Bras You'll Ever Need
Cameron Diaz on Water, Aging, and Those Body-Hair Comments
Sofia Coppola's Guide to Rome