As "A Christmas Story" plays on a 24-hour loop, we are instantly transported back to the world of that great holiday classic. But on our HD TVs and Blu-ray players, one thing is obvious: 1983 was a long time ago. So, you ask, where are the film's stars now?

It's no Red Ryder BB gun, but here's a Christmas gift to you: some answers.

In the spirit of Christmas, Scott Schwartz, who played pole-licking Flick, and Zack Ward, who played the bully Scut Farkus, reunited to discuss the film on "The View" late last week. Turns out the pole wasn't actually frozen metal -- it was just a plastic pole with a vacuum inside. But Ward, who is now an actor and stuntman, still got his comeuppance -- he says that kids challenged him to fights for years to come.

Schwartz took advantage of his famous tongue, anyway, as he would go on to work for a time in the adult film industry. He worked in production offices, for sales people, for agents, and even did a few turns on camera. As he said in a recent interview, it was all about having to make enough cash to survive following his early years in Hollywood.

"Being a child actor, while rewarding, is truly a bad job, we all grow up and IF the right people don't take to us and keep us working, most are out of work by 15-18 and have no idea what the real world is about," he told pop culture writer Jerry Sarvia. "Not everyone at every job you have/get brings you coffee and a bagel in the morning, asks what you would like for lunch and takes you out to steak/lobster dinners." 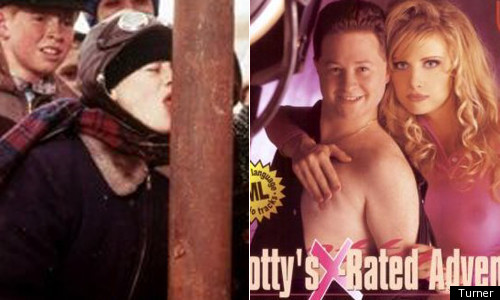 Peter Billingsley, who played Ralphie, would also go on to a career in Hollywood, though his was a bit more mainstream. In addition to continuing to do a bit of acting (with a cameo in "Elf," amongst other roles), he quickly began a life behind the camera. In fact, he's had a hand in some of the most successful films of the past decade. Part of the Chicago-area crew that includes Vince Vaughn and Jon Favreau, Billingsley has executive produced both "Iron Man" films and directed the hit comedy "Couples Retreat."

Still, despite all his more recent success, he's happy to talk about the film that put him on the map.

"It's amazing. I mean, with the volume of movies that are made consistently, it's just a miracle that this movie is loved and watched as much as it is. People ask me all the time, 'Are you tired of talking about it?' I'm really, really proud to be a part of it," he told About.com while promoting his sci-fi comedy, "Zathura." "You're really lucky... I mean, you do this stuff and you hope it turns out well and to get that lucky to be a part of a movie that just seems to endure the test of time... They show marathons and they make action figures of it now, from a little dialogue Christmas movie! It's just remarkable."

Melinda Dillon, who played Mother, has also continued in Hollywood. In fact, she's figured in a few major hits, including "Law & Order: SVU" and "Magnolia." She just finished filming the upcoming Steve Carell-Keira Knightley film "Seeking a Friend for the End of the World," and one can never forget her prominent role in "Harry and the Hendersons."

Darren McGavin, who played The Old Man, put in plenty of other efforts in show business. You may know him best as Billy Madison's dad. Eat your soup, Billy. Sadly, McGavin passed away in 2006.

And now, in case you can't watch TV for 24 hours straight, some selected clips from the holiday classic "A Christmas Story."