This past week, the Southern Baptist Convention (SBC) held a National Conference on " The Gospel, Homosexuality, and the Future of Marriage." The Conference made headlines when the President of the SBC, Dr. Russell Moore, disavowed reparative therapy and instead encouraged choosing celibacy. While encouraging life long celibacy is a bad idea to begin with, especially in light of how well celibate priests and abstinence only education worked out, it is still incrementally better than their stance as little as six months ago.

The level of deliberate ignorance was appalling, especially for those who clearly know what science, medicine, psychology and psychiatry have to say about transgender and intersex people. So, using language the SBC will understand, I think it's time we had a come-to-Jesus moment with the SBC on transgender people, and especially children.

There aren't a lot of Bible verses that are directly applicable to transgender issues, and in those few there are contradictions and a lot of room for interpretation.

"A woman shall not wear a man's garment, nor shall a man put on a woman's cloak, for whoever does these things is an abomination to the Lord your God." Deuteronomy 22:5

Strictly speaking, anyone who has worn a kilt or gone to a toga party could be deep trouble. Maybe women in pants. Additionally, what sorts of clothing are considered masculine and feminine has varied greatly over time. This can also be interpreted to condemn Christian faiths that ordain women. It's also worth noting that the next verse in Deuteronomy goes on to forbid taking birds out of their nests.

"No one whose testicles are crushed or whose male organ is cut off shall enter the assembly of the LORD." Deuteronomy 23:1

If this really is about the Bible, and not about transgender people, many who lost a limb in Iraq or Afghanistan would have a hard time getting into church: thousands of troops injured in Iraq and Afghanistan suffered traumatic perianal injuries and amputations. Is the SBC going to institute package checks on everyone with a purple heart? Or perhaps just a doctor's note? Additionally, many transgender people choose not to have surgery anyway.

Regardless, the New Testament seems to overrule Deuteronomy 23:1 anyway:

Then there are Genesis 1:27 and Mark 10:6, which echo each other in the sentiment that "God made male and female." This is the most commonly cited reference point for people who agree with the SBC, including speaker Denny Burk. At the same time, the Bible also states:

Additionally, we know that some intersex conditions cause people with a XY karyotype to have identities and primary sexual characteristics that are female. In other words, chromosomes aren't 100 percent indicative of sex or identity.

Research also shows transgender people tend to have neurological development that more closely resembles the gender they identify with than the sex they were assigned at birth. Similarly, reparative therapy on transgender people has failed for the same reasons it has for lesbians and gays: gender identity and sexual orientation appear to have similar and related biological origins.

These facts, plus years of medical research are why every mainstream medical and mental health professional organization has issued position statements endorsing affirming care for transgender individuals.

The consequences, particularly for transgender youth, of living in environments where they are not accepted are horrific. A recent study showed that when transgender children live in an unsupportive home, there was a 57 percent chance that they had attempted suicide in the past year alone. When children from the same sampling pool lived in supportive homes, the probability was only 4 percent. 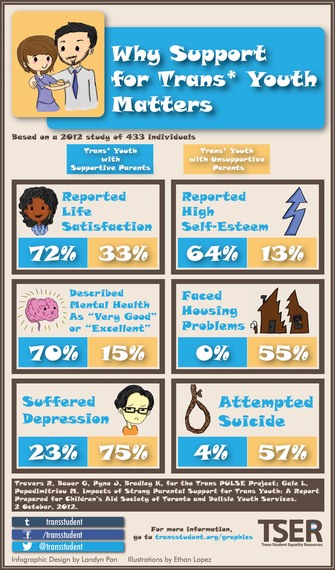 Just so we're clear here; putting a child in reparative therapy, telling them God will send them to hell if they don't stop being transgender, accusing them of being sick or delusional, punishing them for stepping outside of gender norms, and denying medically necessary care doesn't fall in the "supportive" category.

However, this is the prescription that the SBC and other conservative religious organizations have for transgender youth. The SBC, and other conservative religious groups have for whatever reason decided that transgender people are the greatest threat to American Christianity, while ignoring the data showing that 48% of Millenials are churchless in great part due to how churches treat LGBT people.

Imagine for a moment being one of those children though. Somewhere, alone, exhausted, defeated, despairing, believing neither God nor their parents can ever love them unless they do the impossible. They've decided that they're going to hell if they live, going to hell if they die, but dead at least offers a chance at oblivion, which is better than anything here.

Knowing all of this, who would decide that a 57 percent youth suicide attempt rate is an acceptable risk, based only a scriptural gray area? What sort of person would decide the chance to bury a child in "gender appropriate" clothing is worth the cost? Have they ever asked someone what it's like to lose an LGBT child because you couldn't accept them?

Most importantly, what does it say about your soul if you're willing to gamble the lives of other people's children, to put them at extreme risk of great or even fatal harm, on faulty assumptions?