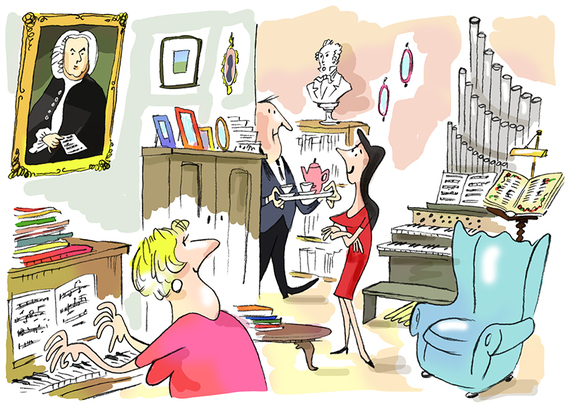 My friend's husband recently died, so on a foggy February morning, I ask her over for a cup of tea.

"Oh, no, please come to my house instead," she says, "and you can still see Bach's portrait before it goes forever to Leipzig."

Bach's portrait in her house?

Bach sat for only two portraits in his lifetime. One is in poor condition. The other, painted by Elias Gottlob Haussmann in 1746, is in excellent condition just a few blocks away from me in Princeton.

An elderly gentleman who introduces himself as the "house manager" lets me into my friend's house. "Madame is still getting ready," he says. "Make yourself at home." Curious, I look around the crowded living room, which is a cross between a church and a library.

Half of the room is occupied by a gleaming Holtkamp organ. Under a glass plate is a handwritten musical score with the name: Johann Sebastian Bach, signed with a flourish. On a lectern is an open Gutenberg Bible.

Suddenly, I am standing face-to-face with perhaps the greatest composer who ever lived. I know the famous portrait from the jackets of the old record albums my father used while preparing music for his church, and then later on from CD covers and busts sitting on pianos around the world.

Bach was 61 when his portrait was done. He is a stout man with a double chin and an unhealthily ruddy skin. He wears a white blouse with sleeves puffed at the wrists; over it is a black jacket with hard buttons. On his head, like a weird hat, is a white wig. In his right hand he holds a tiny piece of sheet music. On it is written, "Canon triplex á 6 Voc."

Then Judith enters, the widow of musicologist and philanthropist Bill Scheide, who died in November at the age of 100. She is momentarily distracted, shuffling around the room, but when she sees me in front of the painting, she brightens.

The house manager brings in a tray of tea, and Judith takes a sip. "Bill bought this painting 62 years ago," she says. "It was his most prized possession. Our mornings always started here, in this room, with the music of Schubert. Bill said that listening to Schubert first gave him permission to listen the rest of the day to Bach."

I had heard about the wave of emotion in church during Bill Scheide's funeral when Schubert's String Quintet in C Major was played. Arthur Rubinstein called this composition "the gateway to heaven" and wished to have it played at his own funeral.

"He looks very serious, huh?" Judith says, with a glance at Bach, "but he was a gentle man." She then sits at a Bösendorfer piano which I had completely overlooked.

"Whoever makes music, makes something of love," she says as she opens the Notebook for Anna Magdelena Bach. As we listen to Bach's Bist du bei mir ("Be thou with me") playing in the background, Judith seems to turn into a girl. Bach, who watches from the wall, is suddenly no longer the pompous man with the quizzical look that Haussmann gave him but a distant third husband watching his much younger wife.

I listen to the song's words and think of my father, who died three years ago today: "Be thou with me, and I will go gladly to my death and my rest."

"It is time that the cantor of St. Thomas Church return to Leipzig," Judith says, looking softly at the painting. "But how I will miss him."