This is the Thanksgiving after an election result which has opened the floodgates of hate crimes and incidents, and has filled our immigrant and minority communities with nothing short of terror. The reported hate crimes since election day are now numbered at 701, according to the Southern Poverty Law Center.

The Sunday after the election, a group of parents of kids attending Brooklyn Bala Vihar, a Hindu Sunday school where I teach along with other parents, were spat at by a man who said, "I don't like Indians and Pakistanis." And a Brooklyn Heights playground where my kids played often when they were small, was defaced with swastikas.

As well as being on the board of Sadhana, I am a part of a women's rights organization called Women for Afghan Women. There is enormous fear and bewilderment in our NYC Afghan community, and the staff has been holding the community close, organizing legal advocacy trainings and healing circles. 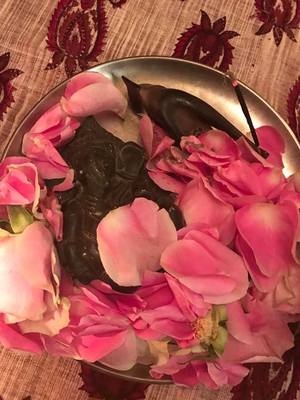 As with every crisis, this moment has within it the seeds of the solution -- the crazy, irrational audacity that fills us even when things seem hopeless; the thing that some call faith! Here are some nuggets of hope that have fueled me these past two weeks, and this Thanksgiving I will give thanks for these:

• In spite of being terrified of looming threats like the Muslim registry and mass deportations, forty brave Afghan women from Queens have signed up to go to the Women's March on Washington with Women for Afghan Women. This particular community is engaging and asserting themselves for the very first time, and it is so exciting to be witness.

• Several hundred people came together in that Brooklyn playground in a beautiful vigil to share messages of love. Children and their families cleaned up the hateful swastikas and replaced them with flowers and art.

• I have been adding my Hindu voice and presence to vigils and rallies and interfaith services since the election, where so many are sharing beautiful messages of commitment to love, unity and diversity. People are pledging to be there for each other, stand together, protect each other, no matter what struggles we must face.

This week, I have been inspired by the words of a Christian who sees humanity in every human, created in the likeness of the divine; a Jew whose beloved Torah calls him to welcome and embrace the stranger; and a Muslim who sees humanity as a body and each person a limb or organ: if one person is hurting, the whole body is sick. We Hindus see divinity in every single person, creature and aspect of the universe, and chant, "Vasudaiva Kutumbakam," or "the world is one family." The great religions of the world obligate us to treat each other, in spite of our differences, with love, compassion and respect.

While I share the deep concerns and fears about this moment when democracy and civil rights are in peril, not to mention the fate of our planet whose temperature and waters are rising, I give thanks for all those who have filled the streets and my heart with their words of love and peace, and their acts of resistance to hatred.

I bow my head to the thousands of Native Americans and indigenous peoples from around the world, and so many allies, who are risking their lives by camping and protesting at Standing Rock.

And I give thanks for the fact that two of my favorite justice warriors, two individuals whose love for each other is rooted in a solemn commitment to serve humanity, got married and honeymooned over these same two weeks. The road ahead will likely be full of struggle for those of us seeking justice; but we must not forget the love, joy and beauty that sustains us, making us fit for the journey.

I pledge to stand with every person and community in this country that is targeted with unjust and hateful acts and laws in the months and years to come. And I pledge to always make room for joy, beauty and laughter. Let us not be afraid, but instead build justice together.

May all beings in the world be happy.

Hinduism We Are One thanksgiving Religion Justice