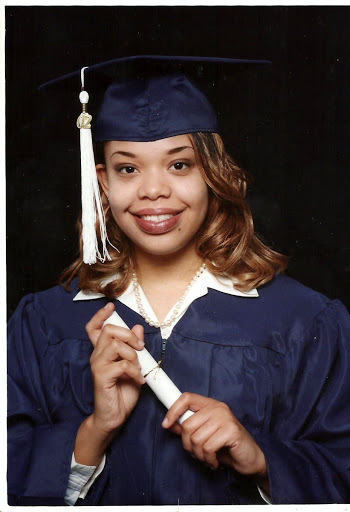 Have you ever glanced at a photograph from years before and had a rush of emotion and memories come flooding into your remembrance? This happened to me when I saw my college graduation photos a few weeks ago.

I looked at the cap and gown... the poised hands holding a piece of paper and a smile that reminded me of the years of prayer, faith, disappointment, tears and tough love that went into that moment. As a girl who had always been interested in the S.T.E.M. field, I remembered the small sliver of fear that would sometimes threaten to stop me from raising my hand in a hard science class because of the backlash I might receive.... in third grade.

The teacher made it very clear that girls had "no business" being interested in science and math. When I went home and recounted that feeling to my parents, I was met with a terse and unexpected response: "Don't let anyone stop you from achieving your goals -- students OR teachers," my mom advised. She said it with such.... fervor (on the brink of fury) that the hair on my arms stood up. It was a moment I have never forgotten.

I sharply remember the words of my Penn State Organic Chemistry ("O-chem") professor during a one-on-one tutoring session: He asked me "Why do you want to pursue such a hard major, anyway? You're a girl! Go study something fun and leave this hard stuff for us [men]." I felt a mixture of shock and embarrassment that quickly turned to anger. "So you're telling me that because I'm a woman I shouldn't be in your class or choose a hard science major??" I asked him.

He backed away from the conversation and continued to explain physical properties and advanced reactions. That brush with reality only increased my drive and made me set bigger goals -- not to prove the naysayers wrong, but to prove to myself that yes, I could and would be successful (someday) in the STEM field. Despite what my teachers, colleagues or classmates said, I knew that women had an important place in the field. During these years, my faith grew but so did my acute awareness of the ongoing bias that still exists between men and women in the STEM field.

Six years after the flash from the photographer's camera went out, I would have the opportunity to be the Keynote Speaker for the Top 10 Graduating Seniors at Memorial High School in my hometown of Port Arthur, Texas (formerly my own school, Thomas Jefferson High School). During that speech, I encouraged these students, the "Best of the Best," to dig deep within themselves during times of trials and tribulation and remember these ten important tips:

• Have faith in a power greater than yourself
• Listen to that still, small voice
• Make the right decisions
• Hard work equals success
• Accept failure
• Know yourself
• Be accountable
• Respect others
• Never forget where you started
• Be grateful

The message was entitled "Can Anything Good Come Out of This Place?" and it was well-received by many of the students and faculty.

Now, some six years later, if I could go back and speak to that room of alert 18 year-olds, ready to embark on college and the world, I would add a bit of advice that could have only been gained from living. I would tell that group of young men and women that the choices made early on, as early as elementary school, will define your professional life for decades to come. I would share with them the mantra that I began to say, believe and use in the fifth grade: "Hard Work, plus determination and faith in God equals success." But most of all, I would share the heartaches, the disappointments and the failures that led to my eventual successes.

I would remind the women in the room that before I would embark on a career as a scientist and researcher within the pharmaceutical industry, I would be challenged in countless ways. Both as a young girl with an affinity for and love of science whose third grade teacher made it clear that girls (especially not Black girls) just did not have the "brains" for hard science to the interviewer at a major Philadelphia-based pharma company who hired me based only on my curriculum vitae only to rescind the offer once I showed up for work.

If I had the opportunity to speak to that group of seniors that day, I would transport them back into my own ninth grade session with a high school counselor who advised me to "brush up" on home economics and forget AP Physics -- because as a woman, I didn't need that, she advised me. Those obstacles didn't stop me though.... I knew from an early age that not only was I good enough to "compete" with boys but that I had my own set of unique skills. Through her own previous struggles in a male-dominated oil and gas career, my mother had "prepared me for the battle." As I'd give my speech again to the Top 10 class, I would share with them some truths from my own life:

Yes, you will fail. Get back up and keep fighting! As a girl interested in Science, Technology, Mathematics or Engineering (S.T.E.M.), you may be teased, labeled ("Nerd!") or bullied. Don't let it stop you from achieving your dreams. In order to be successful in the STEM field, you do not have to adhere to a certain outward image -- the tomboyish nerd -- be yourself: You're good enough.

Success will require an early commitment to yourself -- a commitment which echoes the advice that I heard growing up: Just because someone says you can't achieve something does not make it true. Ignore the naysayers and chase after your goals despite the critics. Don't be afraid of failure because failure is imminent. Expect and prepare for failure -- draft a few "back-up plans," but don't get discouraged along the way. If you aren't blessed to have the parental support system that I (and many others) have had, create your own: Purposefully seek out mentors who have succeeded despite the odds. Throw out the perfectionist in you-- Perfection is an illusion. The climb toward success will be raw, gritty and at times so steep that you will cling on for dear life. C-L-I-N-G, my dear. This too shall pass!

Make it to college graduation and then begin to conquer post-graduation goals -- never stop achieving.

According to the U.S. Department of Commerce's "Women in STEM: A Gender Gap to Innovation" summary, "Despite the fact that the wage premium for women in STEM jobs is higher than that for men, there are fewer women than men in STEM jobs and attaining degrees in STEM fields."
Although more women are graduating from college than ever before, of the 48 percent of women who make up the U.S. workforce, only 24 percent hold STEM jobs.

If I could give that Top 10 class (or you, right now) a simple piece of advice it would be this:

Do not give up. Don't lose hope! Truly, you can succeed in STEM or any other field you choose despite your gender, racial background or your economic situation. Look within and listen to that still, small voice. Have faith in a power greater than yourself. And believe that it is possible. And it will be.

Global Clinical Trial Manager and Scientist in the Pharmaceutical Industry