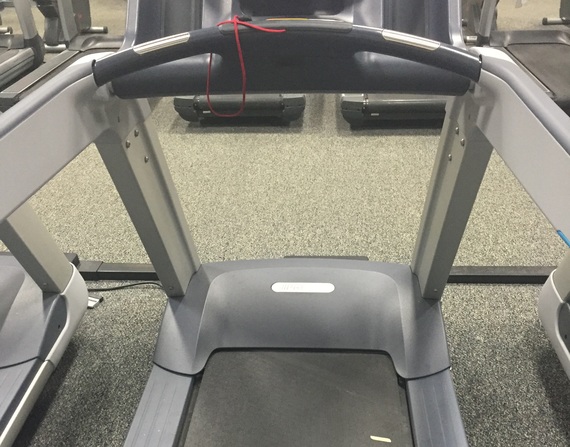 This is not a story about weight loss -- unfortunately. Nor is it a fitness how-to. I'm not the right person to write that. This is simply about one dad's motivation to get through his workout.

Like many adults, I've struggled with those extra pounds over the years. And, like most parents, part of the problem has been finding the time and energy to fit in a fitness regimen. The other part of the problem is that I love food, but that's a separate story.

My doctor has a rather poignant cartoon on the wall in his exam rooms. It's a simple drawing that shows a doctor talking to a slightly overweight, mid-aged patient by cartoonist Randy Glasbergen. The caption reads, "What fits your busy schedule better, exercising one hour a day or being dead twenty-four hours a day?"

A few years back, seeing that cartoon enough times, I committed to doing what I could to not end up dead too soon, because my schedule really couldn't handle that.

I started hitting the gym a few days a week, going the only time I could: before the kids wake up. That means, on a workout day, I have to be out the door around 5:30 a.m., so I can be back home by 6:45ish.

There have been good and bad spells over the years, but I keep going back and reaffirming the commitment.

I've also tried various workouts in that time -- spin bikes, ellipticals, weights, and treadmills, and combinations of those. All can work, I'm sure, but what has helped most is to run on the treadmill. I know this because when I run consistently, I see the weight drop off and the belt loosen.

There's only one problem: running is hard.

As one runner friend said to me, in the first few minutes of a run, your body enters a period of shock, essentially saying: "What the heck are you doing to me?" To run is all about hitting that wall and pushing through it. And then doing that over and over again.

I'm not a natural runner. I don't have a thin frame or a particularly smooth gait. I've found the only way to get the time on the treadmill I need to have an impact on my health is with a dose of motivation. That's the only way to push through when my body just wants me to stop. The problem is that some of the typical motives other people use don't work for me. I don't really care how I look in a bathing suit. I'm married and have kids, any pride based on narcissism evaporated when we bought our second minivan. And I'm not training for a marathon. I truly don't have time for that.

Yet, I do have one thing that motivates me.

A few years ago, I started saying a little phrase to myself which helps me get through that next wall. Heck, it even helps me get out of bed and to the gym some days.

It may sound like a slogan for a geriatric commercial, but it's not.

You see, I have three daughters.

As a dad, I have a lot of jobs I have to do for them and their brother -- making school lunches, picking them up places, preparing dinner, reading bedtime stories and all the other parenting stuff we do each day without even thinking about it.

But I think about that cartoon and about not being dead too soon, and I know there is one job I have in my future as a dad of daughters that I simply cannot miss. And it involves walking with them.

Who the heck knows if any of my daughters are even going to get married? As long as they're happy, I really don't care. I'm really not one to think much about such things, and I certainly don't want them thinking about that stuff either -- despite Disney's efforts to make that every girl's obsession. There's really no pressure here.

But chances are that one of them will get married. And, if it happens, I better damn well be there to do my job.

For me, the phrase has become more than about some fanciful day off in the future that may or may not happen. It's about being there for them every day I can, for as long as I can: For the walks on the beach, for the hikes in the woods, for the strolls at the park, for the random moments I cannot yet imagine. I want to be there, walking through it with them, until it's not my job anymore.

When I am running and I hit that wall, "I run so I can walk" is all the motivation this dad needs.

Now if I could just find a phrase that can prevent me from eating so much.