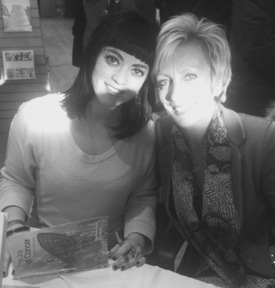 "This place where you are right now, God circled on a map for you" -Hafiz.

A few months ago Arianna Huffington's name appeared in my inbox introducing her new #ThriveOCourse, then, in the same week in my YouTube feed with her talk at Google, and finally, perfectly timed on the cover of my hardcopy of April's Success Magazine. The last one was so random and in-my-face that I finally stopped and paid attention. I read the article and was immediately turned on to her Thrive message. I ransacked the web for any Thrive focused conversation I could find, bought the book and signed up for her six-week course.

The course is jam packed with practical, no-brainer, and effective tools to create change. The last of six lessons from the course begins with these words spoken by Arianna:

"Giving to others is an incredible way to put everything that's going wrong in our lives in context...and has the only possible side effect of a blissful buzz of knowing that you've made a difference in your life, in the course of making a difference in the lives of others"

The lesson titled From Go-Getter to Go-Giver, focuses on giving back to others and the power this has on our success and well-being.

Four and half years ago, I met Olga Munari Assaly. In April of 2006, Olga was diagnosed with breast cancer. Just a few days after her diagnosis, Olga registered to participate in The Weekend to End Women's Cancers, a two-day walk held in Montreal and Toronto to raise funds for cancer research. From there began the beautiful journey of turning the challenge of cancer into opportunity, again and again. Olga raised thousands of dollars for the cause that she had just been unwillingly intimately acquainted with. So much so, that she became the top earner and was asked to give the opening speech for the upcoming fundraiser. That following August, while undergoing chemotherapy, Olga told her story to the thousands of people present during the event's opening ceremony and proceeded to walk 60 km along side her team, Olga's Butterflies.

Over the course of the decade since Olga's diagnosis she has given dozens of talks, including speaking at TedX Calico Canyon, raised thousands of dollars, and inspired a multitude of people to rise above fear and find opportunity in challenge; a true champion, inspiring one person at a time.

At the cusp of her five-year remission anniversary, Olga and I were introduced through a mutual friend. To celebrate this milestone, Olga wanted to write a book telling her story and so she enlisted my help as a writer. Just a few months before meeting Olga I'd held my best friend Jade's hand as she took her last breaths after a three-year battle with an aggressive form of breast cancer. The experience had left me heart broken, and yet, more determined than ever to live fully. I wanted to honor her legacy by using my writing talent to tell a story that would inspire others who were battling cancer. In this loss, I found the courage to take on this two-year project while working full-time in a demanding role as an I.T. project manager for a large financial institution. Olga talked and I narrated, joining forces to create The Joy of Cancer: A Journey of Self-Discovery, a memoir that tells the inspiring story of how one woman used her breast cancer diagnosis to slowly transform her life and touch thousands of others, living the third metric from day one of the challenge. In the true spirit of giving, Olga went as far as donating all her proceeds from our book to cancer research.

There is much to learn from someone who finds strength and meaning in giving to others when they are battling a scary dis-ease such as cancer. During a time when we would typically recoil into ourselves in fear and scarcity, giving is the last thing on our mind. Olga's story is a testimony of how giving is force that multiplies and benefits both the giver and the receiver.

Shortly after our book was published Olga and I parted ways due to a difference of opinion that, try as we might, we could not resolve. It was a sad time for both of us, to have a project that touched so many lives end up wedging us apart. The success of our accomplishment felt tainted by this rift. My brilliant friend, Jorge Coutinho, who tragically lost his 5 year old daughter to cancer last year puts it simply:

"The only thing that truly ever matters is love"

I wholeheartedly agree having had my best friend cross the great divide. It's unfortunate that being touched by death is what often makes us realize the fundamental priority of love. This hard learned lesson enriches my life in some way every. single. day.

The week of the final lesson I contacted Arianna to share this anecdote of the power of contribution with her. The final plot twist: her invite to take this online at HuffPost. I couldn't think of a more loving way to re-connect than by honoring Olga's commitment to giving, and, sharing a part of her story here, with you, today. As a result of this post, Olga and I have come full circle in a way that only synchronicity can orchestrate so gracefully.

This place circled on the map, it's exactly where I am meant to be; somewhere between thriving and having lunch with Olga.

The Joy of Cancer: A Journey of Self-Discovery
by Olga Munari Assaly

The Joy of Cancer: A Journey of Self-Discovery
by Olga Munari Assaly, Kim Mecca